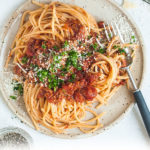 A traditional Spaghetti Bolognese recipe which is rich, meaty and full of flavour. This traditional bolognese sauce requires slow cooking to develop the rich and meaty flavours, and uses fresh and good quality ingredients for an authentic taste.

Growing up, my mother never really cooked Italian food. I think our closest encounter with Italian cuisine was Pizza Hut, and I loved it! When she did attempt any Italian food, it was likely to have been tainted with some coriander (cilantro) and eaten with chopsticks.

This might go some length in explaining why, for many years, I failed miserably in attempting to recreate a decent bolognese sauce at home.

No matter how many different recipes I tried, how expensive the red wine or for how long I simmered the sauce, a bottle of ready-made bolognese sauce from the supermarket always tasted better.

And I accepted this defeat on the grounds that, well, I wasn’t Italian; that certain dishes were out of my realm because of my gene pool.

But this particular recipe for a traditional Spaghetti Bolognese caught my eye because it contains neither red wine, stock nor bacon, ingredients which are so commonly found in a traditional beef ragu.

I attempted this Spaghetti Bolognese recipe out of curiosity and I have never looked back since.

For me, this is the bolognese sauce which I have been trying to recreate at home for so many years.

We all know that the secret to a great tasting dish is to use the best quality ingredients. I think this is the best bolognese sauce recipe because:

What Type of Meat to Use for a Bolognese Sauce

Whenever a recipe calls for minced meat (ground meat), I always go out of my way to make my own, and I have been doing this for as long as I can remember.

In fact, my mother never bought minced meat either. I have vivid recollections of her mincing her own meat with a menacing Chinese meat cleaver in both hands, rapidly hacking away with such aggression that you wouldn’t want to disturb her on such occasions.

I used to mince meat in my food processor; it does a decent job but the meat is likely to be very finely chopped in this method, almost paste-like if you process it for too long.

The better approach is to use a proper meat grinder, and KitchenAid owners will rejoice in knowing that the meat grinder attachment does a fabulous job in grinding meat in coarse or fine textures.

The simplest approach, of course, is to ask your butcher to grind the meat for you.

And the reason why I think freshly-ground mince tastes best is because you can choose the cut of meat yourself; selecting a good-quality cut of meat means that you can control both the flavour (some cuts of meat taste better than others) and know exactly what it is that you are eating.

For this Spaghetti Bolognese recipe, I like to use a cut of beef which the French and Swiss call entrecôte, which is termed as rib-eye or sirloin in other parts of the world. It is a flavourful cut of beef with a good amount of marbling, making it a good choice for a bolognese sauce which needs a robust, meaty base.

How to Make Spaghetti Bolognese

A bolognese sauce is based on an Italian ragu, which is a slow-cooked meat sauce made with tomatoes.

Slow-cooking allows the ingredients in the sauce to meld and intensify, as well as giving the meat a chance to become incredibly tender and almost dissolve into the sauce.

Of course, it is possible to make a bolognese sauce in 30 minutes or less, but it won’t be as rich, and the meat will still have a bit of bite.

So where possible, I recommend cooking the bolognese sauce for at least 2 hours for maximum flavour, and I also recommend doubling the recipe because it is that good!

Start by blitzing the vegetables in a food processor. Finely chopping the vegetables this way allows them to literally melt into the sauce later (and your kids won’t notice that you snuck healthy stuff into this dish).

Next, add the minced beef and cook until there is no trace of pink left. If you have a small pan, you might want to do this in batches, otherwise the meat will steam instead of fry and become golden brown. And you want the meat to brown properly because this caramelisation adds flavour to the sauce.

Stir in the tomato paste until all of the meat is coated. As tomato paste is highly concentrated, you need to cook off the raw flavour for a few minutes.

Then add the tinned tomatoes, together with some sugar, salt and pepper. It might look like a lot of tomatoes, but as you will be slow-cooking this bolognese sauce for about 2 hours, some of the liquid will evaporate during this time and the sauce will thicken considerably.

Also, the generous amount of tomatoes will cook down to produce a really flavoursome tomato sauce.

Many bolognese sauce recipes call for dried herbs, but I like to use fresh herbs. Plus, they seem to grow wild on my balcony and I need every excuse to use them where possible.

I don’t bother to chop the herbs ; I simply place large twigs – stems and leaves – directly into the sauce for maximum infusion of flavour. After 2 hours, I try to fish out the stems, although most of the oregano leaves will have fallen off, and this is totally fine.

During the cooking time, make sure you give the bolognese sauce a good stir now and then to make sure nothing is sticking to the pan. If the sauce is thickening too much, you should also add some boiling water to thin the sauce to your liking.

How to Serve Spaghetti Bolognese

I always recommend cooking the pasta in the bolognese sauce for a few minutes before serving, thereby allowing the pasta to absorb some of the flavours from the sauce.

This means that you will have to carefully estimate how much pasta and how much sauce you will need as any leftover pasta cooked with the sauce will become thick and gluggy when reheated.

For extra savouriness, I recommend grating fresh parmesan over the dish just before serving, as well as a good sprinkle of fresh herbs to liven up the dish.

How much bolognese sauce per person? This, of course, varies from person to person! But I estimate roughly 1 cup (250 ml or 1 large ladle) per adult.

Which pasta to serve with bolognese sauce? The choice is endless! You can’t go wrong with spaghetti or fettucine, but short and ribbed pastas (such as penne rigata or rigatoni) also work well with a meaty bolognese sauce. 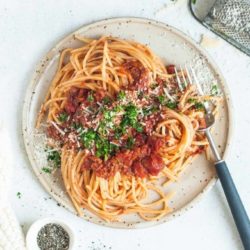 A traditional Spaghetti Bolognese recipe which is rich, meaty and full of flavour. This traditional bolognese sauce requires slow cooking to develop the rich and meaty flavours, and uses fresh and good quality ingredients for an authentic taste.

For the Spaghetti Bolognese

Once you have made the Bolognese Sauce, you can serve it with any pasta of your choice. The uses for Bolognese Sauce are endless. It’s lovely added to some béchamel sauce for a creamy pasta sauce, or you can go one step further and make a lasagne, substituting the tomato sauce for this Bolognese Sauce.

I also sometimes use leftover Bolognese Sauce as a base for a Cottage Pie, in which case I would add some mushrooms and frozen peas when reheating to make it a bit more substantial.

Nutritional information below is just for the Bolognese Sauce.

This recipe was first published on 9 December 2013. It has been updated with new photos and more comprehensive recipe notes.