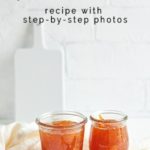 An easy Orange Marmalade recipe with step-by-step photos. Perfect at breakfast with some hot toast or fruit bread. Add some fresh ginger to turn it into an Orange Ginger Marmalade.

One thing I love about summer is the abundance of fruit and trying to preserve as much of summer as I can into little glass jars.

I have made several batches of Peach & Raspberry Jam, as well as a simple Apricot Jam, not to mention the Strawberry Jam which has been disappearing as fast as I make it.

We always have a constant supply of oranges at home, either to eat as is or to freshly squeeze at breakfast.

But I never really contemplated the idea of making orange marmalade at home until I was one day treating myself to some homemade fruit bread and realised that only orange marmalade would be the perfect accompaniment.

I gathered all of my books on making jam and was somewhat surprised to find that there were so many varied recipes for orange marmalade.

Some marmalade recipes required the orange rind to be soaked in water for 3 hours. Some required straining the fruit mixture through a piece of muslin overnight.

I ultimately settled on a marmalade recipe from one of my many French cookbooks which perhaps wasn’t the quickest recipe but it didn’t require any overnight preparation.

It was also a recipe which used the least amount of sugar; jam recipes often call for 1:1 ratio of fruit to sugar and which makes sense if you are preserving for the long haul (i.e. if you are making jam which might be eaten 2 or more years later), but which isn’t necessary if you know you will consume the jam over the coming weeks.

This particular orange marmalade is quite sweet, primarily because it uses sweet, blonde oranges and not the bitter Seville oranges.

Also, this marmalade recipe is quite persistent in trying to remove as much pith as possible, and blanching the peel beforehand helps to soften it so that you are not confronted with a chunk of bitter peel later.

I happen to love, love ginger jam and so I grated fresh ginger into half of the orange marmalade just before bottling them to make a small batch of ginger marmalade. It was also a quick way to add more variety to my current jam collection.

I quite like this marmalade recipe and would be curious to try it with grapefruit!

How Long to Boil Jam

Making jam involves boiling the fruit with sugar in a large saucepan over high heat until it has thickened nicely.

How long you need to boil the jam depends on how much liquid there is to start with, as you essentially want most of the liquid to evaporate so that the mixture can thicken.

Obviously, some fruits contain more water than others, so some jams are relatively quick to make, whilst others require a bit more time.

Oranges, for example, contain a lot of water, so making marmalade generally takes a bit longer than other jams.

For the recipe below, I estimate that you need to boil the mixture on high heat for almost 30 minutes until you reach setting point.

The best way to test if a jam has reached setting point is to use a digital thermometer, sugar thermometer or jam thermometer.

However, I find that, even when using a thermometer, sometimes the jam is ready before or after reaching the desired temperatures.

So in addition to using a thermometer, I also use the jam plate test.

The jam plate test, also called the cold plate test or wrinkle test, is an effective way to test if your jam has reached setting point.

While you are making the jam, simply place 3 or 4 small plates in the freezer.

To test if your jam is ready, place a spoonful of hot jam onto the cold plate, and use your finger (or a teaspoon) to run a line through the blob of jam.

If the jam starts to fill the line, this means that the jam is still too liquid and runny, and that it is not yet ready.

If the line remains and the jam does not fill the gap, then the jam has reached setting point and is ready.

How to Make Marmalade 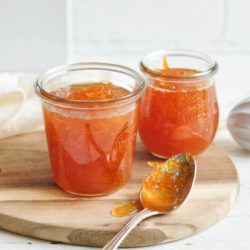 An easy Orange Marmalade recipe with step-by-step photos. Add some fresh ginger to turn it into an Orange Ginger Marmalade.

To prepare for the Jam Plate Test

To prepare the orange peel

To prepare the orange flesh and juice

To calculate how much sugar to add

To cook the orange marmalade

SETTING POINT TEMPERATURE
When making this orange marmalade, I frequently find that the mixture reaches setting point at about 110°C (230°F). But I would advise to start checking for the setting point once the temperature reaches 105°C (220°F).

IF YOUR JAM OR MARMALADE HAS NOT SET PROPERLY
If you end up bottling jam or marmalade which has not set – and you can tell if you tip the jar and the mixture sloshes around inside – simply empty the jars back into a large saucepan and reheat them until they have reached the desired thickness. You can try this a few hours after bottling when the jam has had time to cool, or even the next day. The jam should not suffer for this second cooking attempt, although you will have to rewash and sterilise all the jars again.

USING JAM SUGAR
If you are using jam sugar (sugar with added pectin), you should leave out the lemon juice and orange seeds.

HOW TO MAKE GINGER MARMALADE
To make ginger marmalade, grate in some fresh ginger to the finished marmalade while it is still hot. Add as much or as little ginger as you like. You can do this to the whole batch, or only some of the batch.

This recipe was first published on 7 October 2012. It has been updated with new photos and more comprehensive recipe notes.