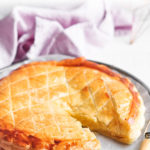 Celebrate the Epiphany with this classic Galette des Rois with Frangipane, also known as a French King’s Cake.

What is a Galette des Rois?

A Galette des Rois is a cake or tart which is traditionally eat in France on 6 January to celebrate the Epiphany.

A Galette des Rois is comprised of a top and bottom layer of puff pastry, with a filling made from ground almonds (called a frangipane).

Hidden inside the Galette des Rois is a bean or small trinket (called a fève), and whoever discovers this inside their slice is crowned king or queen for the day.

Usually right after Christmas, many bakeries and supermarkets will start selling Galette des Rois on their shelves.

The traditional Galette des Rois has a frangipane filling made from ground almonds, but it is not uncommon to find some made from ground hazelnuts or other nuts, or even with chocolate added.

The fève you will find in most store-bought Galette des Rois is a small plastic figurine of a religious figure.

Some high-end bakeries might, however, use porcelain figures instead, which means that adults and children have to be careful when biting into their slice of Galette des Rois!

Long before my daughter was born, I began collecting little vintage porcelain Hello Kitty trinkets which are, although collectible, intended to be used as a fève in a Galette des Rois. I first came across these trinkets at a flea market in France and have slowly been adding to my collection whenever I see ones that I like.

These days, you can even find fun ones at the supermarket; my most recent find were the Minion characters which were sold with packets of ground almonds, and I knew my son would love them.

The first time I made a Galette des Rois, I followed Rachel Khoo’s recipe for Galette des Rois which uses ground hazelnuts in the filling and is baked into the shape of a crown.

The Galette des Rois recipe below is a more traditional recipe which uses an almond frangipane filling. Here, the frangipane is mixed with a thick custard (crème pâtissière) to produce a more creamy and substantial filling.

I usually end up making at least Galette des Rois every year, just to give each child a chance to find the fève 😉 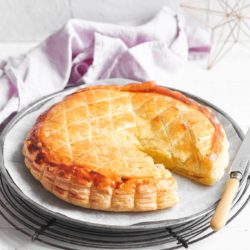 To make the crème pâtissière

To make the almond cream

To make the crème pâtissière

To make the almond cream

This recipe was first published on 5 January 2018. It has been updated with new photos and more comprehensive recipe notes.