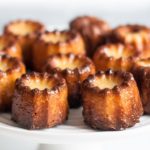 Cannelés are golden and crispy cakes with a custardy centre, flavoured with a hint of rum and/or vanilla. Recipe for Cannelés with step-by-step photos, with instructions for using copper cannelé moulds or silicone cannelé moulds. Recipe also for Mini Cannelés.

If you have ever travelled to France, you may have come across these little specialty cakes called cannelés (also called canelés or cannelés Bordelais).

Unlike their more successfully exported cousins, the madeleines and macarons, cannelés are not so well known outside of France. Yet within France, they are a delicacy.

Cannelés are little scalloped cakes which have a crisp, caramelised coating with a slightly chewy and soft, custardy centre. The contrast in texture between the crunchy exterior and sweet interior make these cakes, in a word, addictive.

In France, you can find cannelés at many bakeries and pâtisserie shops, including Paul, but the best are perhaps sold by Baillardran.

Although the shop-bough cannelés are delicious, once you have tasted freshly baked and still warm cannelés, you will realise that homemade cannelés are by far the best.

Some foodie friends were recently discussing recipes for cannelés, when it dawned on me that I actually owned a frightfully expensive set of copper cannelés moulds, purchased during a trip to Paris with good intentions but, 10 years later, still remained bright and shiny in their unused condition.

Although, when I first bought the moulds, I was rather dismayed to later find that recipes for cannelés were rare; none of my cookbooks on French cuisine (both in English and French) had a recipe for these cakes, whilst most online recipes were not so inviting.

So when presented with the opportunity to use my long-forgotten copper cannelés moulds, I was anxious to conduct a little experiment of my own.

Despite my hesitation towards silicone cake moulds in general, I picked up a cheap silicone cannelés mould when we were in France over Christmas.

Upon arriving back in Zurich, I proceeded to attempt Rachel Khoo’s recipe for cannelés, first using the silicone moulds as per her recipe, and then with the copper moulds.

And without intending to, I suddenly fell into an addiction.

The first batch of cannelés made using silicone moulds turned out exceedingly well.

They were crisp and caramelised on the outside, with the right amount of burnish and with the requisite soft, custardy interior. The contrast in taste and texture between the sweet, crunchy crust and squidgy inside made them moreish and plainly addictive.

Rachel Khoo’s recipe is straightforward with no fuss – no beeswax, no freezing. You do have to make the batter up to 2 days ahead of time to allow the gluten to relax and swell, but this happens to be an advantage if, for example, you plan on serving these to guests and want to get some of the preparation done in advance.

I was so surprised by how well my first batch turned out with the silicone mould that I was actually somewhat nervous to use the copper moulds, lest they turned out to be inferior and a waste of money.

But I forged ahead with my experiment, and the second batch made with copper moulds disappeared so quickly that I didn’t even have a chance to photograph them.

Nor did I get a chance with the third and fourth batch.

But the cannelés made using copper moulds were more crisp on the outside and tasted just as divine.

Due to the butter which is used to grease the copper moulds, this batch did have a slightly buttery aftertaste compared to the batch made using the silicone mould but, overall, it was hard to judge which was better.

As the copper cannelé moulds conduct heat much better than their silicone counterpart, the cannelés have a crispier coating and also remain crisp for longer.

However, I found (over many batches) that, if you heat the silicone mould until it is quite hot (i.e. to the point where it is almost smoking), you can achieve a similar crispy exterior.

Perhaps the best way to conclude is that you can absolutely make delicious cannelés using silicone moulds.

Indeed, if you plan to make a large batch, it would be more economical to use silicone moulds, rather than purchase the individual copper moulds which can cost up to $30 each.

I purchased a relatively cheap silicone mould in France by Guy Degrenne and would highly recommend this one.

The regular-sized silicon cannelés moulds tend to have 8 holes; if they have more or less than 8 holes, the cakes will be bigger or smaller than what is usual, so you will have to adjust the baking time accordingly.

How to Make Cannelés

{For a printable recipe, please scroll down}

How to Make Mini Cannelés

To make mini cannelés, follow the same recipe and instructions below.

With my mini cannelé mould, I found that the cakes around the edges of the mould browned nicely after 30 minutes, but that the cakes towards the centre were still pale and needed more time in the oven. 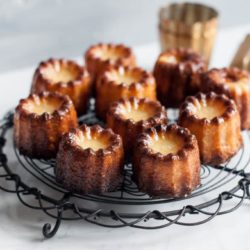 Cannelés are golden and crispy cakes with a custardy centre, flavoured with a hint of rum and/or vanilla. Recipe for Cannelés with step-by-step photos, with instructions for using copper cannelé moulds or silicone cannelé moulds. Recipe also for Mini Cannelés.

SIZE OF CANNELÉ MOULDS
The copper cannelé moulds I have used in the recipe and in the photos above are 55 mm in diameter.

HOW TO MAKE MINI CANNELÉS
* Follow the same recipe and instructions as above.
* After the initial 15 minutes at 240°C/460°F, continue baking the cannelés at 190°C/375°F for 30 to 45 minutes. The timing will vary depending on the size of your mini cannelé mould.

USING COPPER MOULDS FOR THE FIRST TIME
If you are using copper cannelés moulds for the first time, you will need to season them first. This comprehensive webpage covers all you need to know about cannelés, as well as instructions for seasoning your new copper moulds (scroll down towards the bottom of the page).

USING A WHISK
Many recipes will tell you to avoid getting too much air into the batter and, therefore, to not use a whisk. I wasn’t aware of this before conducting my experiment, and used a whisk with no detrimental effect. However, I would recommend whisking the batter only very gently. If there is too much air in your batter, the cakes risk rising like a soufflé and perhaps overspilling. During baking, the cakes will rise slightly (like a soufflé), but they should fall back down again during the baking process.

GOLDEN AND BROWN CANNELÉS
Part of the joy of these cakes is the crisp, caramelised coating. To achieve this, the cakes will need to be baked until quite brown and golden, but not so much that they are burnt. Check the colour after the specified time in the recipe and, if you need to bake them for longer, keep checking at 5 minute intervals or so.

USING A BUNDT PAN OR MUFFIN PAN
If you don’t own a copper or silicone cannelés moulds, at a pinch, you could use a non-stick mini Bundt pan or a muffin pan and follow the same instructions as for the copper moulds.

This recipe was first published on 18 February 2014. It has been updated with more comprehensive recipe notes.