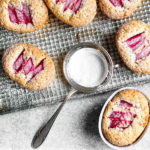 Delicious Rhubarb & Vanilla Friands to make the most of vivid pink forced rhubarb.

One of the most popular recipes here on Eat, Little Bird is for Lemon Drizzle Friands, a little cake which is widely popular in Australia and which has surprisingly intrigued so many readers worldwide.

What is a Friand?

A friand is based on the same recipe as that used for a popular French cake called a financier; the latter are baked in a special tin so that the cakes resemble gold bars (think of a mini loaf cake but with a height of about 1 cm).

The story goes that, in the early 1990s, a French chef working in Double Bay in Australia reinvented the financier by baking it in a metal aspic mould, thus producing a much larger cake which ultimately had more appeal to the Australian public. The friand was hence born, its name simply meaning “little cake” in French.

However, a word of warning: if you were to walk into a pâtisserie in France and asked for a friand, you would literally be asking for a “little cake”, of which there are many different types.

What the Australians call “friands” seems to exist only in Australia, and despite its growing popularity internationally, it remains unknown in France. Because in France, they have the “financier”. Comprend?

And as my French mother-in-law once queried, why would someone bake a cake in an aspic mould?

The aspic moulds in question are intended to be used to make oeufs en gelée, or eggs in aspic. They are oval in shape and typically have a star or diamond embossed in the bottom of the tin, although the former is what is generally used to make friands.

It is also possible to find similarly-sized oval tins without any shape embossed in the bottom.

Where to Buy Friand Tins

These aspic moulds can be found in most specialty kitchenware stores in France, such as at E. Dehillerin. They are sold individually as plastic moulds, or as metal tins with or without non-stick coating.

If you come across these moulds and want to buy them for making friands, I would recommend buying the non-stick ones; the star embossment will produce a nice pattern on the bottom of your cakes, but the plain moulds will allow your cakes to sit flat.

These individual moulds are also great for storage as they stack easily and take up almost no space.

In Australia, where aspic moulds have sensibly been recycled as bakeware, you can find a 6 or 12-hole friand pan wherever cake and muffin tins are sold.

If you live outside of France and Australia, your best bet for finding a friand mould is on the internet (see links below).

If you can’t find a friand mould, don’t fret – a normal muffin tin will work just as well. See below for my tips on using other shapes to make these delicious cakes.

In France, financiers tend to be plain cakes which derive most of their flavour from the butter in the recipe, which is traditionally melted and browned to produce a nutty flavour.

The Australians use the recipe for financiers merely as a blueprint for their friands and always add other ingredients, such as lemon or berries.

Please see my recipe for Blueberry Financiers for a twist on the traditional financier.

Now that forced rhubarb is in season, I couldn’t resist adding them to a batch of friands recently, and they worked magically.

Forced rhubarb has a very short season – between late winter and early spring – and range in colour from pale pink to dark crimson.

When used in baking, the rhubarb keeps it shape and hue, thus adding a dramatic pop of colour.

I love to use forced rhubarb in cakes (such as this ever-popular Rhubarb Custard Tea Cake) and I am completely addicted to this Rhubarb & Strawberry Crumble which I make at least once a week during the forced rhubarb season (hint – it’s delicious eaten cold at breakfast!).

How to Make Friands

To see my step-by-step photos for making friands, please have a look at my recipe for Lemon Drizzle Friands or Raspberry Friands. 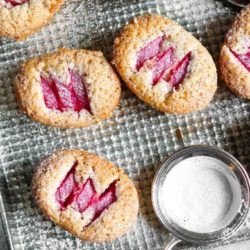 Rhubarb & Vanilla Friands to make the most of vivid pink forced rhubarb.

USING A MUFFIN PAN
The friand moulds are about 1/2 cup in capacity and are deeper than the standard muffin mould. So if you are using a muffin pan to make these friands, you may need to adjust the cooking time a little.

MINI MUFFINS
In France, it is common to find financiers sold in mini muffin shapes, often sold in little packets which are great to give as gifts. You can use this recipe to make about 20 mini muffins, but be sure to adjust the cooking time accordingly.

USING OTHER BAKING MOULDS
To that end, you could make friands or financiers in any shape, but just adjust the cooking time accordingly. One of my favourite cafés in Zurich makes financiers in a small flat pie tin. There is something so welcoming about a cake in such a generous size!

This recipe was first published on 7 March 2016. It has been updated with new photos and more comprehensive recipe notes.