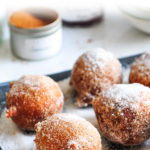 Nothing beats hot and fresh cinnamon donuts, and this is an easy donut recipe using yeast to produce light and fluffy donuts rolled in cinnamon sugar.

I love, love donuts. I particularly love them hot, fresh from the vat and sprinkled with lots of sugar and ground cinnamon. Give me a donut and a cup of coffee for breakfast and I’m a happy camper.

Dunkin’ Donuts recently opened where I live in Zurich, but before their arrival, cinnamon donuts were a rare find here.

And this is pretty much how and why I discovered cooking; the absence of familiar foods in my new homeland meant that I had to try and make them myself at home if I wanted to satisfy my cravings.

This easy donut recipe comes from Gary Mehigan of MasterChef Australia. He makes cooking everything look easy, and these cinnamon donuts are among the best I have ever eaten!

You can watch Gary Mehigan make his cinnamon donuts here:

Most donut recipes require you to make a yeast dough, but this recipe uses a yeast batter.

A yeast dough is very much like a sweet bread dough. Once the dough has risen after the first session of proving, you cut out doughnut shapes from the dough (like you would with a cookie dough). The cut-out shapes typically require a second session of proving before being deep-fried in oil.

With a yeast batter, you only require one session of proving, which takes about 45 to 60 minutes. The mixture is very liquid, so you will instead be scooping the batter straight into the oil to cook.

If you are familiar with making Danish Aebleskivers (which is traditionally made with a yeast batter), the donut recipe below is very similar.

These homemade donuts are incredibly light and fluffy – not dense and chewy which leaves a heavy feeling in your tummy.

These cinnamon donuts are perfect to eat as they are, but I love to serve them with some strawberry jam or even a generous spoon of chocolate hazelnut spread. 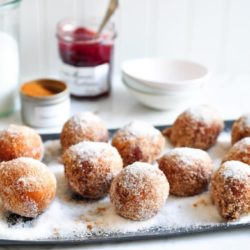 Nothing beats hot and fresh cinnamon donuts, and this is an easy and delicious recipe using yeast to produce light and fluffy donuts rolled in cinnamon sugar.

RECIPE CREDIT
This recipe is adapted from Gary Mehigan of MasterChef Australia.

This recipe was first published on 5 August 2011. It has been updated with new photos and more comprehensive recipe notes.