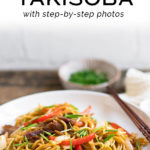 During my early years as a young professional, my girlfriends and I often met for dinner after work at a cheap and cheerful Japanese restaurant, and this was when I was introduced to Yakisoba. Up until that point, my knowledge of Japanese cuisine had been limited to sushi rolls, so I was excited to discover a whole new world of Japanese savoury dishes.

Yakisoba is a delicious Japanese noodle stir-fry dish with a distinct taste which makes it quite unique when compared to the more well-known Chinese or Thai noodle stir-fries.

Although “soba noodles” are made from buckwheat, the noodles used in Yakisoba are actually wheat-based.

You can find pre-cooked yakisoba noodles sold in vacuum-sealed packets in most supermarkets or Asian grocers.

Yakisoba noodles have a long shelf-life, so they are perfect for keeping on hand in the pantry. Once you see how easy it is to make Yakisoba, you will know why I always keep multiple packets of yakisoba noodles on hand at home!

If you can’t find yakisoba noodles, udon noodles would also work really nicely in this recipe, or any Chinese-style egg noodles.

The most common version of Yakisoba is stir-fried noodles with pork, shredded carrots and cabbage. But like for most stir-fries, you can use whatever protein you like, and whatever vegetables you like.

In fact, what I love about this Yakisoba recipe is that I can turn a fridge-raid into a delicious meal. I always have carrots, cabbage and capsicums (bell peppers) in the fridge, but sometimes I will use vegetables more common in Chinese cuisine, such as bok choy and shitake mushrooms.

What is unique about Yakisoba is the sauce. The versions that I have made over the years have always included Worcestershire sauce and tomato ketchup – two ingredients which give the sauce a characteristic savouriness and sweetness.

How to Make Yakisoba

Place the yakisoba noodles into a large bowl and cover with boiling water. Use a pair of chopsticks or tongs to gently shake and separate the noodles. Drain the noodles and set them aside.

Remove the rind from the pork belly and thinly slice the meat. Generously season the pork with salt and pepper.

Heat the oil in a large wok or non-stick frying pan. Cook the pork belly in batches until the meat is golden and caramelised.

Use a slotted spoon to remove the meat to a large plate and set aside.

What you will have left in the pan is some deliciously rendered pork belly fat which will add a lot of flavour to the dish. If you have more than about 3 tablespoons of fat in the pan after you have finished cooking the pork, remove the excess oil.

Add the onion and garlic to the pan, and cook for a few minutes until they are aromatic.

Then add the chopped vegetables, and cook for a few minutes until the vegetables just start to soften.

Return the pork to the pan, together with the noodles and the yakisoba sauce.

Stir everything together and cook until the noodles have warmed through and they have soaked up all of the sauce.

Garnish with spring onions (scallions) or chives just before serving.

How to Serve Yakisoba

Most Japanese restaurants serve Yakisoba with a garnish of pickled ginger, and I also like to have a generous sprinkle of chilli flakes or Togarashi on mine.

I must admit that the first time I tried Yakisoba, I had actually ordered Omusoba, which consists of a portion of Yakisoba wrapped in a light omelette, and drizzled with Japanese Kewpie mayonnaise and Tonkatsu sauce. It is like the Japanese equivalent of a burrito and so so delicious! 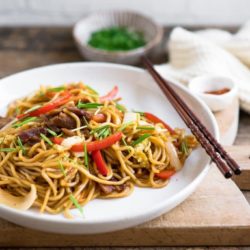 For the Yakisoba Sauce

For the Stir-Fried Noodles

VARIATIONS FOR VEGETABLES
You can use almost any vegetable in this recipe. Other suggestions include:
* bok choy, roughly chopped
* green capsicums (bell peppers), thinly sliced
* shitake mushrooms, thickly sliced

VARIATIONS FOR MEAT
You can substitute the pork belly for thinly sliced chicken breast or chicken thigh.

MAKE IT VEGETARIAN
You can make this dish vegetarian by omitting the pork belly and replacing it with thick slices of firm tofu, or just use vegetables.