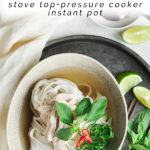 A fragrant and soul-soothing Beef Pho Noodle Soup is often what I crave when only a steaming bowl of noodle soup will do. But when time is sparse and I don’t have 3 hours to potter about in the kitchen, a Chicken Pho is a rather wonderful alternative.

For that reason, this Chicken Pho recipe (called Pho Ga in Vietnamese) is a handy one to have in your repertoire.

What is Chicken Pho?

According to Tracey Lister and Andreas Pohl in their delightful cookbook on Vietnamese cuisine, Real Vietnamese Cooking, Chicken Pho was invented during the Japanese occupation of Vietnam in the 1940s when beef was in short supply.

The broth is lighter and sweeter, but with a familiar nod to the traditional beef version, thanks to the use of the same fresh herbs and spices.

I make chicken soup at home quite frequently; it’s almost my default menu when I don’t have a lot of time to cook because I can just let the chicken simmer gently on the stove while I’m tending to something else. At other times, I simply stick the chicken in the oven to roast.

But if you are in the habit of frequently making your own chicken soup or stock, turning it into a Chicken Pho soup is a nice way of varying the menu a little. While it’s hard to beat a chicken noodle soup in any form, I’m rather impartial to a chicken pho soup.

How to Make Chicken Pho

Chicken Pho uses similar spices and aromatics as a Beef Pho. But unlike a beef pho broth recipe which uses beef bones and oxtails, a Chicken Pho is much quicker to cook because it takes much less time for the chicken to work its magic on the broth.

To make the Chicken Pho broth, place a whole chicken (preferably organic) into a large pot, and fill it with cold water until it barely covers the chicken.

When making soups and stocks, I like to use a tall and narrow pot so that the chicken sits snugly inside.

The secret to making a flavourful broth is to start with only enough water to cover the ingredients in the pot. This is likely to produce a broth with a concentrated flavour, but you can dilute it later with more water until you have the right balance. If you start with too much water, you might create a broth which is too diluted in flavour.

While the chicken is simmering, chargrill the onions and ginger on a grill pan or over an open flame.

You can chargrill the onions unpeeled; the skins will give the broth a lovely, rich colour. However, I prefer to peel my onions to get more “chargrilled” flavour. Also, I find that most onions have a lot of dirt under the skins, so I find it better to peel them first.

Once the water has come to a simmer, add the chargrilled onions and ginger to the pot, together with the cinnamon and star anise.

Allow everything to simmer together for about 1 to 1.5 hours, or until the chicken is tender and the meat falls away easily from the bones. The duration of cooking depends on the the size of your chicken.

During this time, skim off any impurities which come to the surface.

I also like to maintain the same water level throughout the cooking, so I recommend topping up with boiling water when necessary.

Carefully remove the chicken to a large bowl or plate, and let it cool for a few minutes before using your hands or two forks to shred the meat.

Strain the broth through a fine sieve into another large pot. Add the sugar, salt and fish sauce, and taste for seasoning.

If the broth is too concentrated, add some boiling water until you have the right balance.

Let the broth simmer gently for about 10 minutes before serving as per the recipe.

Most Chicken Pho recipes take at least an hour for the broth to be ready.

But if you own an Instant Pot or pressure cooker, making Instant Pot Chicken Pho is super quick! You can have dinner on the table in about 30 minutes, which is pretty impressive for a mid-week dinner.

In fact, I love that the broth can be ready in the time it takes me to cook the noodles and prepare the garnishes. Also, the chicken becomes incredibly tender and succulent, and you know that the broth is just full of golden goodness.

Once you have tried making Chicken Pho in the Instant Pot or pressure cooker, it is hard to go back!

The only “drawback” to making Chicken Pho in an Instant Pot or pressure cooker is that the broth will be a bit cloudy compared to one made on the stovetop. But the taste should still be just as delicious.

When making any Asian dish, I always like to make a trip to my local Asian grocer. Not only is the produce often cheaper than the main supermarkets, but the brands they stock are often better quality.

I like to use Squid brand fish sauce in my cooking. I find it to be a fairly mild fish sauce which is not too pungent. It’s also what my mother always cooked with when I grew up, so I just use what she does!

Fresh pho noodles are always best, if you can get your hands on some. Otherwise, there is nothing wrong with dried pho noodles. These days, even my local supermarket (in Switzerland!) stocks dried flat noodles which I think is a handy alternative when there is an unexpected craving for pho.

Pho noodles come in varying sizes and my preference are for the wider noodles. Whatever size you buy, just make sure they are the flat rice noodles (not round).

The classic sauce accompaniments to pho always include hoisin sauce and Sriracha sauce.

In my family, we never added these directly to the broth; it was always served on the side to dip the meat into. But I’ve seen friends mix the sauce directly into their soup – do as you please! 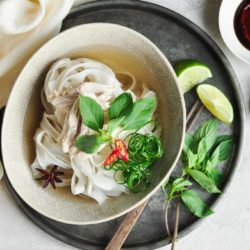 You will need roughly 200 g (7 oz) of fresh rice noodles per person, but use more or less as you wish.

If you cannot find fresh rice noodles, you can also use dried rice noodles and rehydrate them as per the packet instructions. Make sure they are the flat noodles (not round).

To ensure that you have a flavourful broth, use a pot which will comfortably fit the chicken and pour in enough water so that it is only just covering the chicken.

If you later find that the broth is too concentrated, simply dilute with some water. Usually, my method creates a fairly concentrated broth, but it is much easier to dilute a strong broth than to add flavour to a weak broth.

This recipe was first published on 13 May 2014. It has been updated with new photos and more comprehensive recipe instructions.