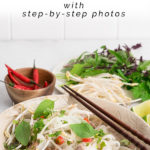 Pho could perhaps be described as the national dish of Vietnam. But what many people don’t know is that Pho is predominantly a breakfast dish in Vietnam.

In some parts of the world, breakfast might be a bowl of cold cereal to some. In Vietnam, however, they like to kick-start their day with an aromatic noodle broth, full of flavour and texture to awaken the senses.

Making your own Vietnamese pho at home might sound complicated, especially if you have a cheap and cheerful Vietnamese joint in your neighbourhood.

But this is the sort of dish to make on a rainy day when you can potter about in the kitchen, resulting in a nourishing and healthy meal which you can enjoy over several days.

How to Pronounce Pho

Pronounced “fuh” or “fur” (not “foe”), the name and inspiration for this dish is thought to have its origins from the French pot-au-feu.

On one of my trips to Vietnam as a small child to visit my maternal grandmother, I would go into town with my uncle in the early hours of the morning to seek out a little pho stand where we would grab some takeaway for breakfast.

Perched on the back of my uncle’s motorcycle, I would watch the pho lady quickly assemble our order, placing steaming hot noodles with meat into one plastic bag, and sealing the pho broth in another plastic bag (much like transporting a newly-acquired goldfish).

It is believed that, during the French occupation of Vietnam, the French consumed large quantities of beef in their diet and the resourceful Vietnamese cooks used the scraps and bones from the slaughtered cattle to create a local version of the French meaty stew.

The recipe for Pho is believed to have originated in the north of Vietnam where, like many dishes from the north, it is simple and uncomplicated; a pho bac is often simply noodles, broth, slices of beef and minimal garnish.

In the south of Vietnam, however, their pho broth is more like their people – a bit fancier and more show-offy. They like their bowls to be more generously sized with more texture added to the dish, such as with the inclusion of beef meatballs and tripe, and pimped with bold flavours courtesy of a selection of fresh herbs and chillies.

How to Make Pho

Place the oxtail and beef brisket (or beef short ribs) into a large pot, and cover with cold water.

Bring the pot to a boil, and let it boil rapidly for 5 minutes.

By this stage, a lot of the gunk and impurities from the meat will have risen to the surface. This is actually why this first step is important – you don’t want these impurities in your soup broth.

Remove the meat and bones to a large colander, and discard the water from the pot.

Rinse the meat and bones, and place them into a large, clean stockpot which you will use to make the pho broth. For the recipe below, I use a stockpot with a 15 litre (16 quart) capacity, but you can use one slightly smaller.

Cover the meat and bones with cold water, and bring the pot to a gentle boil, before reducing to low-medium heat.

The broth should not be rapidly boiling, otherwise the broth will go cloudy – you want just a gentle simmer to achieve a nice, clear broth.

Add the cloves, star anise and cinnamon sticks to the broth, as well as the chargrilled onions and ginger (see Step 3 below).

Simmer gently for about 2 hours, before seasoning the broth.

Simmer for a further 1 hour, or until the meat is very tender.

Check the broth regularly to skim off any impurities from the surface, and to top up the water, if necessary. I like to ensure that the water level remains consistent throughout cooking.

While you are waiting for the broth to come to a simmer in Step 2, chargrill the onions and ginger until lightly scorched.

I use a grill pan on the stove, but you can also use an open flame if you have a gas stove, or you can grill (broil) the onions and ginger in the oven.

How to Eat Pho

Like many noodle soup dishes in Vietnam, the final flavouring of the pho broth is always up to the eater. Any serious establishment serving Beef Pho will always offer a plate of garnish alongside, generously piled with fresh coriander (cilantro), spring onions (scallions), Thai basil, bean sprouts, chillies and lemon or lime wedges.

Sauce accompaniments typically include hoisin sauce and Sriracha sauce for dipping your meat into, although I know many who also add these sauces to their broth, along with fish sauce to taste and sometimes even freshly ground black pepper.

Personally, I wouldn’t add any sauces to the pho broth directly because, after the many hours of simmering on the stove, the broth should already be rich and full of flavour.

But at the end of the day, how much or how little you want in your bowl of pho is up to you.

If you are looking for more Vietnamese recipes, you might also enjoy: 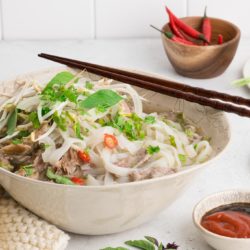 A classic and authentic recipe for Vietnamese Pho Noodle Soup. This beef pho recipe uses oxtail and beef brisket for a delicious and full-flavoured pho broth. Recipe with step-by-step photos.

To make the broth

PHO NOODLES
Pho is traditionally served with flat rice noodles. They come in various widths, and the size used depends on personal preference. Thin flat rice noodles are perhaps more common in restaurants, but I personally prefer the wider noodles (about 1 cm width) because they have a softer, silkier texture when cooked.

HOW TO COOK RICE NOODLES
The instructions will vary from brand to brand, but I generally soak my dried rice noodles first in a large bowl of cold water for about 30 minutes. Bring a large pot of water to the boil. Using a noodle strainer or large slotted spoon, cook one portion of noodles at a time in the boiling water. The timing will vary depending on the type of noodles that you have used, but anywhere between 30 to 60 seconds should be sufficient. The noodles should be soft but still have a bit of bite. Strain the noodles and place them in the serving bowl. The noodles will continue to cook once you pour over the soup broth.

HOW MUCH BROTH PER PERSON
For a generous serving, I like to give each person approximately 600 ml (about 2½ cups or 3 large ladles) of broth. This should give the cook an idea of how many noodles per serving, keeping in mind that the noodles will absorb some of the broth once added, and you want enough broth in the bowl for some slurping action.

HOW MUCH MEAT PER PERSON
How much meat you add is also a personal choice. I often find that the oxtail and beef brisket used to create the broth is more than we would eat over 6 to 8 servings. In fact, a lot of recipes for pho often don’t tell you what to do with the oxtail; it is a lovely and flavourful piece of meat which should be enjoyed after you have tended to it for so many hours. The oxtail happens to be my daughter’s favourite part of this recipe! You can serve the oxtail as is alongside or in the soup bowls, or – for a more elegant option – you can remove the meat from the oxtail and discard the bones before serving.

HOW TO MAKE PHO TAI
Vietnamese Pho is commonly served with slices of thinly sliced fresh beef. You will need about 400 g (14 oz) beef filet or eye filet (for 6 to 8 servings). To help you achieve paper-thin slices, place the piece of meat in the freezer for about 30 minutes before slicing. Slice the beef very thinly and place 4-5 slices on top of the noodles. As you pour the hot broth over the beef, the meat will start cook. The slices of beef will continue to cook in the hot broth in the bowl.

MAKE IT WITH BEEF BONES
My mother always made pho with oxtail, which I think gives the broth a unique sweetness and flavour which you can’t achieve with regular beef bones. However, you could still substitute the oxtail for the same quantity of beef bones, or use a mixture of both oxtail and beef bones. I like to use to mixture of oxtail and beef short ribs; the bones in the short ribs add additional flavour to the broth, and if you choose meaty short ribs, you can serve the meat with the soup later. When choosing oxtail, I prefer to use small to medium pieces, especially if you plan to serve them as part of the meal.

MAKE IT WITH MORE VEGETABLES
For a non-traditional, yet a frequent variation of this recipe in my home, I like to add vegetables to the finished broth, such as:
* carrots, thinly sliced
* bok choy or pak choy, sliced if large
* broccoli, cut into small florets
* baby corn, sliced

SEASONING THE BROTH
This is perhaps the trickiest part of the recipe if you are a novice cook. Knowing how to balance the flavours in a recipe takes practice, and how you like your broth will be different to how others like it. If you cooked your broth at a slightly higher temperature than I did for 3 hours, more water would evaporate during cooking, and your broth might turn out more concentrated, thus requiring some diluting with water at the end. Similarly, different brands of fish sauce vary in saltiness. But if you have followed the above recipe to the letter and you think the broth is still missing something, don’t be afraid to add a dash of MSG or crumble in a beef stock cube. Vietnamese home cooks do this all of the time!

HOW TO STORE THE PHO BROTH
The broth keeps well in the fridge for several days and will turn jelly-like once cold. If you have made a large batch, you can freeze the broth in freezer bags.

FOOD STORAGE
All of the components of this dish should be kept separately in the fridge.

This recipe was originally published on 27 February 2014. It has been updated with new photos and more comprehensive recipe notes.