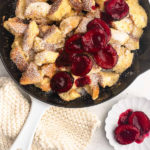 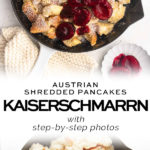 A warm and cosy Austrian dessert comprising of thick, fluffy pancakes which are shredded and served with a tart plum compote. A delicious Kaiserschmarrn recipe with step-by-step photos.

I often think the best part of skiing is the food. It’s the only part of the ski routine that is familiar to me, and the only time during the ski outing that I get to warm up (hint: I don’t ski fast enough to break a sweat!).

Quite often when I am trying to negotiate a steep, icy slope, the only thing that will see me through to the finish line is the thought of a hot meal at the end of that run. Whether it’s a steaming bowl of Pearl Barley Soup, a hearty Raclette or Cheese Fondue, my favourite Swiss Mac & Cheese or a classic Chicken Schnitzel, I look forward to all of the alpine dishes.

And whenever we are skiing in Austria, I definitely always look forward to the Kaiserschmarrn.

Kaiserschmarrn is the name of an Austrian dish consisting of a thick and fluffy pancake which is shredded into bite-sized pieces, dusted with icing sugar (powdered sugar) and traditionally served with a plum compote.

As it is a warm dish, Kaiserschmarrn is typically served in winter. In fact, you will find Kaiserschmarrn on many menus in alpine restaurants, listed not as a dessert but actually as a light meal in itself.

I came across this delightful discovery many years ago after a morning skiing (regrettably) with some faced-paced Austrian friends in Kitzbühel, Austria. They told me of a hut tucked away in the forest serving just Kaiserschmarrn, except one had to ski down several tricky slopes and navigate numerous dreaded T-bar lifts to arrive at this mirage. I’m not sure how I finished that ski obstacle course, but I was very happy to eat pancakes for lunch for the first time in my adult life.

Where to Eat Kaiserschmarrn

As Kaiserschmarrn originates from Austria, you can find it on many restaurant menus in Austria, especially in the mountains, and more commonly in the colder months.

Kaiserschmarrn can also sometimes be found on menus in restaurants in the German-speaking part of Switzerland, as well as in Germany.

The Kaiserschmarrn stand is also a very popular feature at Swiss Christmas Markets, and it happens to be the perfect pairing with a mug of Glühwein.

This Kaiserschmarrn recipe is a favourite with my kids. They devour all types of pancakes, but they especially love Kaiserschmarrn because it is already cut up for them!

My recipe for Kaiserschmarrn produces a thick and fluffy pancake which has a soufflé-like texture, which makes them very more-ish and perfect for soaking up the plum compote.

However, like any recipe, many variations exist. Some people like Kaiserschmarrn with thinner pancakes, some pancakes are more dense or more eggy, some Kaiserschmarrn recipes include a drizzle of melted butter at the end for extra richness, and some include rum-soaked raisins in the batter.

The majority of Kaiserschmarrn dishes I have eaten in restaurants have pancakes which, in my opinion, don’t really resemble pancakes. Quite often, the “pancake” component is quite dense and eggy, sometimes a bit oily from the butter.

But the one time I ate Kaiserschmarrn which had been made freshly with thick and fluffy pieces of pancake, I realised that there were many variations to this recipe, and that I had just met my favourite version.

For me, I like my pancakes light and fluffy, so I like to eat Kaiserschmarrn with a similar texture.

Cooking Kaiserschmarrn in the Oven

Having tried many Kaiserschmarrn recipes over the years, I have learnt that there are two ways of making this dish: either on the stove or in the oven.

I prefer to make Kaiserschmarrn in the oven. Why?

Cooking Kaiserschmarrn on the Stove

Many people prefer to cook Kaiserschmarrn on the stove, which is totally acceptable as well. However, I actually find cooking the pancake on the stove more difficult. Why?

How to Make Kaiserschmarrn

Place the dry ingredients into a large mixing bowl.

Measure the milk into a measuring jug, and add the egg yolks and vanilla.

Whisk the milk mixture into the bowl of dry ingredients. Keep mixing until you have a smooth batter.

In a separate clean bowl, whisk the egg whites until stiff peaks form.

Fold the whisked egg whites carefully into the batter, about one-third at a time. Take care not to deflate the egg whites while doing this step.

Melt the butter in a non-stick pan over medium heat. I use a cast-iron pan which measures 26 cm/10 inches across the top.

Pour all of the batter into the pan. As you are making one large pancake, the batter should completely fill the pan, but there should still be room for the pancake to rise a little.

Cook the pancake over medium heat for a few minutes, or until the edges around the pancake just start to set.

Transfer the pan to the oven and bake for about 15 minutes, or until the pancake has puffed slightly and is lightly golden all over.

I also recommend placing the pan on an oven rack and NOT a metal oven tray because the latter might make cause the bottom of the pancake to brown too much upon baking. But much depends on the type of pan that you use.

After 15 minutes, the pancake should be fully cooked through. If you give the pan a gentle shake and the centre of the cake wobbles, bake it for a few more minutes.

Now it is time to shred the pancake. I find it easiest to do this by transferring the pancake to a large plate, and using a knife and fork to cut the pancake into bite-sized pieces.

However, it is more traditional to shred the pancake directly in the pan. If you decide to do it this way, I recommend using two wooden spatulas, or a utensil which will not damage the surface of your pans.

Placed all of the shredded pancake pieces back into the pan. Sprinkle generously with granulated sugar, which will add sweetness and a bit of crunch to the dish.

How to Serve Kaiserschmarrn

Kaiserschmarrn can be served either as a light meal or as a dessert.

In restaurants, it is often served with a bowl of plum compote or apple compote on the side. The compote serves as a sweet topping to the pancakes, in the same way that you would add maple syrup to pancakes. Hence, the compote should be thin enough to create a sauce for the pancakes.

Some other alpine recipes which you might enjoy include: 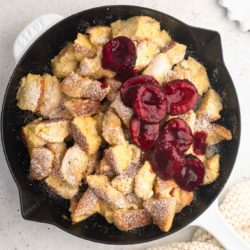 A warm and cosy Austrian dessert comprising of thick, fluffy pancakes which are shredded and served with a tart plum compote. A delicious Kaiserschmarrn recipe with step-by-step photos.

For the Plum Compote

For the Plum Compote

VARIATIONS
Many Kaiserschmarrn recipes contain raisins in the batter, which are typically soaked in rum. Place 100 g (2/3 cup) raisins and 60 ml (1/4 cup) rum into a small saucepan and bring to the boil. Then set aside for about 15 minutes for the raisins to plump up. Scatter the raisins over the pancake just before placing the pan into the oven.

SERVING SUGGESTIONS
It is traditional to serve Kaiserschmarrn with a plum compote (as per this recipe), but some restaurants also serve them with apple compote (applesauce), which is a favourite with my kids. As Kaiserschmarrn is essentially a very large pancake, my kids also love it served with warm maple syrup.