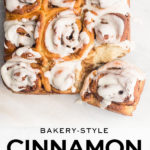 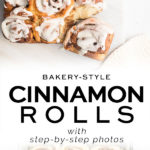 Soft and fluffy Cinnamon Rolls made from a brioche-like dough, and drizzled with a simple icing for a touch of indulgence. Easy recipe for Cinnamon Rolls with step-by-step photos.

As a child, I loved anything which was slathered in icing. And it was a good thing that my parents ran a bakery because there was no shortage of cakes and buns generously decorated with a frosting of some sort. Iced Finger Buns remain a firm favourite from my childhood, but something I was only introduced to as an adult are Cinnamon Rolls.

Living and working in the US was one of the most enjoyable periods in my former life as a lawyer. And I’m still so thankful to my American colleagues who were always eager to introduce me to their favourite local cafés, restaurants and drive-thru.

I fondly recall a breakfast meeting at a nearby food court over a plate of Cinnamon Rolls at Cinnabon. They were sticky and messy, probably a bit too sweet to classify as breakfast, but they were a great distraction from the actual work we had to discuss!

If you are a seasoned bread baker, Cinnamon Rolls are very easy to make; it’s a bit like making a brioche with a few extra (but easy) steps added to make the scrolls. But even if you are new to bread baking, my Cinnamon Rolls recipe with step-by-step photos will help you to make these delicious treats with easy-to-follow instructions.

What are Cinnamon Rolls?

Cinnamon Rolls are very much an American treat, albeit with a slight nod to Scandinavia.

Sweden is famous (culinarily speaking) for its Cinnamon Buns (or Kanelbullar), which are yeasted buns, heavily spiced with cinnamon.

The American-style Cinnamon Rolls are quite similar, but I find them to be much more lightly spiced, much softer in texture, and much sweeter thanks to the addition of a generous glaze or even a cream cheese frosting.

Having travelled many times to both Sweden and the US, and having sampled many cinnamon rolls in both countries, I find it a tough call to decide which I like more … There is a time and place for both 😉

My recipe for Cinnamon Rolls uses my favourite and trusty recipe for enriched dough, i.e. a yeasted dough which has been enriched with eggs, milk and butter. It is almost the same dough which I use for Finger Buns and Cream Buns, but with the addition of an egg for extra richness and colour.

The resulting dough has a very similar taste and texture to a brioche.

Here, the brioche-like dough is rolled out thinly, spread with a mixture of butter, cinnamon and sugar, and then rolled up to form coils (or snails).

You could stop there if you prefer to keep things minimalist and Swedish. Or you add a simple glaze to turn these Cinnamon Rolls into a scrumptious tea-time treat.

How to Make Cinnamon Rolls

Measure the flour, sugar, yeast and salt into the bowl of an electric stand mixer. Lightly mix the ingredients together.

Add the egg to the bowl. Slowly add the warm milk (you may not need all of it), and lightly beat everything with the dough hook until it comes together into a large ball of dough. Only add as much milk as you need to bring the ingredients together into a dough.

Slowly incorporate the butter, one tablespoon at a time, until all of the butter has been used.

Then increase the speed to medium and continue kneading with the dough hook for 15 to 20 minutes, or until the dough is smooth and elastic.

Lightly oil a large mixing bowl, and place the dough into the bowl. Cover the bowl with a clean tea towel and leave it somewhere warm for 1 to 1.5 hours, or until the dough has doubled in size.

Once the dough has doubled in size, punch it back and knead it gently into a smooth ball.

Roll up the dough tightly from the short end.

Cut the dough into 9 even pieces using a very sharp knife and by using a sawing motion to keep the layers nicely separated. Clean the knife between each slice.

If you plan to make these Cinnamon Rolls the night before, stop here, cover the pan with some plastic wrap, and leave the pan overnight in the fridge.

Otherwise, place the pan somewhere warm for about 30 minutes, or until the buns have risen and puffed up slightly.

Preheat the oven to 200°C/390°F with a metal baking tray on the middle shelf. Bake the buns for 10 minutes.

Reduce the heat to 180°C/356°F and bake for another 20 minutes, or until the buns are lightly golden. Check the buns at about 10 minutes, and if they are browning too quickly, cover them with a loose sheet of foil for the rest of the baking time. The buns are cooked if an internal thermometer reads 85°C (185°F).

Gently remove the buns (intact) to a wire rack, and leave them to cool completely.

Make the icing by whisking together the ingredients until you have a thick, but runny, consistency.

Generously drizzle the icing over the buns, as much or as little as you like.

Cinnamon Rolls are best eaten on the day they are baked, but if you are planning to bake and serve them in the morning, such as for breakfast or brunch, there are two ways to make Cinnamon Rolls ahead of time.

Method 1 – Getting a Head Start

Make the dough as per the recipe and leave it to double in size. Once the dough has doubled in size, without deflating the dough, cover the bowl and place it in the fridge where it will continue to rise very slowly overnight. The next day, proceed with the rest of the recipe.

Advantages: The dough will be cold and easier to work with.

Follow the recipe until you have arranged the pieces of sliced dough into the baking pan. Cover the pan with plastic wrap and place it in the fridge where it will continue to rise very slowly overnight. The next day, take the pan out of the fridge and let it come to room temperature before baking as per the recipe.

Advantages: Most of the work will have been done the night before. You just simply need to let the buns come to room temperature, during which time you can preheat the oven. 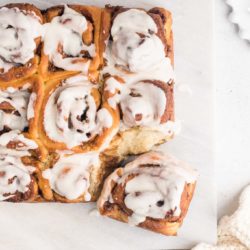 Soft and fluffy Cinnamon Rolls made from a brioche-like dough, and drizzled with a simple icing for a touch of indulgence. Easy recipe for Cinnamon Rolls with step-by-step photos.

For the Cinnamon-Sugar Filling

(You will need approx. 3 hours to make the Cinnamon Rolls)

For the Cinnamon-Sugar Filling

To Shape the Cinnamon Rolls

To Bake the Cinnamon Rolls

To Ice the Cinnamon Rolls

MAKE AHEAD TIPS
To make the Cinnamon Rolls the night before:
* Make the dough as per the recipe until it has doubled in size. Without deflating the dough, place it in the fridge to continue proving overnight. The next day, proceed with the rest of the recipe.
* Alternatively, complete all of the steps until you have assembled the 9 pieces of rolled dough in the baking pan. Cover the pan with some plastic wrap, and leave in the fridge to prove overnight. The buns will rise and puff up overnight in the fridge. Before you are ready to bake, take the pan out of the fridge and let the dough come back to room temperature (this should take about 30 minutes). Proceed with the rest of the recipe.

BAKE IN A ROUND DISH
To bake the Cinnamon Rolls in a 25cm/10 inch round baking dish or cake pan, cut 8 slices from the dough.

DIFFERENT TYPES OF FLOUR
* For Swiss readers: I use Zopfmehl (or farine pour tresse) when making bread and enriched dough.

DIFFERENT TYPES OF YEAST
* Please note that there is a difference between instant yeast (also called instant dried yeast or fast-action dried yeast) and dried yeast (also called active dry yeast). If you are not sure what type of yeast you have, please check the packaging for instructions on how to use the yeast.
* With instant yeast, you can add it directly to the flour mixture without having to activate it first.
* With dried yeast, you will need to activate it first (usually in some warm liquid).
* If you are using fresh yeast, you will need about half a block (40 g fresh yeast = 14 g instant dried yeast). Crumble the fresh yeast into the warm milk, and stir to dissolve the yeast.

PROOFING THE DOUGH
Dough needs a warm environment for the yeast to activate and cause the dough to rise. If you don’t have a warm place in your home, try one of the following ideas:
* In the oven with the oven light switched on (works only for some ovens).
* In the oven with a tray of boiling water on the bottom shelf.
* In the oven or a steamer oven at a low temperature of about 25-40°C (77-104°F).