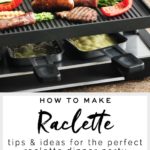 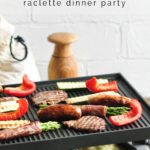 How to make and serve raclette, a traditional Swiss dish, at home with a raclette grill. Tips on what kind of cheese to use, and what to serve with raclette.

The word raclette is both the name of a type of Swiss cheese and the name of the dish itself.

As soon as the nights start to become a bit chilly, the Swiss can be seen tucking into a bubbling pot of Cheese Fondue or sharing a raclette dinner with friends. Raclette is always a fun option for entertaining, primarily because nearly everybody loves cheese (if you live in Switzerland, eating cheese is almost obligatory), and it hardly takes any effort to prepare.

In fact, after a long hike in the winter snow or a day spent skiing on the slopes, Raclette is perhaps one of the easiest meals to put together because, aside from boiling some potatoes, everything else can be picked up from the supermarket on your way home.

What is Raclette Cheese?

Raclette cheese is traditionally made from cow’s milk, although you can also find some varieties made from sheep’s milk.

Raclette cheese is a semi-hard cheese which is thickly sliced (less than 1 cm) and used for melting and grilling; it is not intended to be eaten raw. The mild varieties have a characteristic pungency, so it is definitely a dish for cheese-lovers only.

These days, supermarkets and cheesemongers stock a wide selection of raclette cheese, from the classic mild variety, to those flavoured with peppercorns, chillies, or garlic. My favourite are the smoked raclette cheese and the blue cheese variety.

How to Use a Raclette Grill

At home, a raclette meal is served using a table-top grill, like one pictured in these photos. The cheese is melted in small pans called coupelles, which are placed under the heating element. The grill plate is used to cook meat and vegetables, although we have eaten with friends who don’t use the grill plate at all.

And this is partly the reason why I love raclette so much – you can customise the meal to your liking and serve the melted raclette cheese with whatever you like. Haven eaten raclette in the homes of many Swiss friends, I have taken a few ideas here and there to make the dish my own.

How to Serve Raclette

Raclette is a really fun meal to share with friends and family, and what I love is that it is a stress-free dinner! There is no cooking in advance – except to boil some potatoes – and the preparation is limited to chopping up a few vegetables and plating up the cheese.

For a raclette dinner, you will need about 200g (7 oz) raclette cheese per person. I always buy an extra portion in case someone has a hearty appetite that night!

I also like to buy a selection of different raclette cheese to keep the flavours interesting but, as a general rule, at least half of the assortment should be mild raclette cheese.

In my family, we like to cook lots of vegetables on the raclette grill. Cheese and potatoes on its own can be quite heavy and filling, and I think the addition of grilled vegetables make it more of a complete meal.

These days, we also like to cook sausages for the children, and sometimes I will buy a nice piece of beef fillet if we have guests joining us.

If you don’t want to cook meat on the grill, it is also traditional to serve a plate of cold charcuterie (salami, ham, dry-cured meat, etc) as an accompaniment.

The melted raclette cheese is usually served over boiled potatoes, with cornichons and pickled onions on the side. But I have many Swiss friends who like to pour their cheese over their grilled vegetables and pickles; some even chop up their potatoes and place these directly in the coupelles so that the cheese can melt directly on top!

Please see my recipe below for more ideas.

And don’t think you need to eat raclette with a lot of people; I have always wanted a mini raclette grill for two – they just look so cute!

If you are looking for more Swiss recipes, you might enjoy: 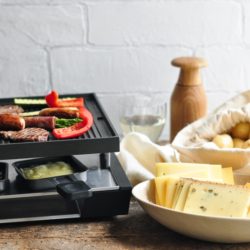 How to Make Raclette

How to make raclette, a traditional Swiss dish, at home with a raclette grill.

It is entirely up to you what meat and vegetables you wish to serve with raclette.

You could even make the meal vegetarian by grilling only vegetables, or even not using the grill plate and simply making a salad to go alongside.

Instead of grilling meat and sausages, it is also traditional to serve a plate of charcuterie or cold cuts, such as salami, ham and other deli meats.

I like to add half a teaspoon of brined green peppercorns to plain raclette cheese before grilling it. This gives the cheese a spicy kick and saves me from having to buy too many different types of raclette cheese.

Any leftover raclette cheese is wonderful for toasting on bread with ham under the grill. Yum!

You can buy special potato prongs to hold the hot potatoes so you can peel them easily at the table. However, I prefer to use new potatoes and to eat them with the skin on.

Depending on what is in season, I also like to make the following to cook on the grill plate:
* asparagus wrapped in prosciutto or thinly sliced bacon
* mushrooms stuffed with cream cheese (I like Cantadou)
* thick slices of fresh pineapple