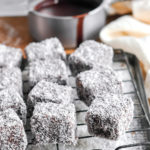 A delicious recipe for Lamingtons using real chocolate, perfect to serve on Australia Day or for a school bake sale.

Lamingtons have an iconic status in Australia and, although they are traditionally made on Australia Day, they are also enjoyed throughout the year.

Lamingtons are quite popular at bake sales, and anyone growing up in Australia will know of the lamington drives, a fundraising event (usually in schools) where lamingtons would be sold by the half dozen to raise money for charity.

What is a Lamington?

A lamington is traditionally made from a vanilla sponge cake, coated in a chocolate sauce and then rolled in dessicated coconut.

They are often found in local bakeries and supermarkets in Australia, though local coffee shops are increasingly serving these little cakes as a posh, yet nostalgic, bite.

When we were in Australia last year, we treated ourselves to dinner one evening at Rockpool Bar & Grill in Melbourne, and I was delighted to find that they had lamingtons on the dessert menu, served as petit fours with a white chocolate chantilly and strawberry jam. Naturally, I couldn’t resist ordering this for dessert!

Over the years, I have played around with several lamington recipes. Some have produced really eggy sponges, others have been too heavy for my liking.

So I have eventually arrived at my own concoction, which has been a hit with my family and friends for many years now.

This lamington recipe produces a light, yet firm, vanilla sponge which goes perfectly with the rich chocolate icing. Most traditional recipes use a chocolate sauce which is used to lightly coat the sponge and provide a wet surface for the coconut to adhere to.

My recipe uses real chocolate in the icing which later sets to give the lamingtons a thicker coating than normal, which is not only totally delicious, but it also helps the lamingtons to keep better for longer.

How to Make Lamingtons

To make lamingtons, you need to start with the sponge cake.

The sponge cake needs to be both light and fluffy, but it also needs a bit of structure so that it can hold its shape once it is rolled in the chocolate icing and coconut.

If the cake is too soft and crumbly, it will be difficult to work with and it may also absorb too much icing.

I like to make the sponge cake the night before, so that the cake has had a chance to cool down completely and also dry out slightly, making it easier to work with the next day.

But if you don’t have time to make the cake a day ahead, simply cut the cake into squares once it has cooled, and then freeze the cakes for about 1 hour before proceeding with the rest of the recipe.

How to Serve Lamingtons

And whilst lamingtons are traditionally served in small sizes, it is not uncommon to see them in a large cake form. I recall having many birthday parties as a child where my mother had made a lamington cake to celebrate.

How Long Can You Keep Lamingtons?

I find that lamingtons made using this recipe keep very well because the icing helps to keep the sponge inside moist. Because there is real chocolate in the icing, the coating of the lamington will harden a little, a bit like icing on a cake, but it is still really delicious.

I keep them on a cake stand covered with a glass lid for up to one week, though you would be lucky to still have any leftover after this time!

If you are looking for Australian recipes, you might also enjoy the following:

Pavlova with Cream and Passionfruit 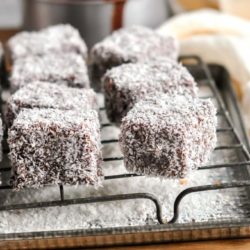 A delicious recipe for Lamingtons using real chocolate, perfect to serve on Australia Day or for a school bake sale.

For the chocolate icing

(Ideally, make the cake the night before or see my Kitchen Notes below if you want to make everything on the same day)

For the chocolate icing

MAKE AHEAD TIPS
I prefer to make the sponge cake the night before serving, and to leave the cake to cool and dry on the wire rack overnight. By letting the cake dry out overnight, the cake will be easier to handle and less crumbly when dipping it into the chocolate.

FREEZING TIPS
If you don’t have time to make the cake a day ahead, I recommend cutting the cake into squares once it has cooled, and to then freeze the cake for about an hour before proceeding with the rest of the recipe.

STORAGE TIPS
These lamingtons keep very well for several days in an airtight container or on a cake stand with a glass lid.

This post was first published on 26 January 2012. It has been updated with new photos and more comprehensive recipe notes.