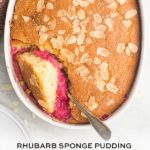 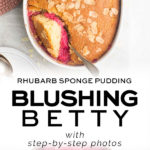 A Blushing Betty is a rhubarb sponge pudding with a moist and delicious cake baked on top of a luscious rhubarb compote. Recipe with step-by-step photos.

There was a time last year when I accidentally ordered 3 kg (6 lb) of rhubarb instead of 3 stalks with my online grocery order. It was one of those errors where, upon realising the magnitude of my mistake, we could only laugh and be thankful that I hadn’t confused the order for, say, broccoli or beetroot.

I was also rather grateful that the mistake pertained to my favourite forced rhubarb which is generally only available from January to March in the northern hemisphere.

Forced rhubarb is the bright pink variety which, when cooked, turns a vivid fuchsia pink. This makes them perfect for using in rhubarb desserts like this Blushing Betty.

My favourite recipes for rhubarb include my Rhubarb Crumble with Strawberries (which I make at least a dozen times in winter!) and Rhubarb Custard Cake.

As I was looking for more ideas on how to use up my excess rhubarb, I came across a recipe for Blushing Betty in Stephanie Alexander’s The Cook’s Companion. I fell in love with the name of the dessert and instantly knew that I would love it!

A Blushing Betty is a cake sponge baked on top of stewed rhubarb. In other words, it is like a Rhubarb Crumble but with a sponge topping instead. It is a deliciously comforting rhubarb dessert, perfect on those cold, wintry nights when you need something warming.

This Blushing Betty recipe is loosely based on the recipe I use for Eve’s Pudding, which is made with apples instead of rhubarb.

For this rhubarb dessert, I like to make a simple rhubarb compote using just rhubarb, vanilla sugar and water.

Forced rhubarb is best for this Blushing Betty so that you have that vivid pink contrast against the tender cake sponge. However, regular rhubarb, i.e. the green/red variety, works just as well in this recipe and will taste exactly the same.

How to Make Rhubarb Pudding

Make the rhubarb filling by chopping it into 1 cm slices. Place the rhubarb into a large saucepan, together with the sugar and water. Cook the rhubarb over medium heat until the rhubarb softens and starts to break down.

As the rhubarb will continue to cook in the oven, try to not overcook it at this point, so that you still have some chunks of rhubarb in the filling to give a bit of texture to the pudding.

You also want the rhubarb filling to be somewhat moist, i.e. not too thick in texture, so that the resulting pudding is moist and luscious underneath.

Pour the rhubarb into a pie dish with a 1 litre/4 cup capacity.

Make the batter by creaming the butter and sugar together until it is light and fluffy.

Add the vanilla, and then add one egg at a time, followed by a tablespoon of flour to help prevent the batter from curdling.

Add the rest of the flour, together with the milk, and beat until you have a thick and smooth batter.

Dollop the batter over the cooked rhubarb, and use a spatula to gently spread the batter. Don’t worry too much about covering the rhubarb completely – the cake will spread and rise as it bakes in the oven.

Generously sprinkle the batter with demerera sugar and flaked almonds.

Bake for 30-40 minutes, or until the pudding is lightly golden and set in the centre.

Check the pudding at about 25 minutes, and if it is browning too quickly at this stage, loosely cover the pudding with a sheet of foil for the remaining baking time.

What to Serve with Rhubarb Pudding

Vanilla ice-cream is also a good option, although my family are often happy to eat this Blushing Betty as it is, like a warm cake. 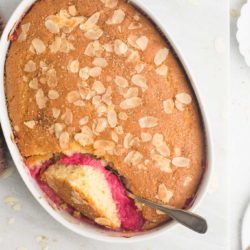 A Blushing Betty is a rhubarb sponge pudding with a moist and delicious cake baked on top of a luscious rhubarb compote. Recipe with step-by-step photos.

For the rhubarb filling

For the cake topping

For the rhubarb filling

For the cake topping

To bake the Blushing Betty