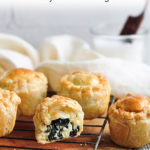 These Spinach and Feta Pies contain just a few ingredients but have maximum flavour. Make them as small or as big as you like, perfect for snacks or light meals.

When it comes to entertaining, it’s always good to have a few vegetarian options, and these Spinach and Feta Pies (also known as Spanakopita) are one of my stand-by options.

As an Australian, I also have a fond affection for a party pie, so it is hard to host a party without making a batch of pies, vegetarian or otherwise.

I was first introduced to these puff pastry pies by a lovely South African friend who made these for dinner one night. I was floored by how simple the recipe was and have been making them ever since with a few minor tweaks, but this is essentially her recipe.

You can make these Spinach and Feta Pies (or Spanakopita pies) as small or as large as you like. For my son’s first birthday party, I somehow found the time and patience to make these pies in mini muffin pans to produce tiny bite-sized pies.

At other times, I like to use a regular muffin pan to produce small pies (like those pictured) which are perfect for serving as a light meal, or even as a substantial party pie.

When I am pushed for time, I simply cut out large squares from a sheet of puff pastry, place some filling towards one side, and fold over half of the pastry to form a triangle, and seal the edges.

Another idea is to make them like Sausage Rolls, i.e. fill a strip of puff pastry with the spinach and feta filling, roll up the puff pastry to encase the filling in a large log, and cut off small pieces.

Now matter how large or small you make these Spinach and Feta Pies, they are sure to be a hit!

These Spinach and Feta Pies are also a great way to get some spinach on the table, although my children happen to love spinach – it might be a temporary phase but I am taking full advantage! I use either fresh baby spinach or large spinach leaves, but frozen spinach also works well in this recipe. 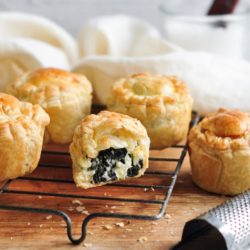 These Spinach and Feta Pies contain just a few ingredients but have maximum flavour. Make them as small or as big as you like, perfect for snacks or light meals.

VARIATION
If you are in a hurry, make this appetiser like Sausage Rolls. Simply halve a sheet of rectangular puff pastry so that you have two long strips. Place some of the spinach and feta filling into the middle of each strip so that you have a long “sausage” of the filling. Brush some egg wash along one edge. Roll up each log and rest the log on the seam. Use a sharp knife to cut small lengths off each log, about 4 cm in length. Brush with egg wash and bake until nice and golden.

This recipe was first published on 29 December 2017. It has been updated with more comprehensive recipe notes.