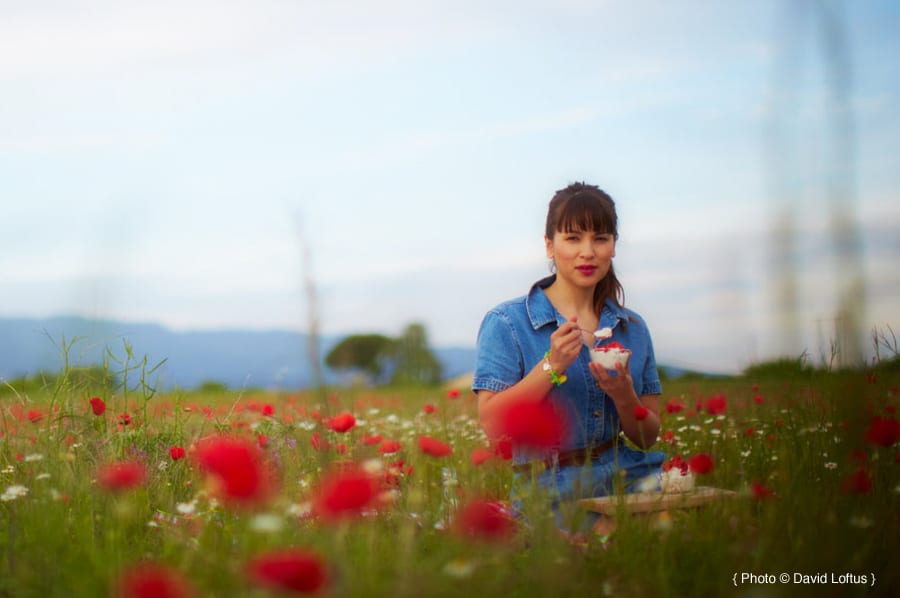 If you were smitten by Rachel Khoo‘s creative approach to classic French recipes in The Little Paris Kitchen, you will delight in the release of her new book, My Little French Kitchen, with her fresh take on more regional French cuisine.

In My Little French Kitchen, Rachel takes you on a culinary journey from the far north-western corner of France in Brittany, down towards the Mediterranean in Provence and over to the German-influenced Alsace. Along the way are recipes inspired both by the region and local classics.

In Brittany, an area where my in-laws live, Rachel reinvents the traditional buttery pastry, the kouign-amann, as little kouignettes made pretty with redcurrants. If you have a bottle of crème de cassis lurking in the drinks cabinet, her sticky cassis pork ribs will have you licking your fingers with greed. Rachel’s penchant for bright colours is evident in her version of a brioche loaf studded with pink pralines, while duck legs are given an Asian-inspired makeover with a spicy sauce made from roasted grapes and sweet wine.

Here on Eat, Little Bird, Rachel’s Kugelhopf and Ham and Vegetable Pastry Puffs have been a big hit, as well as some other recipes which will be published soon on this blog over the coming weeks. As someone who travels to France frequently, I find Rachel’s take on French food to be inspiring, and her new book has barely left my kitchen bench since I first bought it – a sign of a keeper.

In a special interview for Eat, Little Bird, Rachel Khoo tells us what some of her favourite recipes from her new book are, plus she reveals a little more about her love of French food and more. Enjoy!

What are some must-cook recipes from My Little French Kitchen?
Well you already did one, the Kugelhopf. When I was testing this recipe I found it very hard not to eat at least 5 slices in one go. It’s very moreish! The Sticky Cassis Pork Ribs with Mint and Broad Bean Couscous are one my faves to do for friends. Walnut and Buckwheat Caramel Tart is perfect for teatime, although to be honest it’s delicious anytime. I’ve eaten it at midnight when I had the munchies.

Which region of France surprised you most when researching and testing recipes for My Little French Kitchen, and why?
I really loved the Saturday market in Rennes. It was the most amazing market I had ever been to. Unlike some of the markets in Paris which are mainly resellers, the market in Rennes was mainly farmers, producers or the fishermen selling their own produce. Everything was so fresh, the range of seafood and size of the lobsters were huge.

What are some of your favourite French cheeses?
I love an 18 month Comté. A creamy Brillat Savarin is pretty amazing too.

If you had 24 hours in Paris, which places would you recommend for breakfast, lunch and dinner?
A freshly pressed juice at Bob’s Juice Bar and grab a pastry at Du Pain et Des Idées around the corner. As for lunch, if the weather is nice, head to one of the markets and pick up some cheese, charcuterie, a baguette and a bottle of wine and have a picnic along the canal or seine. I recently had dinner at Bistro Bellet in the 10th. Excellent classic French food at a good price. Plus they’re open late (serve food until midnight) which is rare in Paris.

When you are not indulging in French food, what do you like to eat?
I love Asian food (my dad is Malaysian) from stir fry, dim sum to curry. Although, to be honest, I’m not that fussy as long as I don’t have to cook (when you’re cooking all the time for work it’s nice to get a break).

What are your do’s and don’ts for a dinner party?
Do prep ahead. Don’t choose an over complicated menu. Simplicity is best.

What would you typically cook when you have friends coming over for dinner?
It really depends who is coming and also what kind of recipes I’m testing at the moment. I’m in the process of writing my next book, Rachel Khoo’s Kitchen Notebook (which won’t be French based) so it’s a bit of hotch potch of cuisine.

What is your favourite way of roasting a chicken?
Smearing it with plenty of butter and a generous sprinkle of fleur de sel.

What are your top 5 essential kitchen implements?
A good sharp chef’s knife, a mandoline (the plastic Japanese ones are the best), a heat-resistent spatula, microplane grater and a speed peeler.

Do you have any kitchen gadgets which you love but rarely use?
I was given an ice-cream machine which I have yet to use.

Moving countries to pursue a career takes a lot of determination, but moving countries to follow a dream career requires even more courage. What words of motivation could you share with someone who is contemplating a career change, whether at home or abroad?
There’s nothing to lose. You can always go back to your previous job. Any experience you gain from changing career, whether you succeed or not, will be valuable for any future job.

And lastly (but very importantly!), what is your current favourite lipstick?
I’ve just rediscovered lipgloss for my days off from red lipstick. Love Bobbi Brown’s sheer colour lip gloss in Chocolate Raspberry. It tingles in a fresh minty way when you put it on. 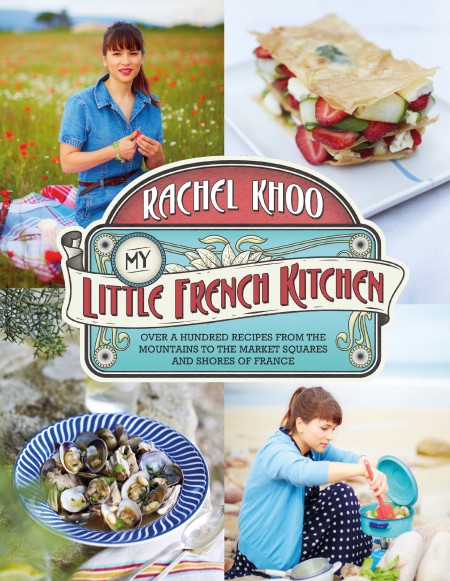 The lovely people at Penguin Books are giving away one copy of Rachel Khoo’s latest cookbook, My Little French Kitchen, to a lucky reader of Eat, Little Bird.

To enter, simply leave a comment below and tell me what your favourite French food is.

This giveaway is open to anyone worldwide.

The winner will be drawn at random on Monday, 3 March 2014 at 9.00pm UK time and will be notified by email. Bonne chance!

UPDATE: Congratulations to KatieK and Leone! You have both won a copy of My Little French Kitchen.