One of my favourite places to visit is Stockholm, not just because we have family living there, but I have always had a strong affection for Swedish design and food culture. And I’m not just talking about IKEA and their meatballs – I am a huge fan of both, by the way! I love many Swedish brands of furniture and home design, I love Swedish cuisine, and I love Fika. And the popular accompaniment to coffee at any Fika are Swedish Cinnamon Buns.

Fika is the Swedish concept of “a coffee break”; a pause in the day for a tea or coffee, with a small bite to eat.

In the same way that other cultures might have morning tea, afternoon tea, le Goûter, Zvieri or Znüni, Fika is similar, except that it can take place at any time of the day.

“Fika” is both a noun and a verb, and the Swedes will tell you that it is more than a simple coffee break. While most cultures will be familiar with the concept of “grabbing a quick coffee”, the Swedes instead slow down and take a proper break.

What are Swedish Cinnamon Buns?

Swedish Cinnamon Buns are made from an enriched dough, similar to a French Brioche. They are generously spiced with cinnamon and ground cardamom, and typically decorated with pearl sugar to differentiate them from another classic bun, the Cardamom Buns.

Both the Swedish Cinnamon Buns and Cardamom Buns are traditionally shaped in a twisted knot, but this can vary. I have seen some bakeries in Sweden make their Cinnamon Buns in a snail-like coil, similar to American-style Cinnamon Rolls. But unlike the American version, the Swedish buns are not frosted, and they are not as sweet.

They are, however, absolutely delicious, and I try to sample as many as I can every time we visit Stockholm. The Swedes love them so much that they even have a Cinnamon Bun Day on 4 October every year!

Having had the fortune of indulging in both treats in both countries, I think the Swedish version is much more heady in spice. Hence, I have used a lot more cinnamon in the filling, as well as ground cardamom for extra warmth.

The main difference between Swedish Cinnamon Buns and American-style Cinnamon Rolls is the shape; the former involves cutting the dough into strips, which are then twisted and shaped into a knot, thereby exposing the delicious filling. However, it is not uncommon to find cinnamon buns in Sweden which are shaped into snail-like coils.

And whilst American Cinnamon Rolls are typically soft and fluffy, and generally quite sweet, the Swedish version is more bread-like in texture and taste.

How to Make Swedish Cinnamon Buns

Measure the flour, sugar, yeast and salt into the bowl of an electric stand mixer. Lightly mix the ingredients together.

Add the egg to the bowl. Slowly add the warm milk (you may not need all of it), and lightly beat everything with the dough hook until it comes together into a large ball of dough. Only add as much milk as you need to bring the ingredients together into a dough.

Slowly incorporate the butter, one tablespoon at a time, until all of the butter has been used.

Then increase the speed to medium and continue kneading with the dough hook for 15 to 20 minutes, or until the dough is smooth and elastic.

Lightly oil a large mixing bowl, and place the dough into the bowl. Cover the bowl with a clean tea towel and leave it somewhere warm for 1 to 1.5 hours, or until the dough has doubled in size.

Once the dough has doubled in size, punch it back and knead it gently into a smooth ball.

Fold over one-third of the dough towards the centre, and overlap with the other side of the dough. Gently roll the dough to sandwich the layers together and to release any air bubbles. You should have a rectangular shape measuring approximately 30 x 15 cm/12 x 6 inches.

Cut the dough into strips measuring 2 cm/0.75 inch wide. You should have about 13-15 strips, but this will depend on how wide you rolled your dough.

Wrap the dough around three of your fingers in your left hand (if you are right-handed), and finish the knot by tucking the end of the dough into the centre of the knot on top.

Another variation is to finish the knot by stretching the end of the dough over the top of the bun and tucking it underneath.

There are many different ways of shaping Swedish Cinnamon Buns, so feel free to experiment to find which method is easiest for you, or which shape you prefer.

Place the shaped dough on a sheet pan lined with baking paper. Space them apart generously. Set the pan aside somewhere warm for about 30 minutes, or until the buns have puffed up slightly.

Meanwhile, preheat the oven to 200°C/390°F with a metal baking tray on the middle shelf.

Brush the buns with egg wash, and sprinkle with pearl sugar.

Bake the buns for about 20 minutes, or until the buns are lightly golden. Check the buns at about 10 minutes, and if they are browning too quickly, cover them with a loose sheet of foil for the rest of the baking time.

The buns are cooked if an internal thermometer reads 85°C (185°F). Gently remove the buns (intact) to a wire rack, and leave them to cool completely. 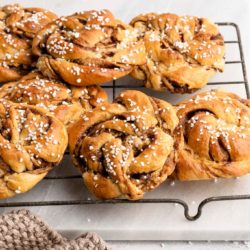 For the Cinnamon Filling

For the Egg Wash

You will need approx. 3 hours to make the Swedish Cinnamon Buns

To Make the Dough

For the Cinnamon Filling

To Roll out the Dough

To Shape the Cinnamon Buns

MAKE AHEAD TIPS
To start the Swedish Cinnamon Buns the night before, make the dough as per the recipe, until they have finished their first proofing period. Without touching or deflating the dough, cover the bowl with a tea towel, plastic wrap or reusable bowl cover. Place the bowl in the fridge to continue proofing overnight. The dough will rise slightly more overnight in the fridge. The next day, proceed with the rest of the recipe. As the dough will be cold, the buns may require a bit more time for the second proofing period.

DIFFERENT TYPES OF FLOUR
* This recipe works best with strong white bread flour.
* For Swiss readers: I use Zopfmehl (or farine pour tresse) when making bread and enriched dough.

DIFFERENT TYPES OF YEAST
* Please note that there is a difference between instant yeast (also called instant dried yeast or fast-action dried yeast) and dried yeast (also called active dry yeast). If you are not sure what type of yeast you have, please check the packaging for instructions on how to use the yeast.
* With instant yeast, you can add it directly to the flour mixture without having to activate it first.
* With dried yeast, you will need to activate it first (usually in some warm liquid).
* If you are using fresh yeast, you will need about half a block (40 g fresh yeast = 14 g instant dried yeast). Crumble the fresh yeast into the warm milk, and stir to dissolve the yeast.

PROOFING THE DOUGH
Dough needs a warm environment for the yeast to activate and cause the dough to rise. If you don’t have a warm place in your home, try one of the following ideas:
* In the oven with the oven light switched on (works only for some ovens).
* In the oven with a tray of boiling water on the bottom shelf.
* In the oven or a steamer oven at a low temperature of about 25-40°C (77-104°F).

LEFTOVERS
These buns are best eaten on the same day they are baked. Any leftovers should be stored in a ziplock freezer bag to keep them soft, and for up to 1-2 days.