A deliciously spicy and fragrant Vietnamese beef noodle soup with lots of fresh herbs and garnishes.

There is often a debate amongst my Vietnamese friends as to what our favourite noodle soup is. For me, it is always a toss-up between a classic Vietnamese Beef Pho, a tomato and crab soup called Bun Rieu, or a spicy Bun Bo Hue.

What is Bun Bo Hue?

Bun Bo Hue is a beef noodle soup which originates from the central Vietnamese city of Hue.

Outside of Vietnam, it is less known than its cousin, the classic Beef Pho, which many describe as the national dish of Vietnam. However, lovers of spicy food are likely to favour Bun Bo Hue for its addictively spicy broth and textural affair with all of the fresh garnishes like sliced banana blossoms or finely shredded water spinach (morning glory).

What is the difference between Pho and Bun Bo Hue?

A classic Beef Pho has a clear beef broth and is served with flat rice noodles.

Bun Bo Hue, on the other hand, is made using both beef and pork bones, and it is served with thick round vermicelli noodles which are quite similar to spaghetti. The broth is also slightly pungent and spicy, and the dish is usually served with more herbs and garnishes to add fragrance and spice.

The first thing you will probably notice about Bun Bo Hue is the fiery red broth. The colour is due in part to the chillies used in the satay (spice paste), and traditionally derived from using annatto seeds or annatto powder.

I have used annatto seeds in the past to create a bright red oil to colour the satay, but it is a fiddly step. Unless you have lots of recipes up your sleeve using annatto seeds, I find it works equally well to use just chilli powder and Korean gochugaru to create a nice red colour. The gochugaru creates a more subtle and earthy looking red, which I happen to prefer.

Annatto seeds or annatto powder, on the other hand, create a much brighter, blood-like red colour. If this is the colour you are aiming for, then simply cook 1 tablespoon of annatto seeds in the oil, strain and discard, then add the remaining ingredients for the satay (omitting the gochugaru).

One of the distinct ingredients used in Bun Bo Hue is shrimp paste.

Shrimp paste is a purple-brown condiment made from fermented shrimps. It is super pungent with a very strong and salty flavour – a little goes a long way!

I am personally not a fan of shrimp paste but, like anchovies, it is one of those umami-packed ingredients where you will notice its absence.

Most recipes for Bun Bo Hue call for 1-2 tablespoons of shrimp paste to be added to the broth. If you are not a big fan of shrimp paste, or you are new to using this ingredient, I recommend that you start with only a teaspoon and to increase according to your taste preference.

In many Vietnamese kitchens, it is completely normal to add a pinch of MSG to certain dishes to perk up the flavour a bit.

MSG, or monosodium glutamate, is a flavour enhancer and a salt which is naturally present in a large variety of foods. While it is completely safe to consume MSG, unfortunately, it has been unfairly (and wrongly) maligned in the past. The bottom line is: there is nothing wrong with using MSG in your cooking.

So even if you might be using a large quantity of meat bones and spices to make a soup broth, sometimes a bit of MSG is needed to take it up a notch.

If you are new to using to using MSG, I advise to start in very small quantities. Add a pinch and then taste if you need more. Adding too much MSG is a bit like adding too much salt – you can’t take it out. Also, too much MSG can make a dish taste unpleasant.

If you don’t want to use MSG, use instead beef stock cubes which are MSG-free. But to repeat, only add the MSG or stock cube if you feel the broth needs it.

Bun Bo Hue is comprised of a soup broth to which you add a satay paste, thus resulting in a spicy soup base. The satay is the spicy element of the soup and is what gives the soup its signature spicy flavour and red colour.

My recipe for Bun Bo Hue is made with my family in mind. I am the only one in my family who likes spicy food, and it is definitely a big effort to make a huge pot of Bun Bo Hue if it is just for me.

So I prefer to keep the satay separate from the broth, and to customise how much I add to each individual bowl. My kids essentially eat this soup without any satay added – I add just a drop to give a hint of colour to the broth. Without the satay, this is essentially a delicious noodle soup with a beef and pork bone broth. Make sure you still add some herbs and citrus to give the dish maximum fresh flavours.

My husband will take about 1 teaspoon of satay, whilst my portion might have up to 2 tablespoons!

You can add the satay directly to the bowl of noodles and mix it in once you add the hot broth. Or you can warm each individual portion of soup on the stove, together with the noodles, to ensure that each bowl is piping hot.

How to Make Bun Bo Hue

Like most Vietnamese noodle soups, making Bun Bo Hue is a labour of love. If you plan to serve it for dinner, start cooking at about noon. Once you break down the recipe into manageable steps, the process is actually not very hard.

When it comes to making Bun Bo Hue, I break down the tasks as follows:

Making Bun Bo Hue is very similar to making a Beef Pho Noodle Soup, but with the additional step of making the spicy satay which gives the Bun Bo Hue its signature spicy flavour and red colour.

The soup broth takes at least 3 hours to simmer until the meat becomes super tender and falls off the bones. But during this time, you can make the satay and prepare the noodles and garnishes.

If you have a stock pot which is big enough, I highly recommend doubling or tripling the recipe so that you can freeze the broth in portions, ready for any Bun Bo Hue cravings down the track!

What to Serve with Bun Bo Hue

Like most Vietnamese noodle soups, it is the accompaniments that make the dish. I have memories of my mother refusing to cook a certain dish because she couldn’t find Thai basil or another specific herb, even though she had all of the other ingredients to hand.

Once you have tasted a certain dish with all of the usual (and often obligatory) accompaniments, you will start to understand why you can’t have, say, Pho without Thai basil.

For Bun Bo Hue, the garnishes and accompaniments can form a long list. You should try to have as many as you can for a proper Bun Bo Hue experience, although I have noted the ones which I think can be optional if you want to cut down on the grocery shopping.

You will see in my photos that I have used finely shredded water spinach stems. Simply trim the leaves from the stems, then use a sharp paring knife to split the stem open in half. Then continue to cut long, thin strips from the stems, and submerge all of the thin strips in a bowl of cold water. After about 5 minutes, the strips will start to curl together. You can also find special gadgets at the Asian grocer to do this task more quickly, but I find them to be flimsy and a bit dangerous. 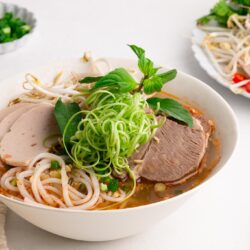 A deliciously spicy and fragrant Vietnamese beef noodle soup with lots of fresh herbs and garnishes.

For the soup broth

To blanch the bones

To make the soup broth

To season the soup broth

To make the satay

USING SHRIMP PASTE
I prefer to use only a tiny amount – enough to give a salty and funky kick, but not so much that it takes centre stage. If you are new to using shrimp paste, I also recommend that you only start with a small amount in this recipe. Otherwise, for seasoned shrimp paste lovers, you can add up to 1 tablespoon (or more) of shrimp paste to this broth.

VERMICELLI NOODLES
For Bun Bo Hue, try to find thick round vermicelli noodles. They should almost look like thick dried spaghetti, but white in colour. Some Asian brands even indicate “Bun Bo Hue” on the packaging. At a pinch, regular thin vermicelli noodles will work too.

HOW MUCH BROTH PER PERSON
For a generous serving, I like to give each person approximately 600 ml (about 2½ cups or 3 large ladles) of broth. This should give the cook an idea of how many noodles per serving, keeping in mind that the noodles will absorb some of the broth once added, and you want enough broth in the bowl for some slurping action.

MAKE IT WITH BEEF BONES
You can substitute the oxtail for beef short ribs. In which case, you could leave out the beef brisket as the short ribs will provide plenty of meat for the dish. Alternatively, use a mixture of oxtail and beef short ribs; the bones in the short ribs add additional flavour to the broth, and if you choose meaty short ribs, you can serve the meat with the soup later. When choosing oxtail, I prefer to use small to medium pieces, especially if you plan to serve them as part of the meal. However, for Bun Bo Hue, you will still need the pork trotters which give a distinct sweetness and flavour to the broth.

SEASONING THE BROTH
This is perhaps the trickiest part of the recipe if you are a novice cook. Knowing how to balance the flavours in a recipe takes practice, and how you like your broth will be different to how others like it. If you cooked your broth at a slightly higher temperature than I did for 3 hours, more water would evaporate during cooking, and your broth might turn out more concentrated, thus requiring some diluting with water at the end. Similarly, different brands of fish sauce vary in saltiness. But if you have followed the above recipe to the letter and you think the broth is still missing something, don’t be afraid to add a dash of MSG or crumble in a beef stock cube. Vietnamese home cooks do this all of the time!

HOW TO STORE THE BROTH
The broth keeps well in the fridge for several days and will turn jelly-like once cold. If you have made a large batch, you can freeze the broth in freezer bags. I recommend freezing the broth without the satay added, and to make the satay fresh when you want to defrost the broth.

FOOD STORAGE
All of the components of this dish should be kept separately in the fridge.