This Vietnamese Spaghetti Bolognese is a delicious Asian twist on an Italian classic.

Recently in the kitchen, I have been busy rustling up various Vietnamese dishes, including one of my favourite soups called Bun Rieu – a pork broth flavoured with crab and tomatoes, and served with vermicelli noodles and a pile of aromatic herbs.

I love to make a big pot of this soup so that we can eat it over several days, even if the sun is sweltering outside and we sweat uncomfortably while enjoying the mix of vibrant flavours and textures.

While it is traditional to serve Bun Rieu with fried tofu puffs and even stir through beaten eggs while the broth is simmering to produce ribbons of omelette in the soup, my mother always served it with a fish cake flavoured with Vietnamese seasonings.

I set about making my own version at home, winging it from taste memory; I have vivid memories of my mother buying a whole fish to make these fish cakes whenever she had friends coming over for a Chinese-style steamboat, and I would help by adding the seasonings while she worked the mixture together with her hands.

Often, she made fish balls but would also use the same mixture to fry in large pieces to make fish cakes like in the photo below. I still have to play around with the seasoning a bit, but I can’t believe it has taken me this long to try and make this myself at home.

One dish which I had fun recreating recently was a spaghetti bolognese with a Vietnamese twist which was, not surprisingly, the only version I knew during my childhood until I discovered Pizza Hut in my teenage years.

Most people are surprised to learn that I have a lot of family who have lived in Switzerland for many decades, including quite a few who emigrated here in the late 1960s.

You could imagine that, back then, it would have been near impossible to find Asian ingredients in this tiny land-locked European country, so my family would cook dishes taught by the locals, but adapt most of them to suit their Asian palates.

A traditional raclette, normally consisting of grilled cheese on boiled potatoes, would be given a Vietnamese spin with grilled meats marinated in (long-haul imported and frozen) lemongrass and chillies served in place of the usual sausages or cold cuts.

Fish Sauce in a Bolognese?

But my fondest memories are of my family sitting down to a meal of spaghetti bolognese, eaten with chopsticks with the full noodle-slurping sound effects which are entirely acceptable (and expected) in Asian cultures. Often, there would be a bottle of Maggi Seasoning nearby.

I don’t know exactly how my family made their spaghetti bolognese; the version they cooked in my childhood has varied over the years and is now more aligned with the proper Italian version.

But in discussions with my aunts and uncles, they all admitted to using fish sauce in place of beef stock, and one of my younger uncles claims that a dash of soy sauce is necessary for both colour and taste.

I had seen quite a few Italian recipes which use anchovy sauce as an ingredient, but specify Asian fish sauce as a substitute. So I figured that adding fish sauce to a bolognese sauce was probably not taking fusion food too far. And I was right.

The fish sauce adds a bold savouriness which you can’t get from salt alone, and you wouldn’t know this was a non-Italian version unless it was served, like in my grandfather’s home, with chopsticks.

For a traditional Italian-style spaghetti bolognese, I always turn to this faithful recipe which is perfect served on its own with pasta or used in, say, a lasagne.

But for a more shortcut version (and Asian cooking is quite often about fast food), this Vietnamese-inspired version was devoured by my family over several meals with much enthusiasm (and little care about its origins!).

If anything, I find this Vietnamese version of spaghetti Bolognese to be more flavourful, thanks to the intense savouriness of the fish sauce, as well as more fresh-tasting from the coriander (cilantro). I also like to add extra freshly cracked black pepper upon serving for an extra kick of spice.

If you are looking for more Vietnamese recipes, you may also like: 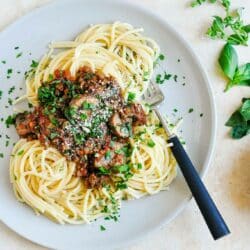 This Vietnamese Spaghetti Bolognese is a delicious Asian twist on an Italian classic.

BRANDS OF FISH SAUCE
There are lots of types and brands of fish sauce on the market, but the only one I use is Squid Brand Fish Sauce. It’s the one I grew up with, and the one which my mother faithfully cooked with when I lived at home (although she has since moved onto another brand which I find to be too strong in flavour and smell). Any good-quality fish sauce will do, but I would lean more towards the ones sold by Asian grocers than those in your usual supermarkets.

This recipe was first published on 6 July 2016. It has been updated with new photos and more comprehensive recipe notes.