In Zurich, there is a famous vegetarian restaurant called Hiltl, an establishment which has the honour of being the oldest vegetarian restaurant in Europe but which, at the same time, exudes a modern and hip culture reminiscent of any cool and carnivore-friendly restaurant. If you thought vegetarian restaurants were all about Hari Krishnas and inappropriate incense at the dining table, then Hiltl would completely change your mind about vegetarian restaurants. With an impressive buffet boasting foods from exotic Indian curries to European classics, together with an a la carte menu, each dish is packed with so much flavour that you hardly notice that the meat is missing.

And it was dining at Hiltl that made me look at vegetarian food in a new light. How often would a meat-eater name a vegetarian restaurant among their favourites? But that has been the effect of Hiltl, not just on me but for nearly everyone that I have brought to the restaurant. So famous is the establishment that they have published two cookbooks to enable fans to recreate some of their signature dishes at home. Alas, I have only attempted a few recipes to date, preferring to go to the actual restaurant for my vegetarian fix (which I do on nearly a weekly basis).

So there was a slight apprehension in adding Plenty to my collection of cookbooks, but with every turn of the page, each recipe kept jumping out at me, a sign that there is perhaps potential in this book after all.

Tonight I made the Aubergines with Buttermilk Sauce. The lovely Carrie made this some time ago which first piqued my interest in this book. The recipe is rather easy and straightforward, essentially requiring you to roast the aubergines for about 40 minutes until they are soft and bronzed in colour. The aubergines are then left to cool, during which time you can make the buttermilk sauce and extract the seeds from the pomegranate. 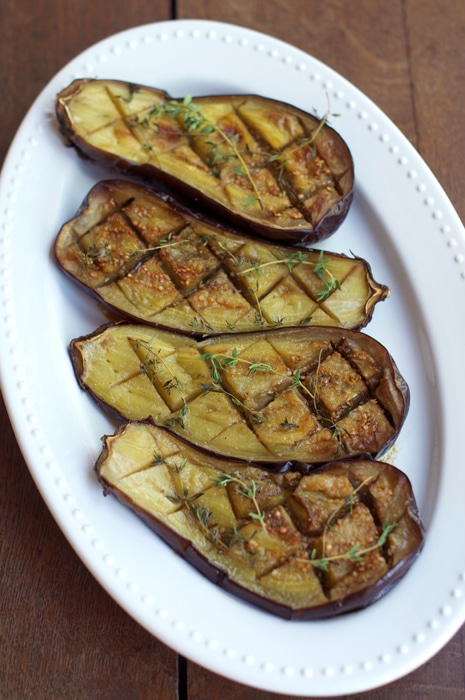 Being in the mid-west in the US at the moment, it was impossible to find za’atar so I had to forego this ingredient. I also couldn’t find lemon thyme and used normal thyme sprigs instead. But I don’t think the recipe suffered for these slight variations. The aubergines were lovely and tender and were beautiful drenched in the buttermilk sauce. The pomegranates not only added a wonderful, vibrant colour to the dish, but also some texture against the soft flesh of the aubergines, delivering little bursts of sweetness throughout. Though, again, I imagine you could also forego the pomegranates if they are hard to come by. 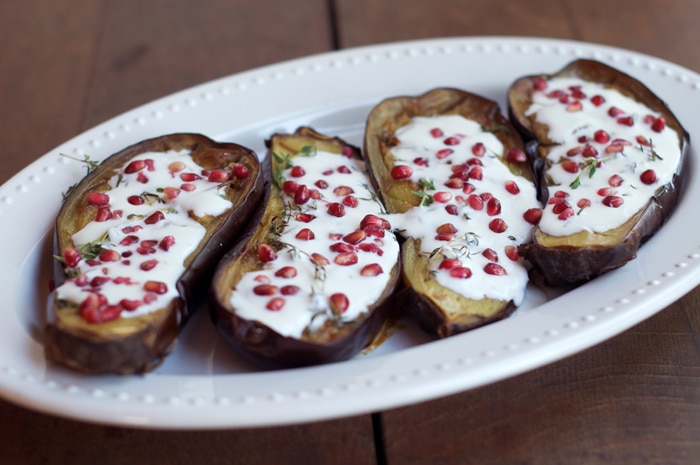 And now this is the part where I have to own up and confess that we didn’t exactly have a vegetarian meal tonight … roasted aubergines, buttermilk sauce, pomegranates … these ingredients just screamed for some lamb cutlets to go with! If it’s any consolation, the lamb cutlets were merely a side dish – the aubergines clearly took centre stage. Whilst the aubergines were in the oven roasting, I simply marinated the cutlets in olive oil, lemon zest, juice of half a lemon, salt and pepper and a dash of cumin. Needless to say, the lamb went perfectly with the aubergines. 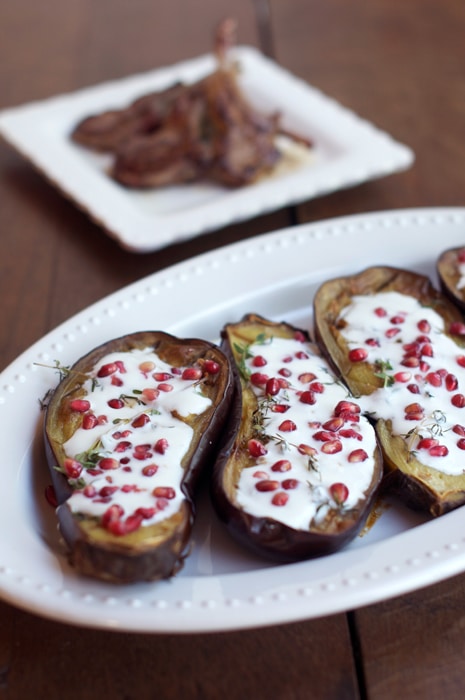 So whilst I was not completely successful at producing a vegetarian dish tonight, this recipe was certainly a success 😉

* I should mention that the US version of Plenty has an error in this recipe. The instructions require you to preheat the oven to 200ºF when it should in fact be 400ºF (or 200ºC).