Easy and elegant Vanilla Cupcakes with a classic Vanilla Buttercream Frosting. These Vanilla Cupcakes contain sour cream to help keep them tender and moist for days. Full recipe with step-by-step photos, plus tips on baking cupcakes in large batches.

I love a classic vanilla cupcake with a simple buttercream frosting. They always look so elegant and understated as they are, yet they lend themselves so well to fun sprinkles and other decorations.

One year, for my daughter’s birthday party, I baked and frosted four dozen vanilla cupcakes for all of the kids to decorate to their hearts’ content, and which they could take home as their party favours.

The kids had an absolute blast decorating with the various sprinkles and lollies on offer, even if it got a bit messy with sprinkles everywhere!

Baking so many cupcakes felt like a daunting task at first, but this vanilla cupcake recipe is so easy to make and reliable, that the baking part was honestly a breeze!

For many years, I tried countless vanilla cupcake recipes in search of “the one”; the one that would be soft and moist, but still have enough structure to stand up to any heavy frosting. The one that was not too dry and could keep for several days if need be, especially if I needed to make them in advance of a birthday party. The one that the kids would actually like to eat, and not just pick at because they lost interest after eating the frosting first!

And I think this vanilla cupcake recipe is “the one”.

One year, I lamented about the fact that I couldn’t find an equally good vanilla cake recipe, that if only there could be a vanilla cake which tasted just as good as the Sour Cream Chocolate Cake, but without the chocolate. And so I tried it, and it worked!!

There are different types of vanilla cupcakes. This one is soft and moist, dense yet light. It is not a fluffy cake, but it is not a heavy cake either. The sour cream in the batter keeps the cake tender and moist and gives it a good crumb.

In fact, these vanilla cupcakes keep well for several days on a covered cake stand, thanks to the sour cream. Which is handy to know because you can make these cupcakes up to a few days ahead of time and they will still taste perfectly fresh upon serving.

I used to think it was just the adults who would reach for the vanilla cupcakes, but I know many kids (my daughter included) who prefer this vanilla cupcake to the chocolate version.

How to Make Vanilla Cupcakes

Blitz until all of the ingredients are combined and you have a thick and smooth batter.

Line a 12 hole cupcake pan with paper cases (this recipe makes 12-15 cupcakes, depending on the size of your pan).

Let the cupcakes cool completely on a wire rack before decorating.

How to Make Mini Vanilla Cupcakes

Follow the same recipe below as for larger cupcakes.

How to Make Vanilla Buttercream Frosting

Place the butter in the bowl of an electric stand mixer. Using the flat paddle attachment, beat the butter until it is pale yellow in colour and lightly whipped.

If you plan to make a plain and undecorated buttercream frosting, I think it’s worth using vanilla bean powder (about 1/4 teaspoon) so that you can see the flecks of vanilla in the frosting.

But if you plan to decorate with sprinkles, normal vanilla extract would suffice.

Add the vanilla extract (or vanilla bean powder to the frosting) and hot water.

Keep beating until the frosting is thick and smooth.

When making large batches of cupcakes, I am always looking for ways to make the process efficient and stress-free.

Here are my tips for making cupcakes in large batches:

* I do my best to be environmentally friendly and try to avoid using disposable plastic bags. But for the few times a year when I have to do a lot of intensive baking in a short period, finding ways to cut down on the dishwashing (which has its own environmental impact) helps to maintain my sanity. 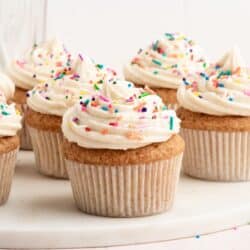 For the Vanilla Cupcakes

For the Vanilla Buttercream Frosting

To make the Vanilla Cupcakes

Make sure all of the ingredients are at room temperature before starting.

To make the Vanilla Buttercream Frosting

To assemble the Vanilla Cupcakes

QUANTITY OF FROSTING
This recipe makes enough frosting to pipe 15 cupcakes as shown in the photos. I used a 14 mm star nozzle in these photos. If you plan to use a larger nozzle or to use even more frosting on the cupcakes, I recommend making extra frosting (maybe 1.5 times the recipe).