As a child born in Australia to Vietnamese immigrants, I spent a good part of my youth believing I was just like any other Aussie kid. I ate meat pies and sausage rolls for lunch and spoke English with an Aussie accent. In fact, for most of my childhood, we lived in a small town on the Sunshine Coast in Queensland where we were the only Asians for several hundred kilometres; I was the only Asian in the entire school, but the community was so welcoming that I was never conscious of this fact. But such was my assimilation into Australian culture that I, unfortunately, barely had any interest in my Vietnamese heritage. Whilst my mother would be preparing a sweet and sour tamarind broth with a freshly-caught fish for dinner, I would be dreaming of rissoles with gravy and peas.

So, it is with much regret that I was never in the kitchen with my mother to learn all of those wonderful Vietnamese meals which, today, I crave so much. Like most Vietnamese mothers, mine cooks from memory and is hopeless at reciting recipes; her instructions are often along the lines of, “Add a small spoon of sugar” or “Pour in half a ladle of fish sauce“. So Vietnamese cookbooks have been my guiding light, both in deciphering my mother’s kitchen notes and helping me to keep in touch with my Vietnamese roots.

One new book which has been a jewel in my collection is Real Vietnamese Cooking by Tracey Lister and Andreas Pohl. What I find exciting about this book is that there are so many recipes for Vietnamese home dishes which you are unlikely to find in restaurants, or in most other Vietnamese cookbooks. Thanks to this book, I have been reacquainted with dishes such as Seaweed and Fish Soup, Crispy Chicken Wings with Fish Sauce, and Pork and Mushroom Pastries. There is also a comprehensive chapter on sauces and pickles, as well as a lovely collection of dessert recipes to surprise those who thought Vietnamese cuisine was lacking in this area. If you are curious to see what Vietnamese cuisine has to offer beyond the restaurant classics, or you are anxious to recreate some regional dishes from your travels to Vietnam, this book is a great place to start.

As briefly introduced in my post for Chicken Pho, Tracey Lister and Andreas Pohl are both culinary experts on Vietnamese cuisine. Tracey is one of the directors of the successful Hanoi Cooking Centre and helped to set up KOTO, an Australian-Vietnamese charity which trains disadvantaged youths in Vietnam to cook and serve. In a special interview for Eat, Little Bird, Tracey and Andreas answer some questions which I hope goes to the heart of real Vietnamese cooking.

What do you think sets Vietnamese cuisine apart from other south-east Asian cuisine?
One of the hallmarks of Vietnamese cuisine is that it borrows from its neighbours and turns it into something which truly is unique. It’s a cuisine which possesses a subtle elegance, not the least because of its judicious use of herbs.

Take the classic green papaya salad for example. The Thai version features hot chilli and a strong fish sauce. Not a herb in sight. The Vietnamese salad is more aromatic with the flavours of all the ingredients coming through. Chilli is used but doesn’t dominate, the fish sauce is understated and big leaves of Vietnamese Balm twist around the slivers of papaya.

What tips would you give to someone eating their way through Vietnam for the first time?
Be adventurous! Meals prepared by street vendors can be some of the best you will find anywhere in the world. Don’t be put off by the small stalls which operate according to the principle of “less is more”. These stall usually sell only one dish often based on a family recipe perfected over the decades. Another advantage is that there is no need to fret over a menu Vietnamese – you just need to sit and they will bring the dish out to you.

What are the main differences in Vietnamese cuisine as you travel through Vietnam from north to south?
Food in the north tends to be more Chinese influenced due to the proximity to China. Also the winters in the north get quite cool with temperatures going getting down to 2-3 degrees, so the cuisine reflects that. Dishes can be heartier such as crumbed and deep-fried spring rolls with mayonnaise.
In the centre, there are traces of a Thai influence, with more lemongrass and chilli used in cooking. And the South around the Mekong sees the emergence of Khmer and Malay spices in curries and also the use of coconut and tropical fruit in coking.

Where would you find the best Pho in Vietnam?
Pho originated in the northern Vietnamese town of Nam Dinh and without a doubt the best Pho in Vietnam is to be found in the North. There the focus is all about achieving a clear, lightly perfumed broth, specked with coriander and water mint. In the south, other ingredients, such as bean paste, basil and bean shoots are added to the broth, which can unnecessarily complicate the clean taste of the broth.

What do you see are the current trends in Vietnamese cuisine, both in Vietnam and abroad?
Vietnam is very good at taking what they like from other cuisines and adapting it to suit their palate. A recent craze in Vietnam is wasabi. It is not unusual to see tubes of wasabi at local wet markets and street stalls. Customers generously add wasabi to their sauces and dip in steamed crab or fresh spring rolls.

Internationally, Vietnamese cuisine is becoming increasingly popular. During the 1980s in Australia and other countries, many small Vietnamese restaurants opened up serving cheap and cheerful Vietnamese food, mainly from southern provinces. But in recent years, we have seen the cuisine elevated in more up-market restaurants. Also, the choice on offer has broadened with menus featuring dishes from all of Vietnam.

I love that your cookbook, Real Vietnamese Cooking, has many recipes for Vietnamese “home food”, i.e. dishes that you are unlikely to find in restaurants. What are some Vietnamese “home food” dishes which can be easily recreated without too many specialist ingredients?
Stir-fried Cauliflower and Prawns (page 82) is a good place to start: it’s a very quick and easy dish to prepare at the end of a long workday. Cabbage Rolls (page 278) are a favourite staff meal at the Hanoi Cooking Centre and require only a few ingredients which can be purchased from most supermarkets. Great on a grey winter’s day.

A traditional Vietnamese family meal often has 2 or 3 shared dishes which are eaten with rice. What are some recipes from Real Vietnamese Cooking which you would suggest as part of a shared meal?
A selection or all of the following would make up a solid Vietnamese-style family meal.

What type of wine would you serve with Vietnamese food?
The Vietnamese are not great wine drinkers, yet. Most prefer a Pilsener-style cold beer, such as Hanoi Beer, with their meal. However, with the increased affluence in the cities, more wine shops have opened recently targeting the Vietnamese middle classes. We find that a crisp white wine, such as a dry Riesling or Sauvignon Blanc, best complements most dishes. For the heartier winter fare from the north, a light red, such as a Pinot Noir, would also work well.

There are many different brands and types of fish sauce available in the supermarkets. Could you explain what the different types are and how they should be used in Vietnamese cooking? Do you have a favourite brand?
Look for a fish sauce that is of a deep but clear amber colour, without any sediment. Give the bottle a shake and you should see small bubbles coming to the surface. If the bubbles are large and rise quickly, the sauce does not contain enough fish oils. Then, look for the words Mam Nhi on the label. Mam Nhi is the first extraction of fish sauce from the earthenware vats which is less salty and has a lovely perfume. Fish sauces with a protein percentage over 40% are best and can be use in marinades, cooking or salads and dipping sauce. Fish sauces that are over 60% are generally only used at the table in dipping sauces or salad dressings.

We prefer to use the fish sauce from the southern island of Phu Quoc, as producers there only use one variety of fish – a variety of anchovie called ca com – in the making of the sauce which results in a crisp clean finish.

And finally, how would you make the perfect cup of Vietnamese coffee?
It is important to source real Vietnamese coffee, a strong, dark roast of mainly Robusta beans, with a slightly bitter and chocolaty taste.

Method
Put the coffee into the inner filter of a Vietnamese coffee filter, then put exterior filter on top. Do not press down too heavily, as you don’t want to compact the coffee. Place the filter on top of a cup or mug, pour 1/3 cup of boiling water into it and let sit for a couple of minutes to soften the coffee. Then pour more boiling water to the top of the coffee filter and allow it to drip though. This will take 4-5 minutes. Place the condensed milk and ice cubes in a tall glass and pour the coffee over the cubes. 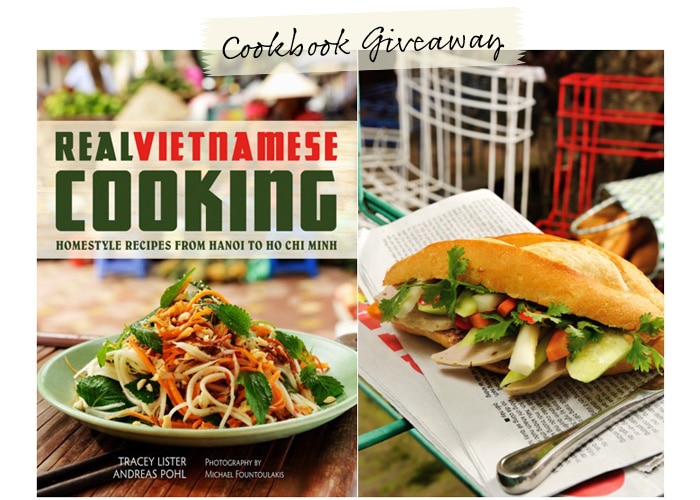 In association with Hardie Grant Publishing Australia and Hardie Grant Books UK, Eat, Little Bird has THREE copies of Real Vietnamese Cooking to give away.

To enter, simply leave a comment below and please indicate which country you are from in the drop-down box.

Entries will close at the end of Friday 6 June 2014 and the winners will be notified by email. Good luck!

UPDATE: Congratulations to Duncan Bourne, Claire Hargrave and Christy Brooks! You have each won a copy of Real Vietnamese Cooking.

*All images in this post have been extracted from Real Vietnamese Cooking by Tracey Lister and Andreas Pohl, published by Hardie Grant. Please check your local bookstore for prices and availability.