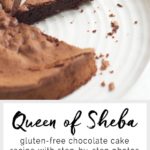 I am conscious that I have quite a few recipes for chocolate cake on this blog, but I suppose one more can’t hurt …

This recipe for Queen of Sheba Cake (or Reine de Saba) was given to me by my French mother-in-law after some pleading on my part. One afternoon, after she had served a procession of five courses at lunch, she brought out this beauty for dessert, a plain chocolate cake which tasted anything but.

This is a gluten-free chocolate cake which, unlike most which are rich and decadent, is instead light and soft.

And like most French cakes, this one is served plain with maybe a dusting of cocoa on top, or simply with whipped cream on the side.

Although the original recipe for a Reine de Saba uses butter (as most French recipes do!), I have made this cake on several occasions using coconut oil instead with perfect results.

Hence, if you need to make a dairy-free chocolate cake, this is your recipe!

My mother-in-law found the recipe for this cake, called a Reine de Saba, in a French magazine some many years ago. When she sent me the recipe, I instantly recognised the cake as one which Julia Child made on her show, The French Chef.

Fans of the wonderful Julia Child can watch the episode here where, back in the olden days, cooking shows had the luxury of devoting an entire episode to just one recipe:

If you are interested in Julia Child’s recipe, the recipe can be found in her book, The French Chef Cookbook.

Having compared the recipe below to Julia Child’s, it became obvious to me that there must be many different recipes out there for Reine de Saba.

On the other hand, my mother-in-law’s recipe is for a flourless chocolate cake, but which contains cornflour (cornstarch) for stability and is alcohol-free. Although, you could certainly add a dash of rum, Grand Marnier or even Frangelico to the batter for a more adult affair.

If you are also serving children, perhaps the best compromise is to serve a bowl of whipped cream on the side, laced with your favourite liqueur.

How to Make Gluten-Free Chocolate Cake 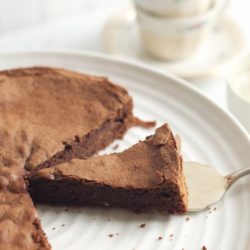 A Gluten-Free Chocolate Cake recipe with step-by-step photos. A French chocolate and almond cake which is light, moist, gluten-free and also dairy-free! Also known as a Queen of Sheba Cake (Reine de Saba).

MAKE IT DAIRY-FREE
The original recipe for Reine de Saba uses butter. To make this a dairy-free cake, I have made this recipe several times with coconut oil with very successful results. You can smell the coconut while the cake is baking, but there is barely any taste of coconut in the cake itself.

VARIATIONS
This cake is really delicious with the addition of 1-2 tablespoons of liqueur to both the cake batter and whipped cream, such as Frangelico, Cointreau, Grand Marnier, Amaretto, or rum.

OVEN TEMPERATURES All recipes on this website state temperatures for a regular oven (i.e. a conventional oven without fan). If you have a convection oven with a fan, please consult the manufacturer’s handbook on how to adjust the temperature and baking time accordingly.

CONVERSIONS To convert from cups to grams, and vice-versa, please see this handy Conversion Chart for Basic Ingredients.

This recipe was first published on 21 July 2013. It has been updated with more comprehensive recipe notes.