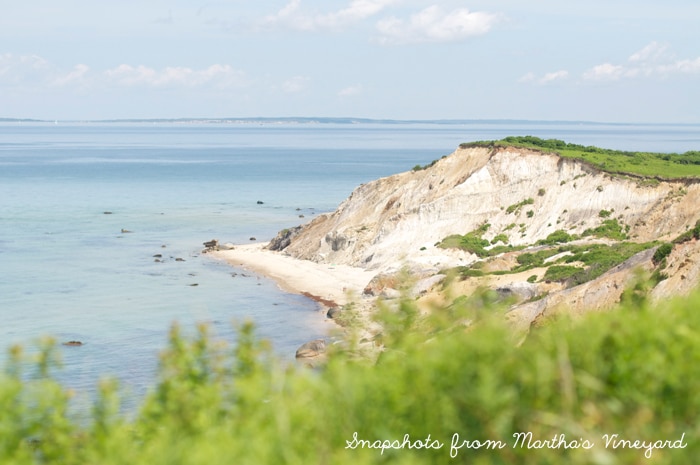 I had always dreamt of visiting Martha’s Vineyard, though it never quite occurred to me that an opportunity to actually do so would ever arise. The closest we had come once was when planning our honeymoon which eventually took place on the neighbouring island of Nantucket. But last summer, faced with the choice of returning to the idyllic comfort of Nantucket or visiting Martha’s Vineyard as a new destination, we suddenly found ourselves with a difficult decision on our hands. A Google search on “Nantucket vs Martha’s Vineyard” returned various forums and pages where people hotly debated the pros and cons of each destination. Being rather risk-averse, we made a safe bet in returning to Nantucket, but delighted in the discovery that a day trip to Martha’s Vineyard was possible via a short splash across the waters with Cape Air.

Martha’s Vineyard is not really a vineyard. Actually, I’m not sure if I saw any vineyards when we were there, so don’t expect a vast and sprawling wine region with scenic vineyards at every turn. What you can expect, rather, is an affluent island, home to high-profile personalities and a second home to many more celebrities. 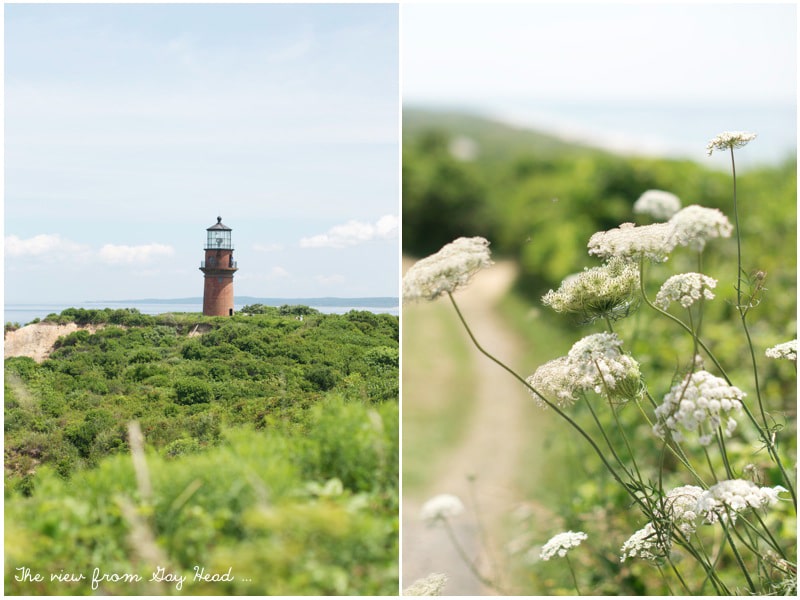 The first thing you notice about Martha’s Vineyard upon arriving is the lush greenery and the expanse of the island. Whilst one could easily ride a bicycle along the relatively flat terrain of one end of Nantucket to the other in a few hours, the same could not be said about its neighbour; a car or scooter is perhaps the preferred mode of transport on Martha’s Vineyard. Our taxi driver happily gave us tips on what to see and do during our day trip, even driving by the major landmarks before dropping us off near Oak Bluffs, one of the main towns on the island. 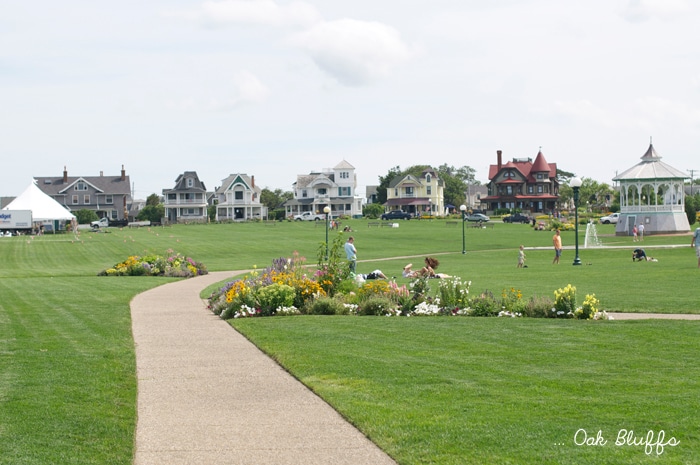 Upon our taxi driver’s recommendation, we first set off on foot to have a look at the Carpenter-Gothic cottages (or the gingerbread cottage houses) in Oak Bluffs, an area which looked like a movie-set given the many ornately and perfectly decorated small houses. I have to admit that it was a rather eery sight to see grown-ups living in tiny cottages resembling life-sized doll-houses, made somewhat more uncomfortable when we overheard residents sitting on their teeny-tiny porches telling people off for riding their bikes instead of walking them through the area … we quickly sensed that this little village was riddled with rules from everything concerning the facades of the homes to how the gardens should be manicured. But it was fascinating at the same time to see how loyal and passionate the locals were in maintaining their unique little community. 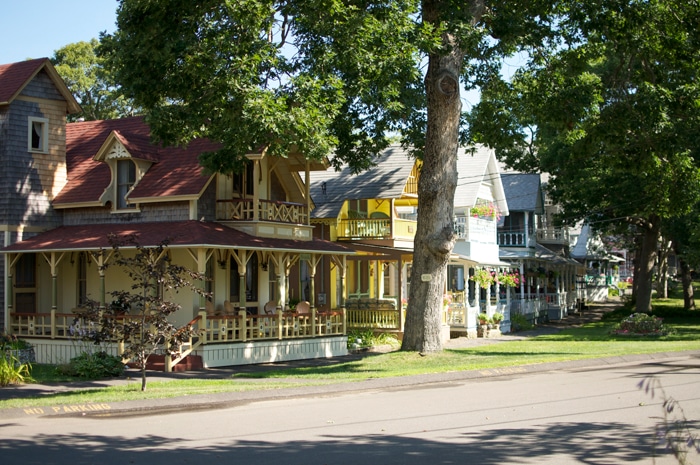 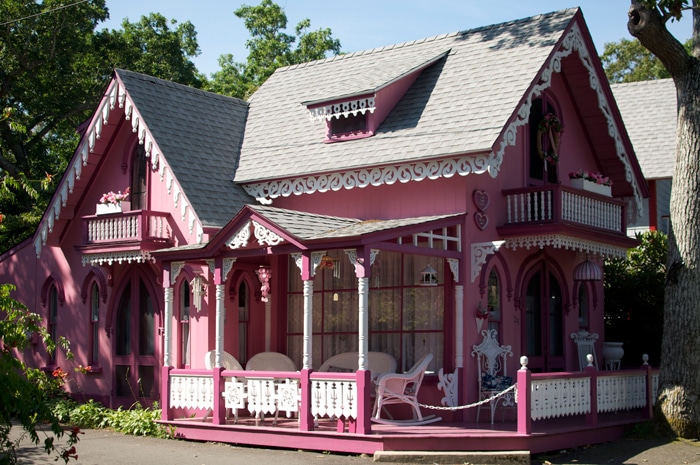 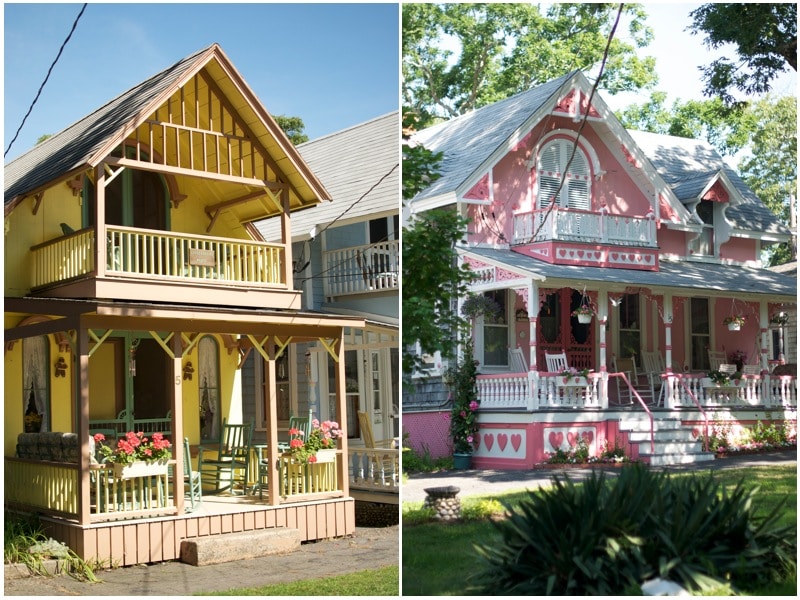 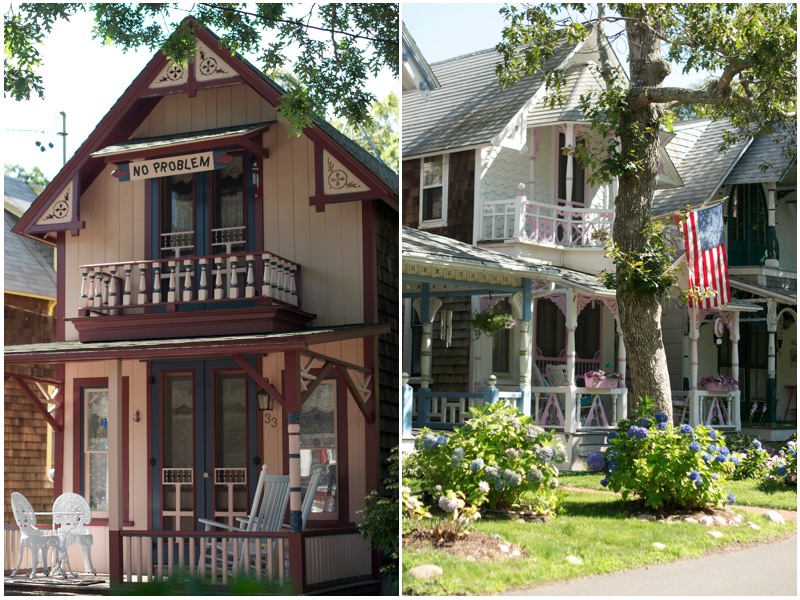 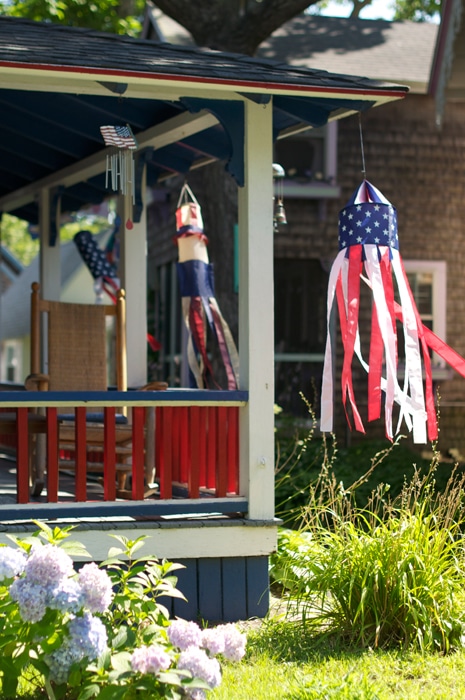 Having spent most of the week on Nantucket where we had gotten around either on foot or by bicycle, Martha’s Vineyard felt like a much busier and traffic-dense town. The place felt like most other seaside beach towns with lots of tourists walking around casually in their swimwear and flip-flops, queuing up at the local ice-cream establishments for a cool treat.

Hubby and I took a short stroll around the main street of Oak Bluffs and, tucked away at one end of Circuit Avenue, we came across the cute and quiet Slice of Life, the perfect place to stop in for a quick coffee and perhaps a late breakfast. We settled for ordering one serving of biscuits with bacon and eggs to share, anticipating that the usual American-sized portions would be too much for us, but were then somewhat disappointed to find that the servings were actually rather small (or normal, depending where you come from). But a second order settled any pangs of hunger and we were then ready to explore the rest of Martha’s Vineyard. 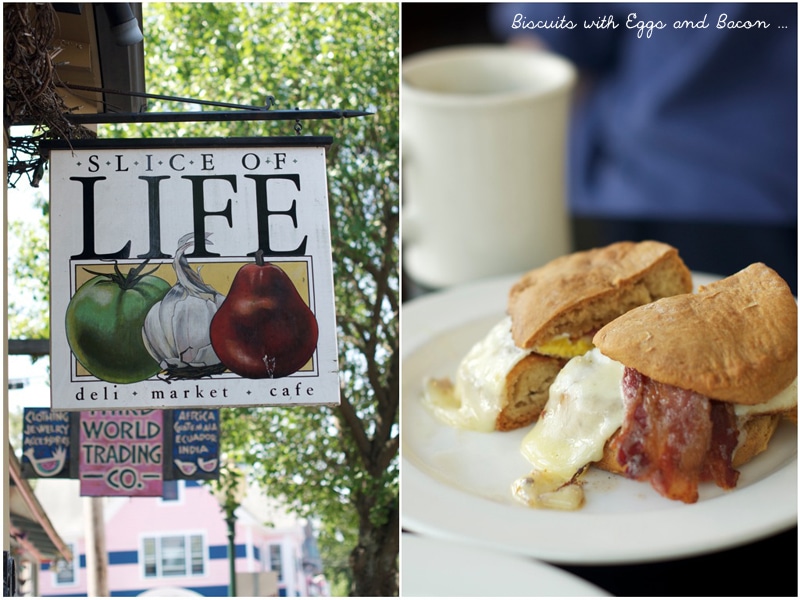 We walked around towards the pier, admiring the luxury yachts before noticing the large tourist buses which were getting ready to leave. An impromptu decision was made and we suddenly found ourselves on a 2 hour trip around the island in an old, large coach with a dozen other tourists. Our driver gave an almost non-stop commentary for the full duration of the tour, providing endless details about the uniqueness of Martha’s Vineyard and why it remains such an exclusive destination, shunning the commercialism associated with the fast food restaurants and fashion chain stores which have populated the rest of the country.

Despite that, most of his commentary revolved around the latest celebrity sightings, filling us in on who lived where, which driveway belonged to whom (many houses are nicely shielded by dense foliage, probably against nosey tourists like us), which US president went where for his favourite ice-cream (Mad Martha’s, we were told), where Jaws was filmed and what other movies had been shot on the island. If our bus driver was any indication of the locals, I think they love their celebrities. 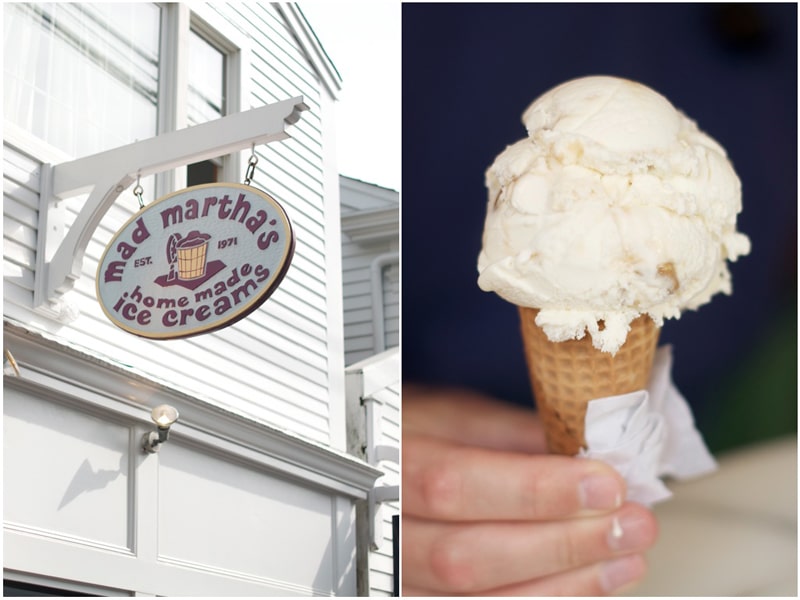 I think my favourite part of Martha’s Vineyard was Edgartown, a picturesque area with charming-looking homes, some old, some very grand. The traffic was quite busy in this area but there are lots of lovely little restaurants and cafés in the area, together with some interesting little boutiques if you are in the mood for some shopping. We stumbled across a store selling various sorts of items made from wood and which was closing down, and I happily selected a bread board made from cherry wood (which hubby carried, not so happily, for the rest of the trip!). 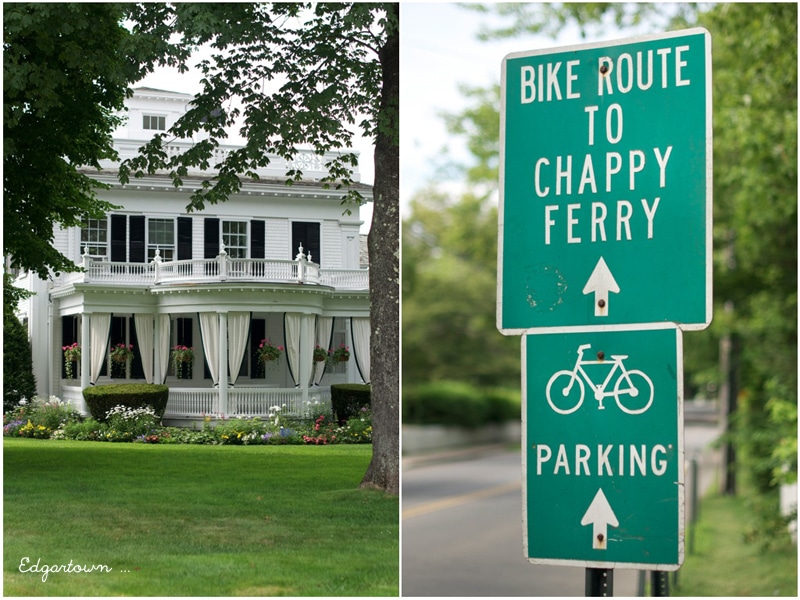 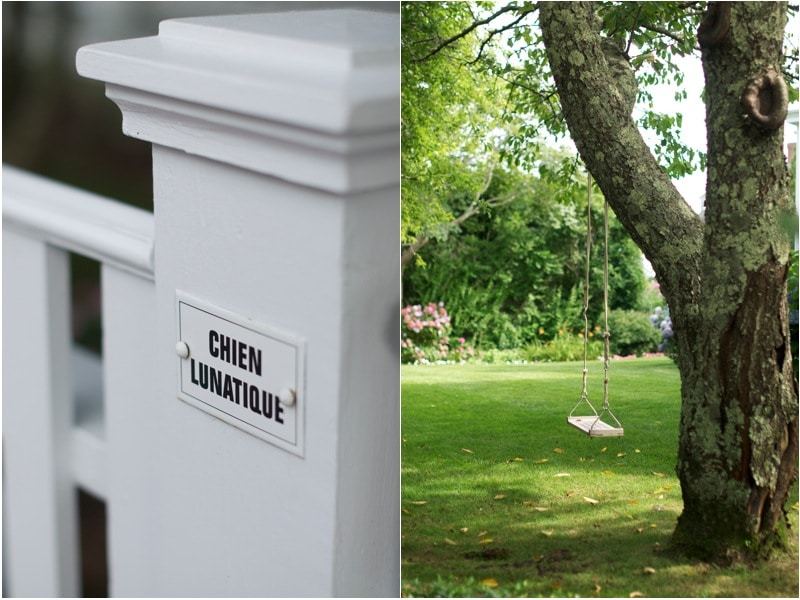 Back in Oak Bluffs, we took a late lunch at Nancy’s, a famous local establishment overlooking the water. Not surprisingly, they specialise in seafood and I always have a soft spot for fish and chips. Hubby settled for the bacon-wrapped scallops as a light lunch which were very tasty. 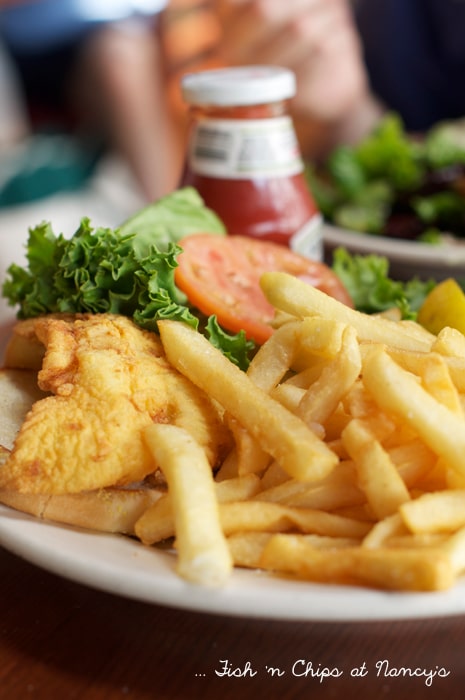 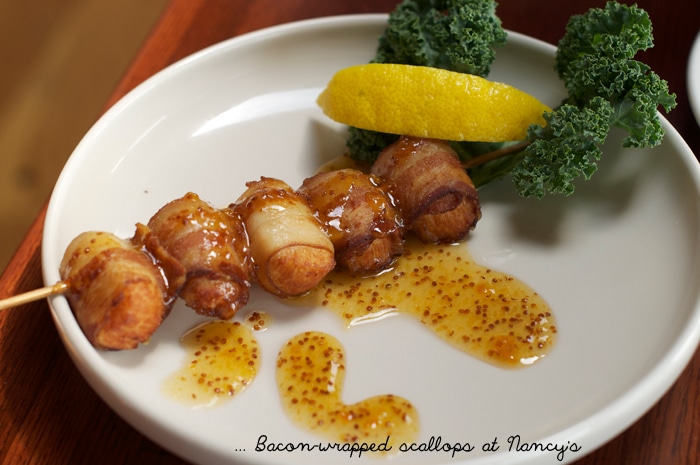 If you ever need to consider summer holiday destinations on the east coast of the US, Martha’s Vineyard is certainly worth a visit. But if you had to choose between Nantucket and Martha’s Vineyard? Without any hesitation, I would recommend … Nantucket.

For us, Nantucket is the ideal destination if you want to visit a small, secluded island where there are less people and almost everything is within walking distance. It is much smaller than Martha’s Vineyard, which is great if you don’t have a car or want a break from driving. What says holiday more than peddling a bicycle down to the beach with a beach towel and a packed lunch in the woven basket attached to the handlebars?

Martha’s Vineyard is much bigger and much busier. Although it is still a fun and relaxing place to visit, the sight of the many over-bearing SUVs makes you feel like you haven’t quite gotten away from the city. And because of that, Martha’s Vineyard doesn’t ooze that island-get-away feeling that Nantucket does so well.

But there are pros and cons to both islands. Martha’s Vineyard is by far the more popular island and there are certainly good reasons why. But if I had to be selfish, I wouldn’t mind if Nantucket remained the lesser-known island …

Has anyone been to either Nantucket or Martha’s Vineyard, or both? Do you have a preference?