Delightful no-bake Lemon Curd Tarts made with crushed speculoos or digestive biscuits and topped with a homemade lemon curd. A simple but spectacular looking dessert! 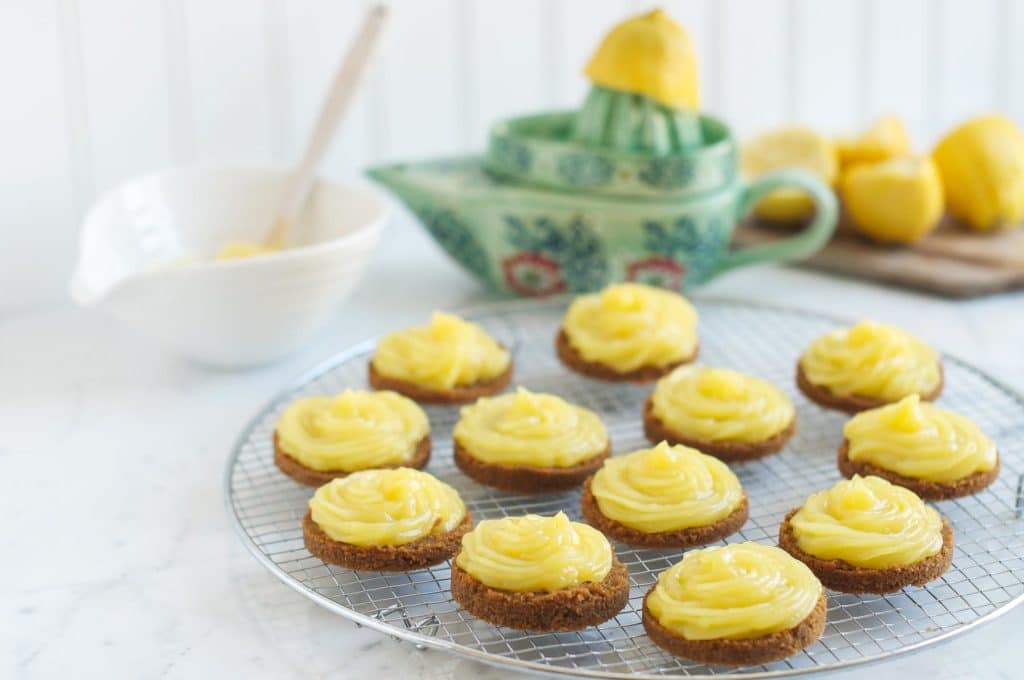 When I think of lemon tarts, I think of the French classic, tarte au citron. However, the following recipe happens to be inspired by the lemon curd of the English kitchen.

A lemon tart is traditionally made with a shortcrust pastry base and filled with a tart lemon custard, and which is then baked in the oven until the filling is just set but still tender.

The best lemon tart I had ever eaten was actually a lemon meringue pie at Eleven Madison Park in New York, a few years ago over a business lunch. At the time, I was not aware of the culinary status of the restaurant, probably because I was a nobody within the company whose business lunches were often restricted to the work canteen (at my own cost). So when my colleagues suggested a restaurant in the vicinity of the office, I was expecting a make-your-own-sandwich kind of place. Once seated with the menu in front of me, I began to see how the other half lived.

The pastry was light and buttery, the lemon filling was sweet but with an edge of tartness, and the meringue topping was crisp and sweet. It was a simple dessert, but beautifully executed. Sadly, no attempt of mine could ever recreate the same experience at home. Every lemon tart or lemon meringue pie I tried to make failed to meet my taste memory of that particular dessert at Eleven Madison Park. And like my troubles with baked cheesecakes, I could never produce a lemon tart which would set with the right amount of wobble. 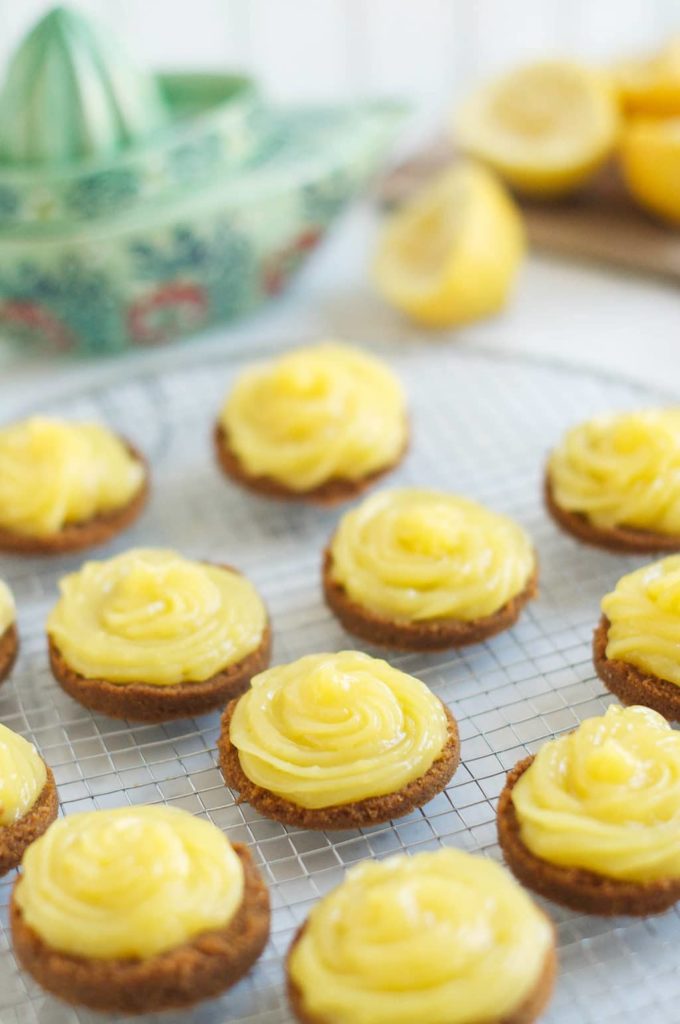 Which is why this particular recipe is such a blessing. This low fuss, no-bake lemon tart oozes homemade, rustic charm such that one need not worry about competing with a Michelin-starred dessert.

I found this recipe in a recent edition of Saveurs magazine, a popular glossy French food magazine which I love to pick up whenever I am in France (and not to be confused with the American food magazine of a similar name, Saveur). The simplicity of this recipe struck a chord with me and I was pleased to find that it was quite a forgiving recipe, that my clumsy piping skills were rather suited to the homespun look of these tartelettes. But despite the rough edges of these little beauties, they taste like something you might find in a fancy pâtisserie shop. 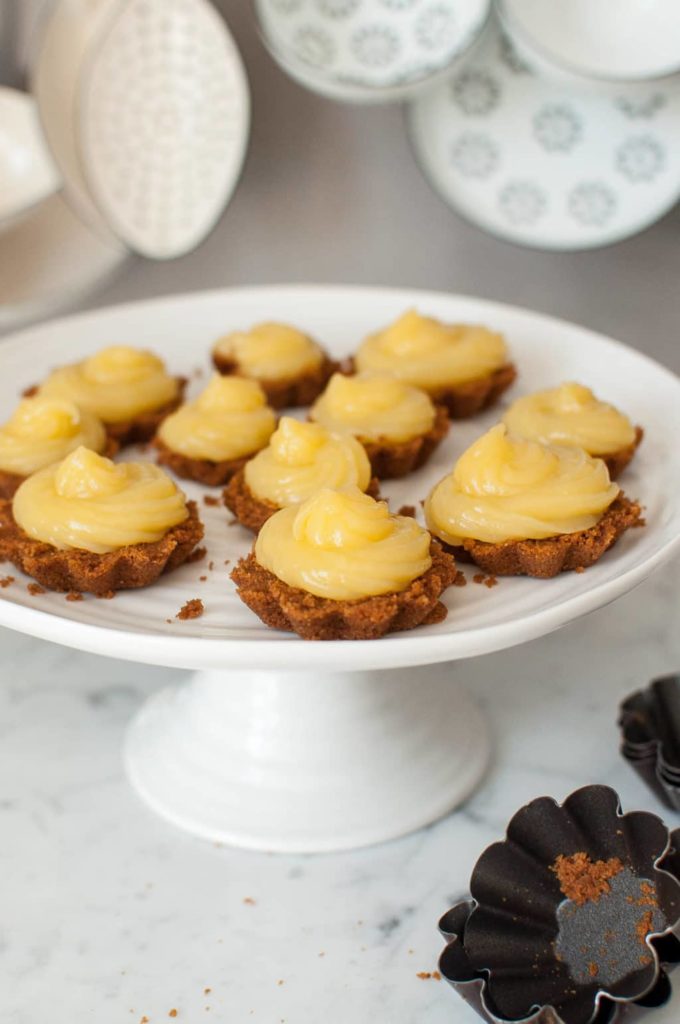 These lemon curd tarts are simply comprised of a base made with crushed biscuits and topped with a thickened lemon curd.

Use whichever moulds you like for these lemon curd tarts, and make them as big or as small as you wish. Non-stick tins will obviously provide for easier unmoulding.

The first time I made these lemon curd tarts, I used small brioche tins to produce dainty little tartelettes for an afternoon tea party. Once the biscuit base had set, I simply turned the tin upside down on the kitchen bench and gave it a light tap to release the base. However, this method was prone to crumbling the edges of the base a little (I was also in a bit of a hurry). 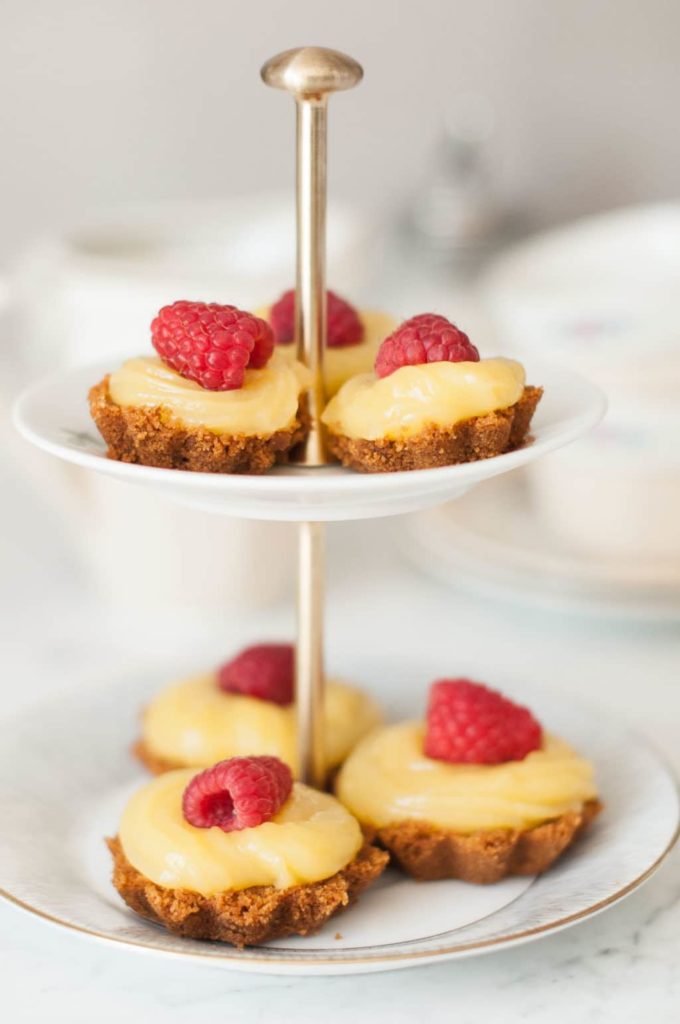 But a much easier (and less fiddly) method is to use a round biscuit or scone cutter and to place it directly on a sheet of baking paper on a baking tray which will fit in the fridge. Press some of the biscuit mixture into the cutter, about 1 cm high, and then carefully remove the cutter to leave behind a nice, round base. Repeat until all of the biscuit mixture is used. Then place the baking tray into the fridge for an hour or more to let the biscuit bases firm up.

An even more fuss-free option would be to make one large tart in a loose-bottomed flan tin, spread the lemon curd over the base and serve as is or decorated with fresh berries.

From one recipe, so many options. 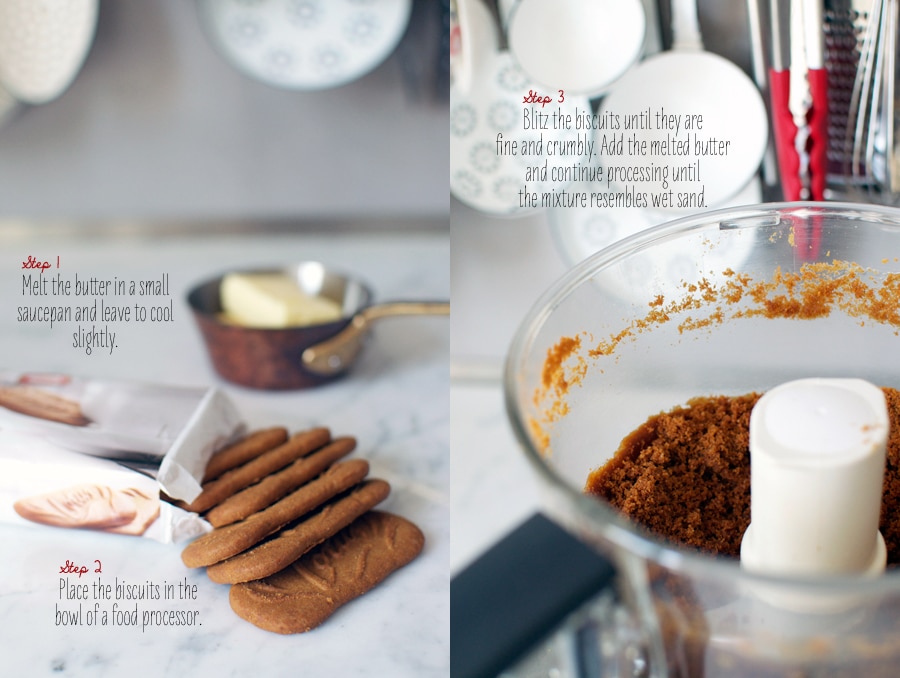 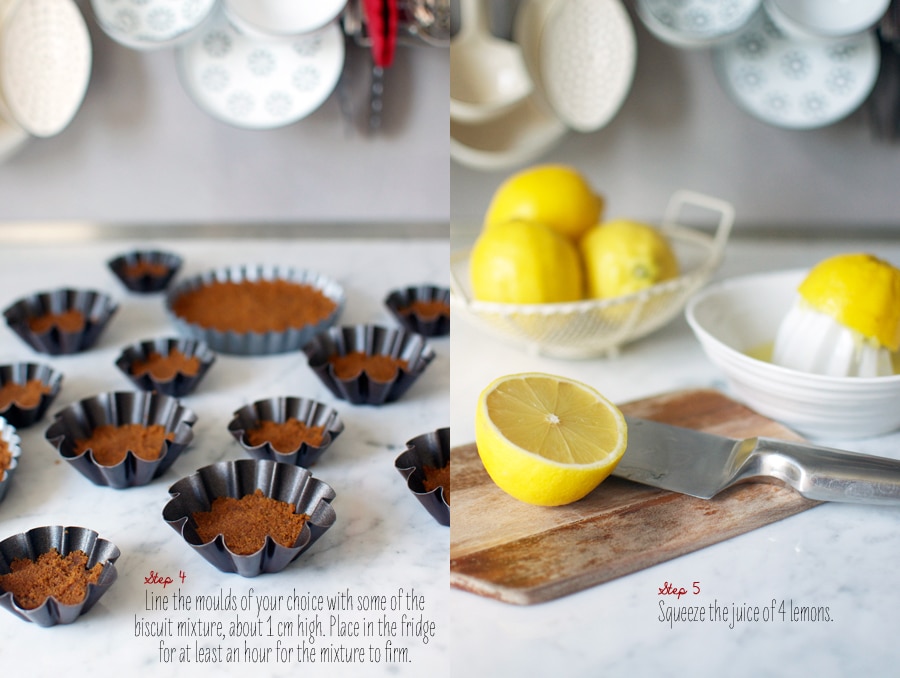 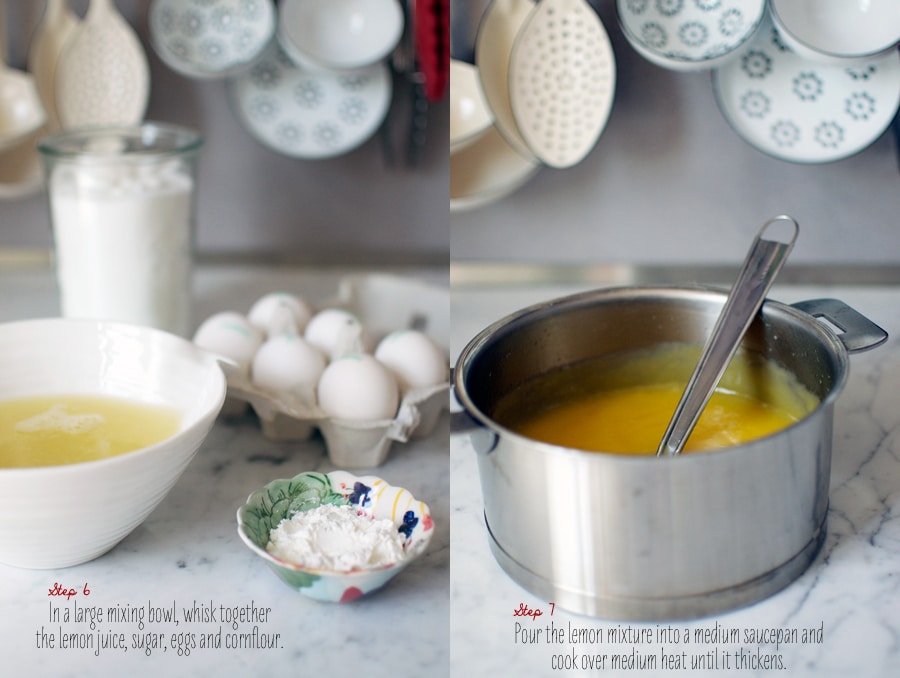 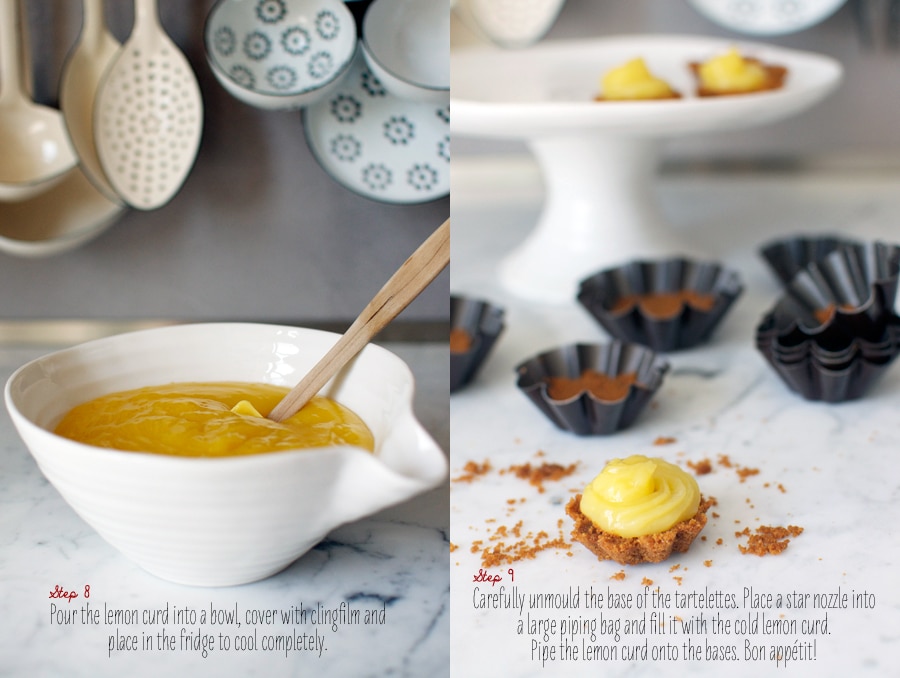 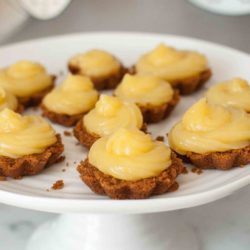 Delightful no-bake Lemon Curd Tarts made with crushed speculoos or digestive biscuits and topped with a homemade lemon curd. A simple but spectacular looking dessert!

If you cannot find speculoos biscuits, a good alternative would be gingernut biscuits, plain chocolate biscuits or even digestive biscuits.

You can make these tarts as big or as small as you like. For larger tarts, I recommend using small non-stick tart tins with a loose bottom.