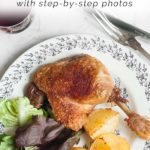 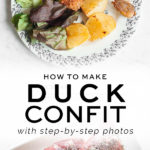 A classic French recipe for Duck Confit, or Confit de Canard, which are duck legs slowly cooked in duck fat until meltingly tender, and then pan fried until the skin is crispy and golden. Recipe with step-by-step photos.

Confit de Canard is a classic dish found in many Parisian bistros, and it is a dish which my mother-in-law likes to serve whenever we visit. After one of our trips to France late last year, I felt compelled to recreate this dish at home, primarily because I didn’t want to wait so long before eating it again.

What is Duck Confit?

Duck Confit is essentially duck slow-cooked in its own fat until it is meltingly tender, and then seared in a pan until the skin is golden and crispy just before serving.

Duck Confit could perhaps be described as the up-market, heart-stopping version of fried chicken, only so much more grown-up and more revered.

How to Make Duck Confit

The duck legs are often salted and seasoned generously for 1-2 days to draw out the moisture, as well as to add flavour to the meat.

Simply season the meat of the duck legs generously with sea salt and freshly cracked black pepper. Cover the duck legs with cling film, and place in the fridge overnight.

The next day, rinse the duck legs under cold water to remove the salt and pepper.

Pat the duck legs dry with some kitchen paper.

Melt the duck fat in a large pan which can fit all of the duck legs in a single layer.

Arrange the duck legs in the duck fat in a single layer, together with some bay leaves and sprigs of thyme.

The duck legs should be just submerged in the fat.

Also keep in mind that, as the duck legs are cooking, it will render some fat. So make sure that your pan is high enough to contain all of the fat.

The duck fat should be barely simmering, or else you run the risk of deep-frying your duck. I like to use a digital thermometer to make sure the oil is constantly at the right temperature.

If you find it difficult to regulate the temperature of the oil in the stove, I find it easiest to do this in the oven at 100°C/212°F.

To test if the duck legs are cooked, carefully remove one duck leg to a plate with the skin-side down. Gently pull at the meat with a fork to test if it is cooked to your liking.

For me, if the meat flakes away very easy, I know it is ready. If there is some resistance in flaking the meat, then cook the duck legs for a bit longer.

Once cooked, the duck can be stored in a clean container, completely covered with more duck fat, and kept in the fridge for about a month. In fact, the recipe for Duck Confit originated from south-western France and came about as a method of preserving duck for long periods of time.

Unless you live on a farm and are in the habit of rendering down whole ducks for their fat, you will have to buy duck fat which either come in cans or glass jars sold in the refrigerated section.

During the cooking process, the duck will render some of its own fat, as well as flavour, into the cooking fat. For this reason, it’s a good idea to keep the leftover duck fat to add extra depth of flavour in a later batch of Duck Confit, or to simply use for the best roast potatoes you will ever taste.

As with most classic French dishes, there exists a wealth of recipes for Duck Confit.

In French Food Safari, Michael Smith shares a recipe which doesn’t require overnight salting and can be prepared all in the same day. The duck, however, does require up to 1.5 hours of salting with an aromatic rub of peppercorns, juniper berries, garlic, bay leaf, thyme and lemon zest.

Thomas Keller also employs a dry marinade of salt and fresh herbs (including parsley), but cooks the duck at a much lower temperature of 88°C (190°F) for 10-12 hours. In Bouchon, Keller’s recipe for Duck Confit with Brussel Sprouts and Mustard Sauce is one of my favourite ways of serving Duck Confit.

I was surprised to find that the “Chef of the Century”, Joël Robuchon, had a fairly simple recipe for Duck Confit in his compendium, The Complete Robuchon. His salt rub is flavoured with garlic, fresh thyme, cloves and cracked pepper, but, unusually, he adds water to the duck fat to prevent the meat from colouring too much.

Perhaps the simplest  Duck Confit recipe I have tried, and which reminds me most of Duck Confit I have eaten in restaurants, is one by Stéphane Renaud in Ripailles, or French Feasts as it is called in the US. The recipe below is an adaptation of Renaud’s recipe, although his book also gives an illustrated description of how to preserve Duck Confit in sealed glass jars for up to 6 months – a handy recipe if you find yourself with a lot of duck to use up.

What To Serve With Duck Confit

To serve the duck, either straight from slow-cooking or after it has been preserved in the fridge, simply heat a large frying pan and cook the duck legs (or breasts) until the skin is nice and crispy, a benchmark of a good Duck Confit. You shouldn’t need to add oil to the pan as there should be plenty from the duck.

If you thought Duck Confit on its own would already exceed your week’s intake of calories, the dish is traditionally served with pommes de terre à la Sarladaise, which are slices of potatoes cooked in duck fat (thick coin-sized French fries). If you are going to indulge, you may as well do it properly.

Perhaps a more restrained way of eating Duck Confit is with a simple green salad dressed with a spikey vinaigrette to offset the richness of the duck. My mother-in-law simply serves boiled potatoes alongside.

But potatoes roasted in duck fat are my favourite accompaniment to Duck Confit. See here for my recipe for Crispy Roast Potatoes with step-by-step photos.

My favourite sauce to serve alongside Duck Confit is a homemade plum sauce, which I suppose is heavily influenced by my Asian upbringing. But it is also delicious with a homemade lingonberry jam.

Go for a brisk walk or a long jog the next day to offset the calories. Bon appétit! 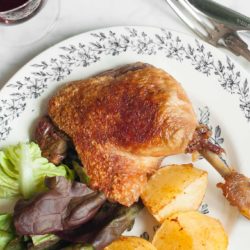 A classic French recipe for Duck Confit, or Confit de Canard, which are duck legs slowly cooked in duck fat until meltingly tender, and then pan fried until the skin is crispy and golden. Recipe with step-by-step photos.

To prepare the duck legs

To make the Duck Confit

To serve the Duck Confit

Duck legs work best in this recipe and I prefer to buy small duck legs which are easier to serve than large ones; large duck legs tend to be too big for one person. Duck breasts can also be used in this recipe, but they are not as commonly used.

Duck fat can be purchased from specialty stores or butchers. I buy them sold in glass jars in the refrigerated section.

Any leftover duck fat should be strained of any brown meat juices and kept in a sterilised glass jar in the fridge.

STORAGE TIPS
If you are not serving the Duck Confit right away, place the duck into a clean container, preferably made from glass or ceramic. Strain the leftover duck fat into a large bowl or jug, taking care not to catch any of the brown meat juices which should be discarded. Completely cover the duck with the strained duck fat, and leave to cool to room temperature. Cover the container and keep in the fridge for up to 1 month. Joël Robuchon gives further instructions to heat enough lard to cover the (set) duck fat by 1 to 2 cm as a method of keeping the confit for longer. Once the lard has set, press a piece of parchment paper onto the lard, completely cover the container and store in the fridge for 5-6 months.

This recipe was first published on 29 January 2014. It has been updated with new photos and more comprehensive recipe notes.