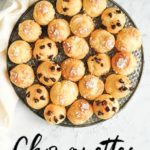 Something which I love to bake throughout the year are these little French cream puffs called chouquettes.

I have previously shared a recipe for Chocolate Chip Chouquettes by the wonderful and witty David Lebovitz.

But after seeing Rachel Khoo make her lovely chouquettes from The Little Paris Kitchen, I was inspired to try her take on a classic cream puff recipe.

Chouquettes are made from choux pastry, which is the same pastry used to make éclairs and profiteroles.

If you are from the US, you might be more familiar with the term “cream puffs” which are also made from choux pastry. Cream puffs are typically filled with whipped cream or pastry cream, the latter known as crème pâtissière or a thickened custard.

In French, cream puffs are called choux à la crème. Whenever we are in Paris (we are lucky to go quite often), I always like to visit La Maison du Chou for the most perfect little cream puffs which are filled to order with either fromage blanc, coffee pastry cream or chocolate pastry cream.

Cream puffs are similar to profiteroles, except that the French go one step further by serving the filled cream puffs with a drizzle of chocolate sauce.

Chouquettes are a simple affair as they are not filled with anything, but they are typically sprinkled with pearl sugar for a bit of sweetness. In America, I think they are sometimes described as “French pastry puffs”.

They are not as decadent as cream puffs, profiteroles or éclairs, which means that you can get away with eating more!

Most bakeries in France will sell freshly baked chouquettes which are great for snacking on, or for serving for afternoon tea (called goûter in French).

The chouquettes recipe below is one which I have adapted from my recipe for Profiteroles with Chocolate Sauce. I love that Rachel Khoo uses chocolate chips to decorate the chouquettes, which I think is a lovely alternative to the pearl sugar which is more commonly sold by the French bakeries.

Pearl sugar is a popular ingredient used in many baking recipes in Europe, especially in the Scandinavian countries. What is special about pearl sugar is that the sugar pieces retain their shape upon baking, and therefore add a lovely sweet crunch.

How to Make Choux Pastry

Choux pastry can be very easy to make, once you get the hang of it.

You start by melting the butter, water and salt together in a saucepan. Then you add the flour to turn the mixture into a dough, before adding the eggs one at a time.

For the latter step, I prefer to use an electric stand mixer, mostly because beating in the eggs requires quite a bit of muscle power, and if you have an appliance which you can help you on that front, you may as well use it!

The goal with choux pastry is to end up with a pastry which is thick and smooth, and which can hold its shape when you pipe it.

How to Make Chouquettes

To turn the choux pastry into chouquettes, simply pipe small rounds of choux pastry onto a baking tray, and sprinkle with pearl sugar and/or chocolate chips (or both!).

Once you have tried making chouquettes, you will find that it is a relatively quick and easy way to make a simple dessert which can feed a crowd, plus it is made using very basic and economical ingredients.

My children love these chouquettes so much that it is hard to make them stop! But given that the sugar content is relatively low, I don’t mind too much.

Although this recipe makes about 40 small chouquettes, I promise that you won’t have any trouble finishing them!

If you are looking for choux pastry recipes, you might also enjoy: 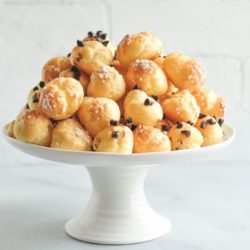 USING PEARL SUGAR
Pearl sugar is commonly used in breads and pastries in Europe and is generally widely available in continental Europe. For all other countries, check your local specialty stores. Some Ikea stores also stock pearl sugar. If you can’t find pearl sugar, crushed white sugar cubes will create a similar effect.

STORAGE TIPS
These chouquettes are best eaten on the same day they are made when they are still crispy. If you have some leftover chouquettes, you can warm them up in the oven for a few minutes to become crispy again.

This recipe was first published on 13 August 2014. It has been updated with new photos and more comprehensive recipe notes.