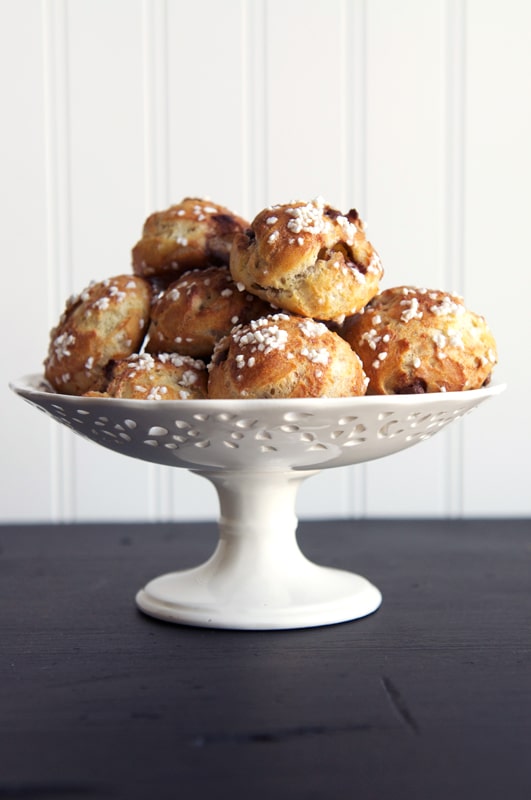 While working in the outer suburbs of Chicago in the last few years, I often found myself at a Barnes & Noble or Borders bookstore during lunch, not only because I have a fondness for bookshops but mostly because I discovered that living and working in Switzerland had had a big influence on my lunch-time eating habits.

Unlike the Australians and Americans who often grab a quick sandwich or heat up leftovers to eat at their desk, the Swiss tend towards a leisurely a 2-3 course hot lunch, followed by a customary coffee before heading back to their desks once their lunch hour (or two) is up. This is not to say that the Swiss are dwindling away their time during office hours; lunch breaks are mandatory by law and most people often use their hour for business chit-chat or networking, and enjoy a good meal in the process. It is also commonplace to lunch with your colleagues at the work canteen, so it is a culture which fosters social interaction amongst employees, even if you might only end up talking about work or engaging in polite chatter over your meal. I have to admit that I enjoy the Swiss approach to lunching and one often feels that the lunch break was in fact a break.

But as a visitor to the offices in the US, lunch was often a lonely experience for me. Several colleagues often went out of their way to lunch with me now and then, but I got the feeling early on that most tended to work through their lunch hours, that anything more than 15 minutes was only reserved for the odd occasion, like when a visiting colleague was in town. But as I often worked in the US for about a month at a time, I couldn’t expect a leisurely lunch everyday. Yet it didn’t feel right to sit in front of my computer with a styrofoam cup of soup and a plastic spoon when I was so used to sitting down to a proper meal with proper cutlery (or, as they say in the US, silverware). So on those days when I found myself alone at lunch, I would hop into the car and drive to one of the many malls nearby for some amusement. I didn’t mind so much hanging out on my own as it was rather an adventure to explore the mid-west while working there. And so I often found myself at a bookshop where I would grab a quick snack at their in-store coffee shop, and flick through books which I would never find back in Zurich, like the complete Paula Deen collection. Or the rather unusual semi-homemade offers by Sandra Lee. I must confess to having a soft spot for American cooking. 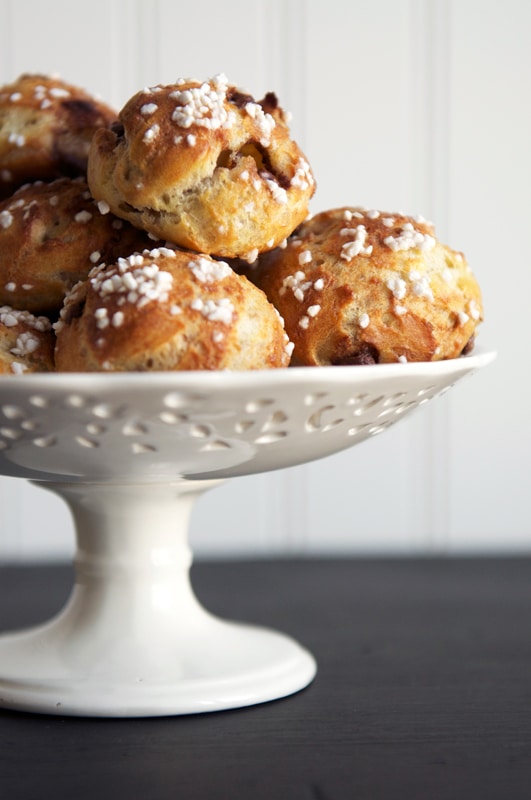 One American writer who I love, though not just for his American recipes, is David Lebovitz. As a faithful follower of his blog for some years, I absolutely adore his wit and sense of humour and love reading about his adventures of living and cooking in Paris. So when I saw a copy of his book, The Sweet Life in Paris, I knew that it would be a good book to keep me company, not least on the flight back home.

The Sweet Life in Paris is a humourous account of David Lebovitz’s move to the City of Light, with lots of insightful tips (or are they warnings?) for anyone who might want to visit or perhaps move to Paris, from the appropriate attire to wear when going downstairs to take out your garbage, on how to persuade the employees at the immigration office to renew your visa, to the ever-important etiquette of working your way around a cheese platter.

Many times throughout the book, I had to stop and wonder if Lebovitz was writing about Paris or Zurich. There were many chapters where the similarities made me chuckle out loud and one particular chapter was where he was talking about les bousculeurs, people who bump into you and try to knock you over as they compete for your spot on the footpath. His description of les bousculeurs in Paris is exactly my experience of Paris, but also London, New York and … Zurich. 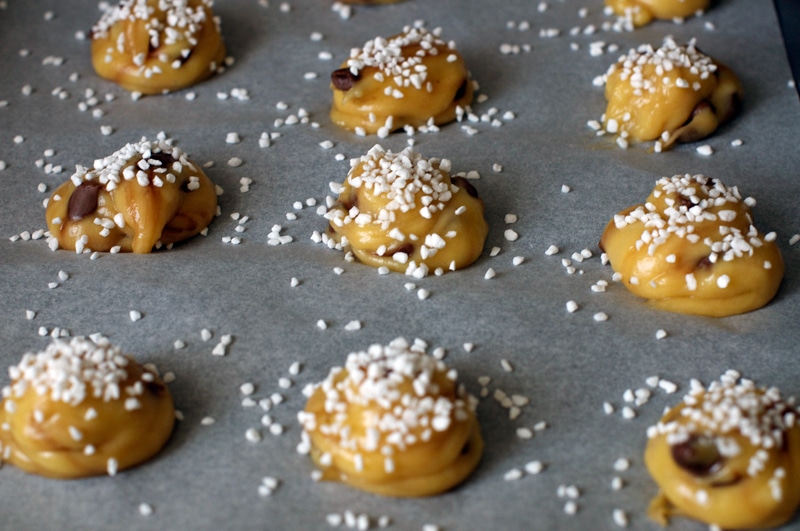 Despite being a much smaller city than Paris, Zurich can feel surprisingly crowded at times, not from people who rudely brush your shoulders from different directions, but from people who are unaware of the concept of personal space. It is not uncommon to be standing at the tram stop, alone with not another soul in sight for miles, when suddenly another person will appear and decide that they want to stand in exactly the same spot where you are, prompting you to shuffle a few footsteps sideways or simply move elsewhere as they position themselves. Worse is when they decide to stand directly behind you, so intimately close that they may as well give you a bear hug.

There have been many occasions at the supermarket when I have stood in front of the shelves, my arm out-stretched as I run my fingers along the various choices presented before me. Yet a Swiss is likely to interpret that space between my nose and the shelf as more than sufficient for them to step into, oblivious to the fact that I was trying to look at the same product which they are now standing in front of. The first time this happened, I was shocked by such rudeness. The second time, I wondered if I was invisible. By the third time, I had learnt enough Swiss German to politely tell them off.

While Lebovitz offers an explanation for why the Parisians behave like moving atoms, it is a baffling mystery why the Swiss insist on standing so close to strangers when space is not an issue in Zurich (best described as a small village when compared to Paris) and no one here is in a hurry to get anywhere (the public transport system is so efficient that one doesn’t have a good excuse to be late). 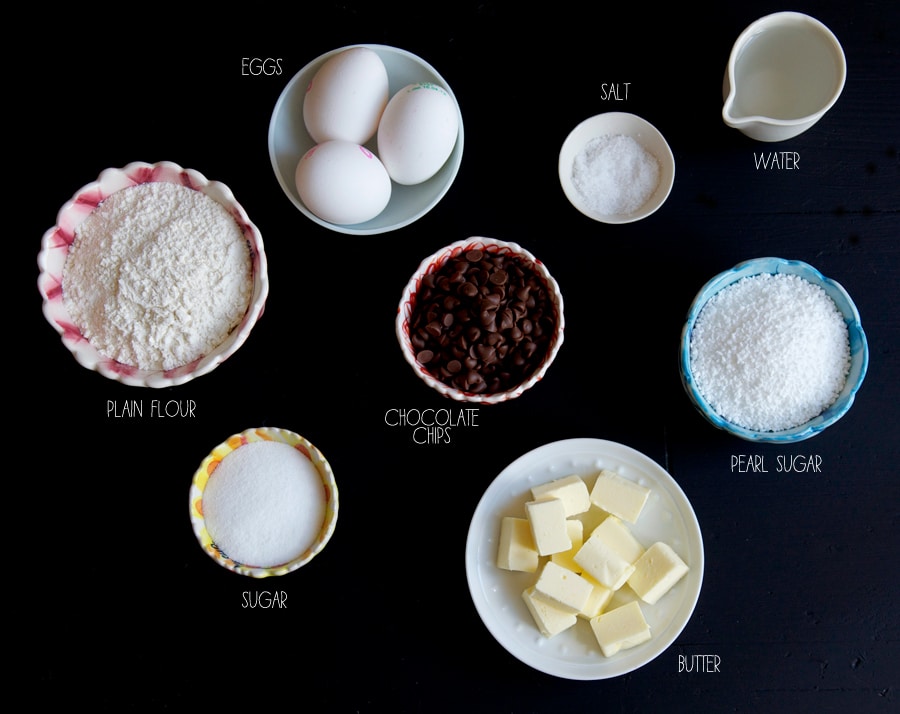 I am always impartial to a book which is dotted with recipes throughout, and David’s recipes at the end of each chapter often had me hungry by the start of the next chapter. One recipe which I was especially excited to try were his Chocolate Chip Cream Puffs. The name alone suggested something heavenly to me, but upon reading the list of ingredients and the instructions, I realised that there was no cream … I’m guessing that Americans must call profiteroles cream puffs, even in the absence of a cream filling. In the world of French pâtisserie, a profiterole without a filling is called a chouquette, both being made from the same choux pastry. Despite the brief confusion, I was still won over by the recipe, particularly since I had never tried a chouquette with chocolate chips. I figured that it could only taste good.

Good? These Chocolate Chip Chouquettes were absolutely delicious!!! The idea of making choux pastry might sound daunting to some, but it is fairly quick and easy to make, and you would be almost halfway from making the most delicious dessert, Profiteroles. But these chouquettes are the easy, no-fuss alternative for a quick snack. 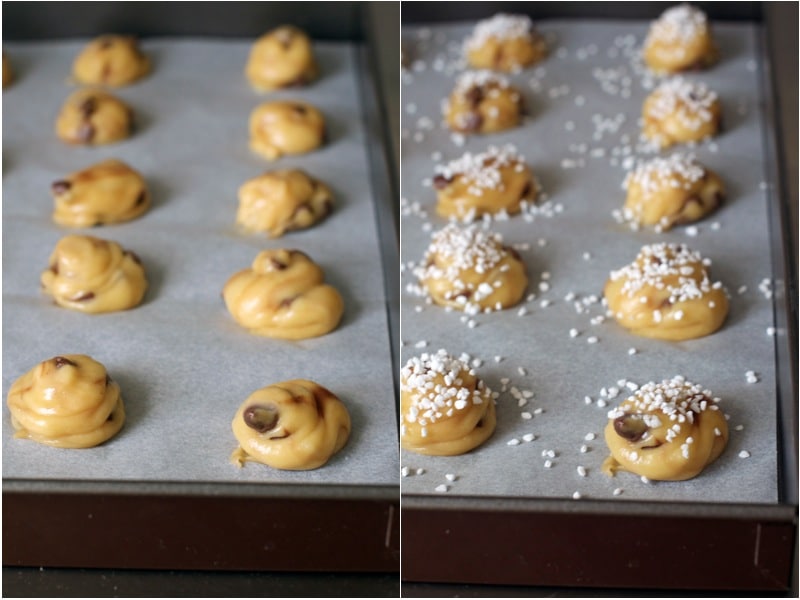 I followed Lebovitz’s recipe pretty closely but I am always for making life easier in the kitchen, so I used my KitchenAid to do most of the heavy work in making the choux pastry. I also used a piping bag to make smallish chouquettes which only required 13-15 minutes in the oven. My pearl sugar must also be much smaller than what Lebovitz uses; he describes pearl sugar as being roughly the size of small peas but the pearl sugar which I use (Hagelzucker in German or sucre en grains in French) is much smaller and finer. Pearl sugar is essentially small chunks of sugar which are great for sprinkling over breads, brioches and biscuits as they do not melt in the oven. They are quite popular in Scandinavian cooking so you might find some at your local Ikea store.

Lebovitz also gives the handy advice of waiting for the dough to cool down completely before stirring through the chocolate chips, otherwise they will melt at the slightest hint of heat. I did as instructed, and even though I thought the dough had cooled down sufficiently, I was wrong as some of the chocolate chips started to melt as I was stirring them through. Not a disaster but it does change the colour of the dough a little.

A chocolate-studded chouquette sprinkled with pearl sugar makes for a lovely and addictive afternoon treat. I can’t wait to make these again! 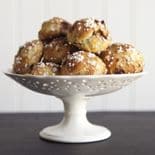