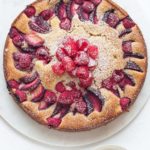 A delicious recipe for Butter Cake with Peaches and Raspberries, with step-by-step photos. Plus a review of The Cook’s Atelier cookbook. 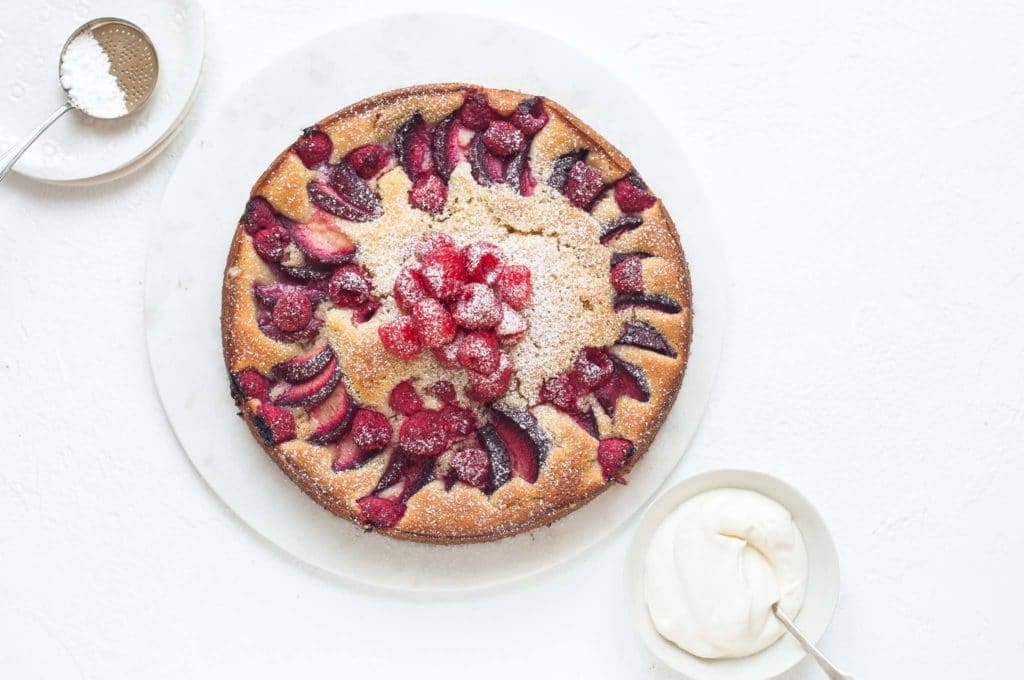 I received a copy of The Cook’s Atelier cookbook to review, complimentary from the publisher, but the content, opinions, and photos below, are my own.

My husband’s family live in the far north-western corner of France in a region called Brittany. In summer, we often make the long journey by car from Zurich, a trip which takes us through the scenic Loire Valley with its romantic vineyards and impressive castles.

But before we reach the Loire Valley, we first pass through the picturesque Burgundy region and frequently make our first overnight stopover in the little town of Beaune. 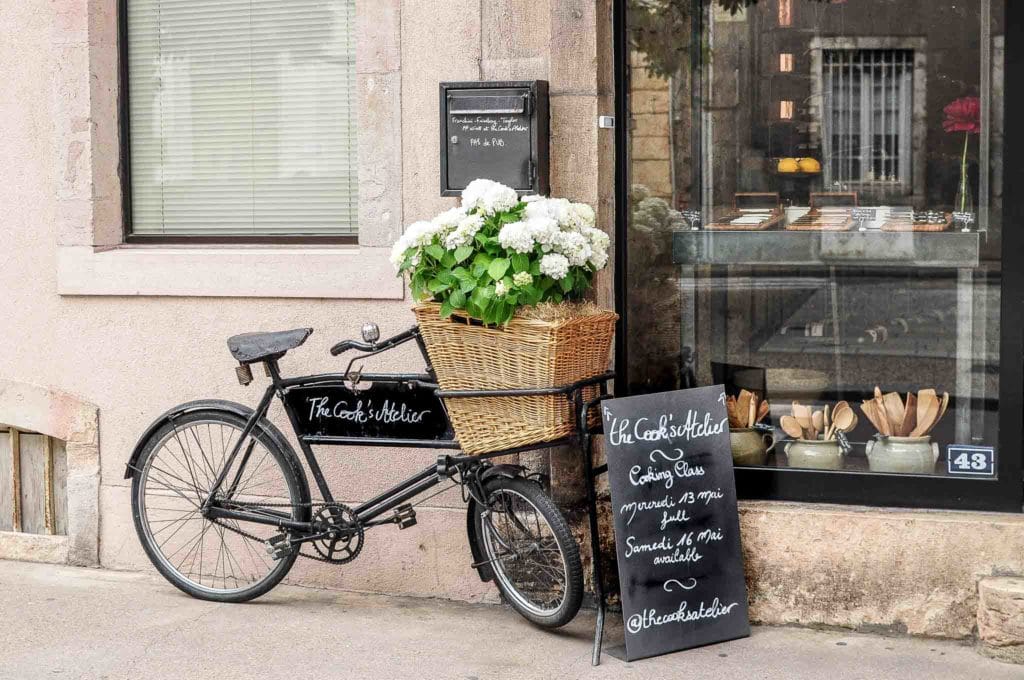 It was in Beaune some years ago that I came across the The Cook’s Atelier, a delightful kitchenware store which had me exceeding my shopping budget before we had even arrived at our destination.

Madeleine tins, balloon whisks, French rolling pins, vintage wooden boards … you are unlikely to leave empty-handed. And if your suitcase and credit card limit will allow, The Cook’s Atelier also sell their own line of copper pans from Mauviel, as well as an envious selection of wine. 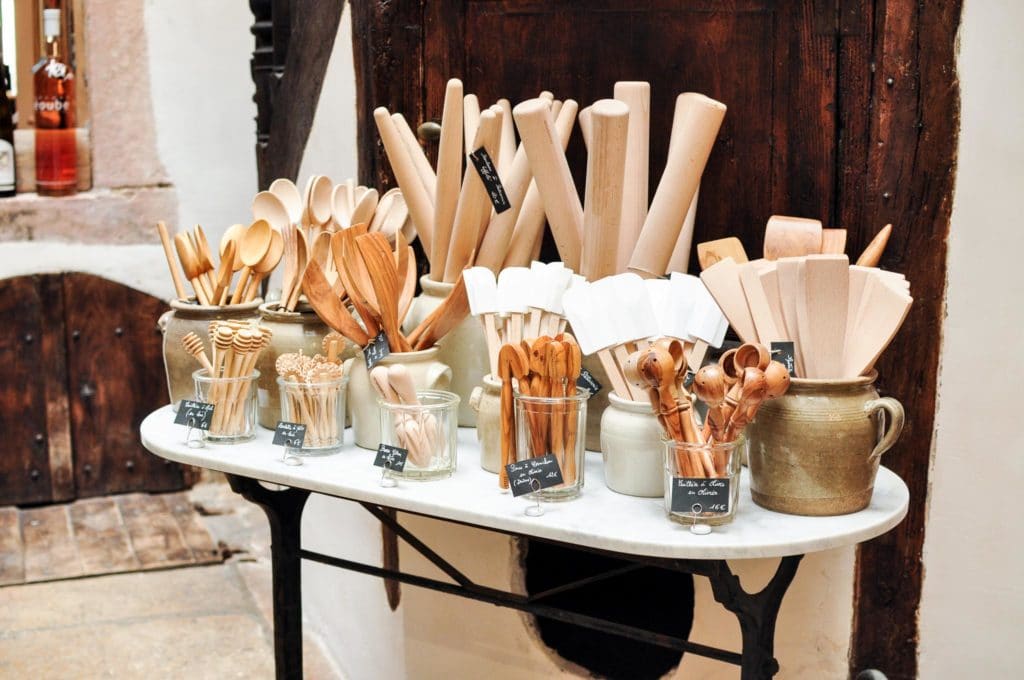 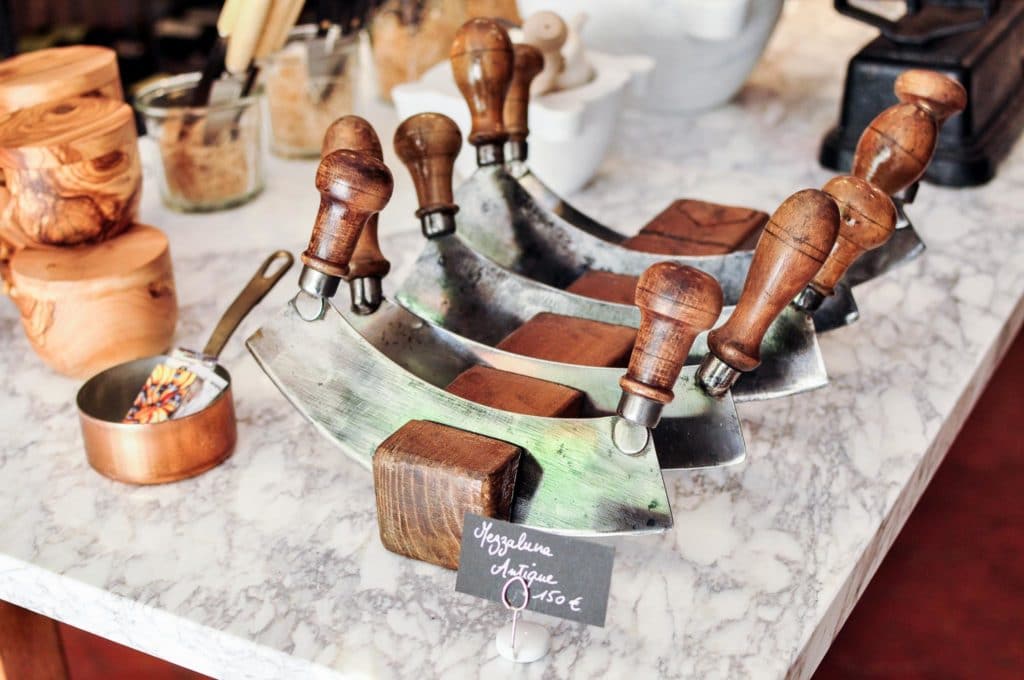 The Cook’s Atelier is owned and run by Marjorie Taylor and Kendall Smith Franchini, a mother-daughter duo from the United States who had always dreamed of living in France.

However, The Cook’s Atelier is not just a culinary boutique; their French cooking classes attract visitors from near and far, and their 5-day workshop has been on my wish-list for the longest time! 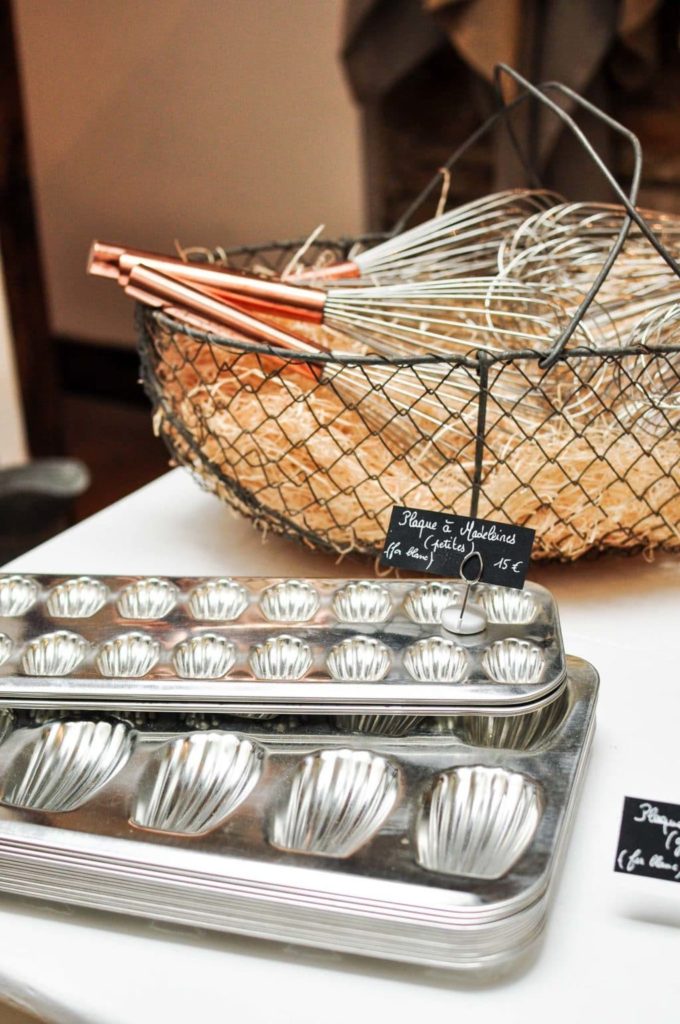 The Cook’s Atelier recently released their own cookbook and, although I probably already own most French cookbook titles out there, there is something about a beautifully photographed cookbook which makes me forget that I already have too many recipes for Croque Madame.

It is a hefty book with lots of timeless French recipes, carefully organised by the seasons and with lots of practical advice.

When I first received the book, I skipped straight to the summer chapter and their Butter Cake with Peaches and Raspberries immediately caught my eye. 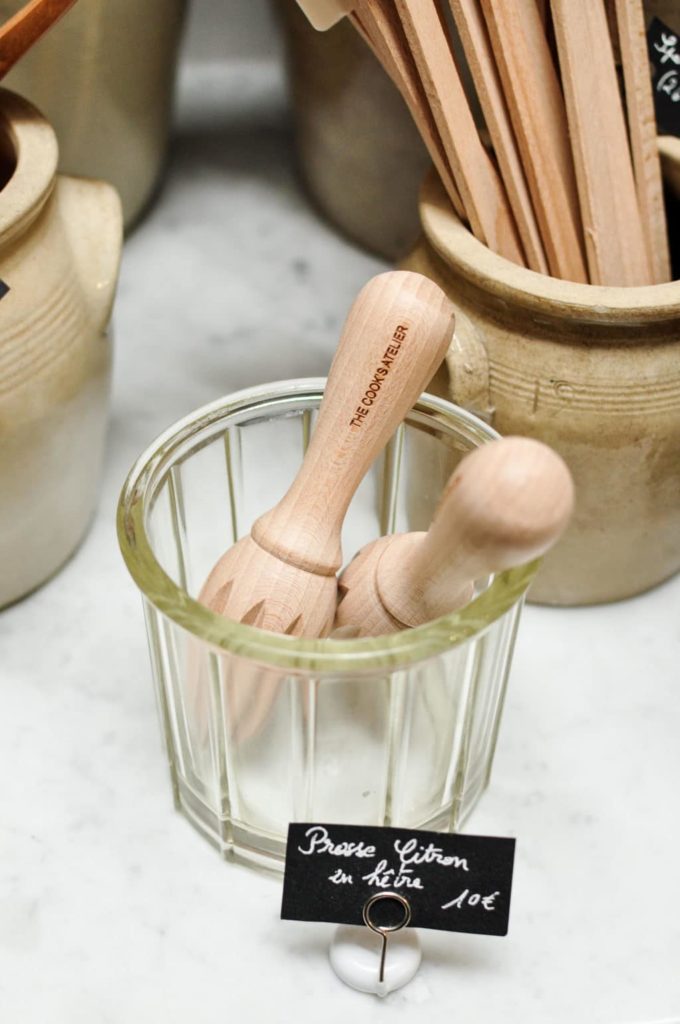 A really good and simple cake recipe to have up your sleeve is one for butter cake.

Although it is called a “butter cake”, it is actually not rich in butter like, say, a pound cake. A butter cake is essentially a plain, vanilla cake which can be made unadorned to highlight the simple ingredients.

But this butter cake recipe lends itself really well to the addition of fruits, and you can add almost whatever fruits you like, depending on what is in season. 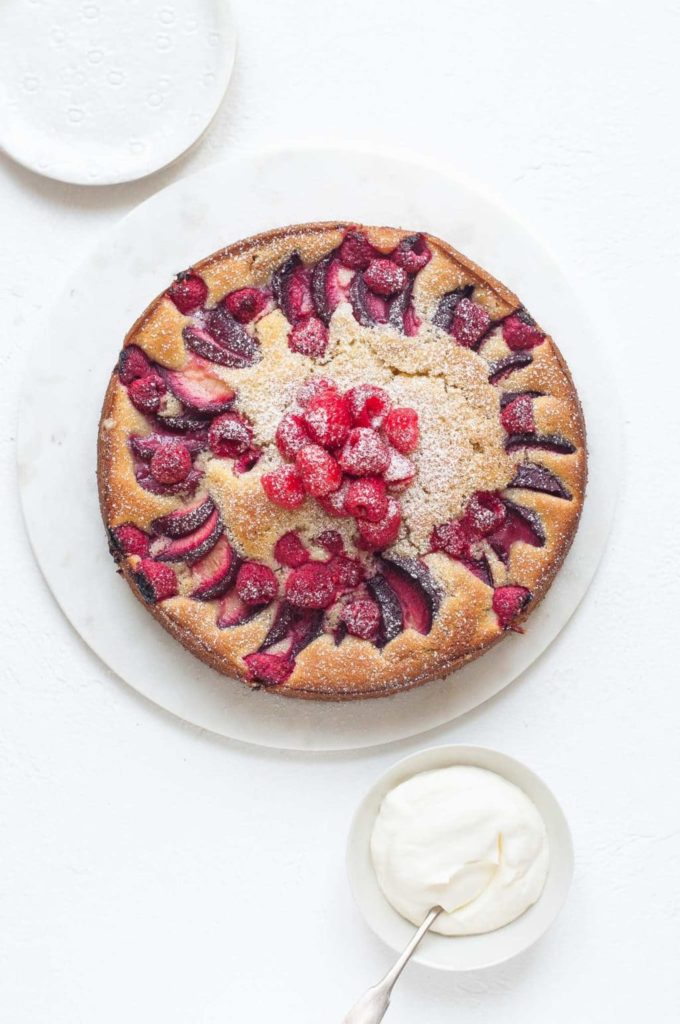 This butter cake recipe comes from The Cook’s Atelier cookbook. I have adapted it slightly so that I can make it with my KitchenAid, and the main change I made was to use special blood peaches in place of normal yellow peaches.

I unwittingly bought these red peaches at the farmers’ market one day and was immediately taken by their ruby redness and subtle sweetness. I have since been trying to make the most of their limited season, which is generally in the month of August in the northern hemisphere.

These red peaches come from France and their variety is called Pêche de Vigne (or  Weinbergpfirsich in German). When halved, they have the lovely flesh of white peaches but with a brilliant red wine stain on the outside. The Pêche de Vigne have the sweetness of normal peaches, but with the slight tartness of raspberries.

Ordinarily, I would not cook with such (expensive) limited edition fruits because they should really be enjoyed eaten simply as they are.

But I went a bit overboard with my fruit purchases this week, an unwise move considering that we are going away in a few days. But as I had my eye on this butter cake recipe, I thought it wouldn’t hurt to try it with a few blood peaches. And the result was amazing! 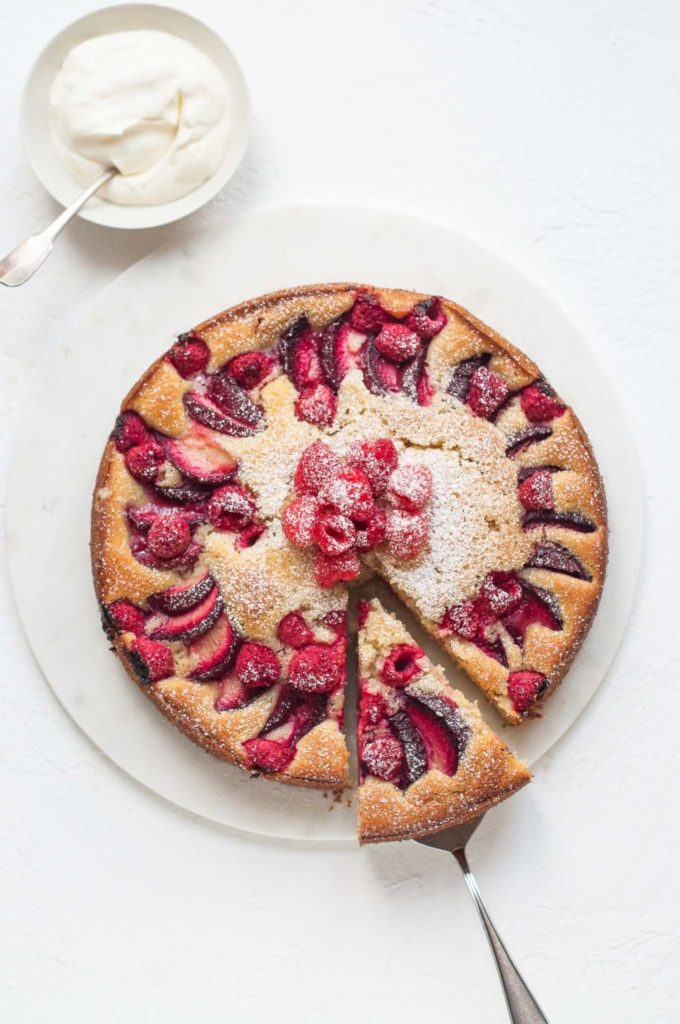 How to Make a Butter Cake

This is an easy and simple butter cake recipe, more so because I use my KitchenAid to do all of the mixing.

What I love about this recipe is the use of crème fraîche which gives the cake a soft and moist texture.

You can make the cake plain and serve it simply with a dusting of icing sugar, or add some seasonal fruits to make it a bit different each time. Some suggestions include:
* peaches, thinly sliced
* nectarines, thinly sliced
* plums, thinly sliced
* apricots, halved
* raspberries
* blueberries
* mixed berries
* rhubarb, sliced into short lengths like in this cake

You could even stir chocolate chips through this batter for a chocolate-chip cake! 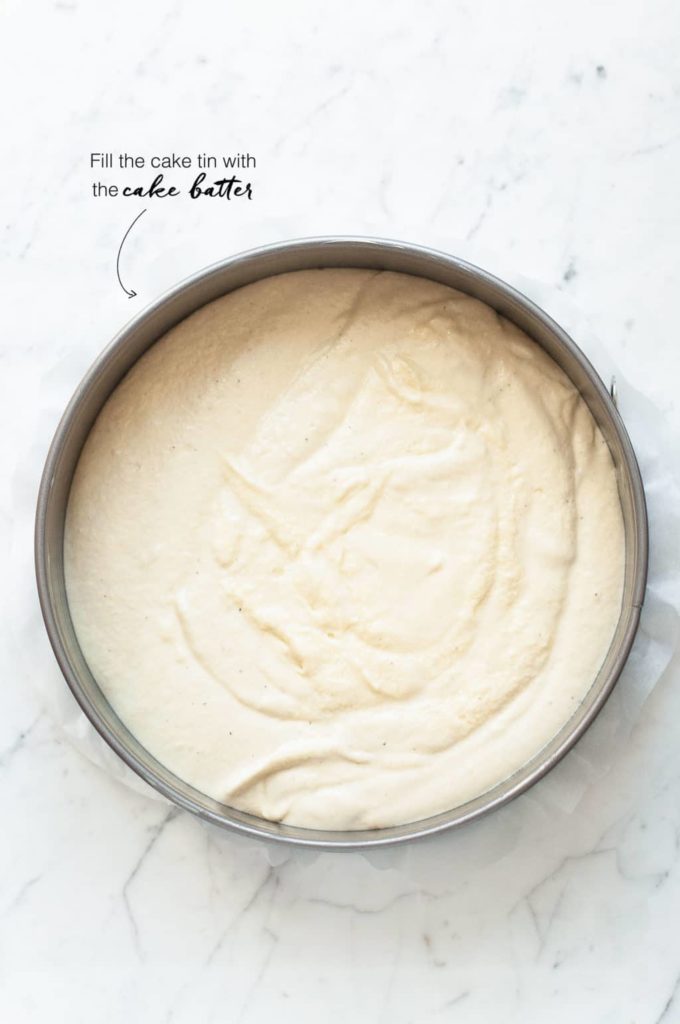 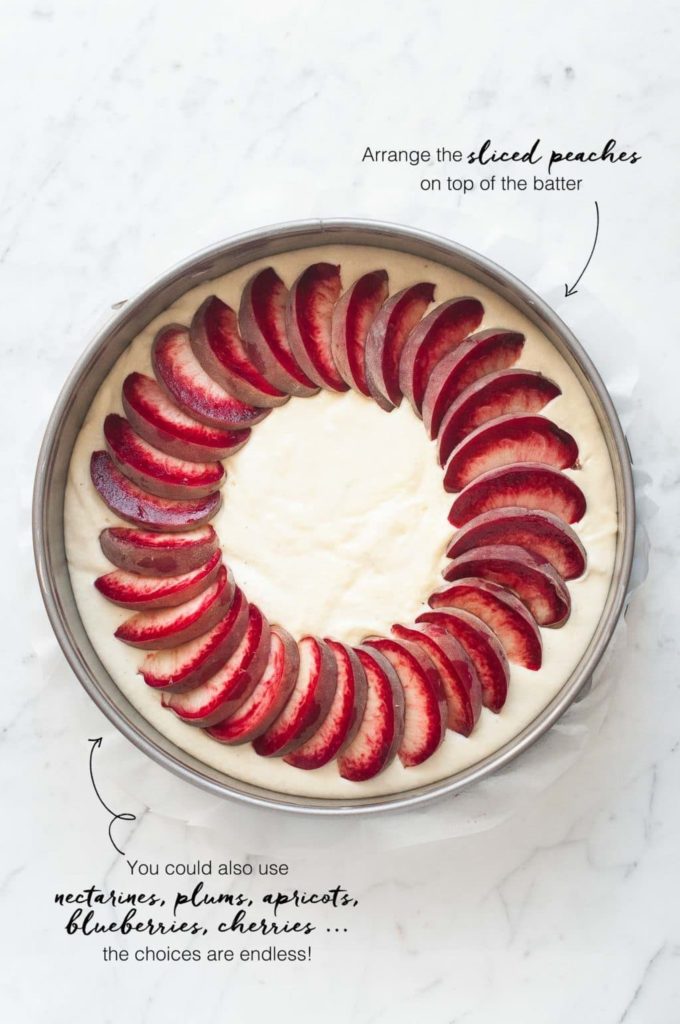 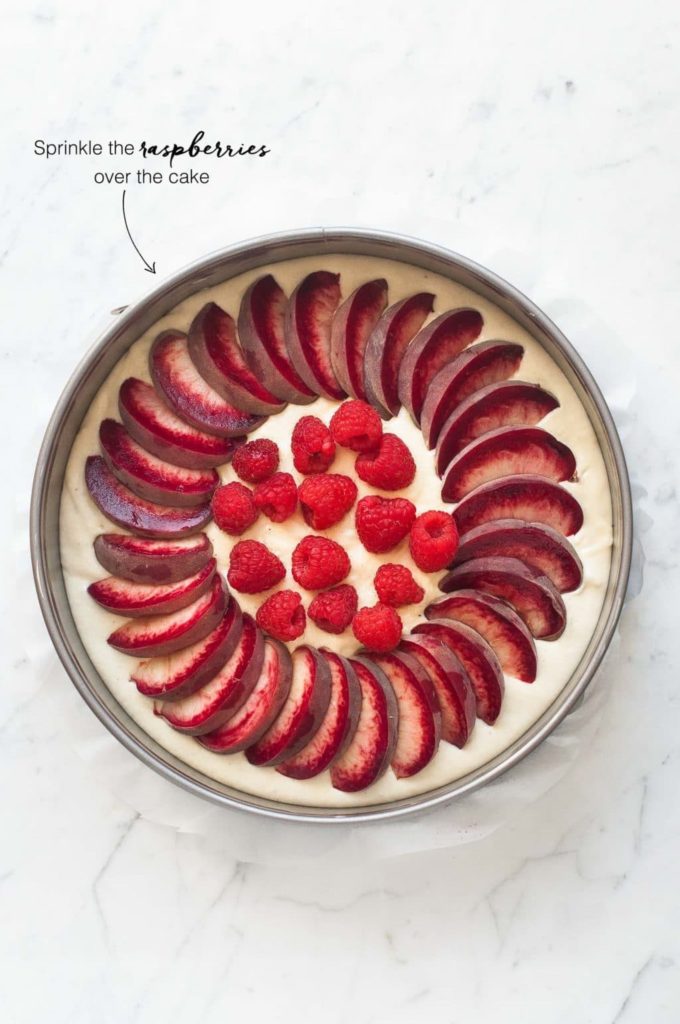 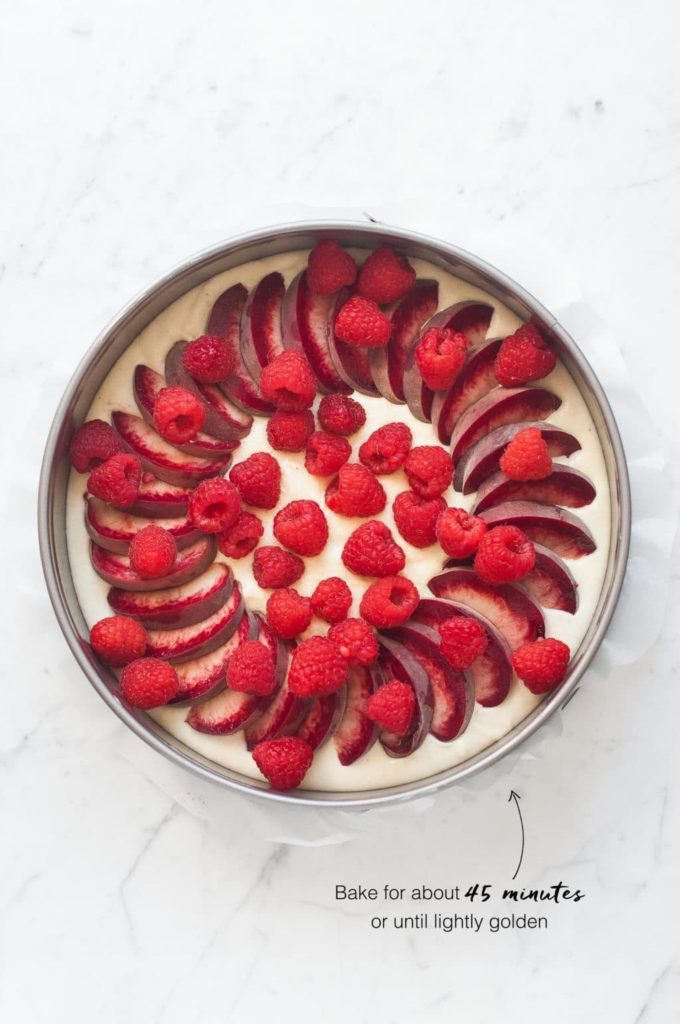 Win a Copy of The Cook’s Atelier Cookbook!

Thanks to the lovely people at ABRAMS, you can win a copy of the The Cook’s Atelier cookbook!

It is a stunning cookbook with over 100 recipes, beautifully photographed by Anson Smart, an Australian photographer who is well-known for his work in Donna Hay and Gourmet Traveller magazines.

This giveaway is available only to participants in Europe.

To enter, simply leave a comment below and tell me: what is your favourite French cake, dessert or pastry?

Entries will close on Friday, 14 September 2018. The winner will be announced shortly thereafter.

**UPDATE: The giveaway is now closed and the winner has been notified by email. Thank you to everyone who entered!** 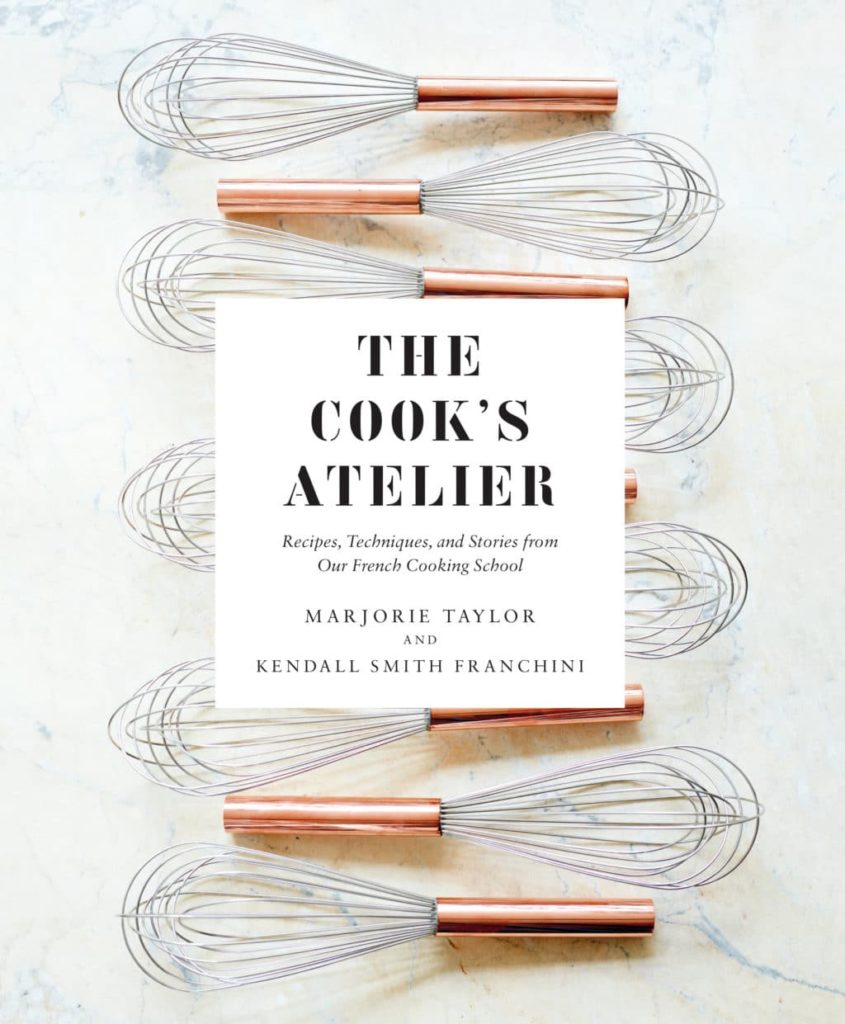 Butter Cake with Peaches and Raspberries 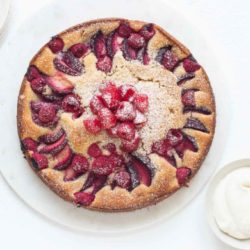 A delicious recipe for Butter Cake with Peaches and Raspberries, with step-by-step photos. Recipe adapted from The Cook’s Atelier by Marjorie Taylor and Kendall Smith Franchini.

To make vanilla sugar, simply place a split vanilla bean into a clean glass jar, and fill it with caster sugar. Leave it for at least a few days for the vanilla to infuse the sugar. You can keep adding  vanilla beans to the sugar over time to intensify the aroma.