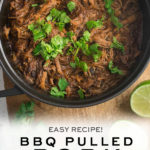 We have a good friend who, every summer, invites everyone over for a pulled pork feast. The pork is attentively prepared over several days and served with a homemade spicy barbecue sauce with all the fixins, including homemade tortilla bread.

His pulled pork is so delicious that, until recently, I never attempted to make it myself – I simply waited for his invitation!

But with winter recently upon us, as well as the need for social distancing due to a certain virus terrorising us, I felt the need to make something comforting, and something which could see us through many meals. Enter pulled pork.

What is Pulled Pork?

Pulled pork is a dish where the pork has been slow-cooked until it is meltingly tender and falls apart easily. You should be able to use a fork to “pull” the pork apart easily.

Why This Pulled Pork Recipe Works

I played around with several pulled pork recipes and quickly realised that pulled pork is one dish on its own, whilst BBQ Pulled Pork is pulled pork mixed with barbecue sauce.

For a BBQ Pulled Pork, it makes sense to use a barbecue sauce which you like. You could easily use a shop-bought barbecue sauce, but making your own is super easy.

I like to make my own barbecue sauce so that I can adjust the flavourings to my liking. With a homemade barbecue sauce, you can also reduce the sugar content a lot compared to the shop-bought variety.

Another advantage is that you can also add additional spices, such as chilli powder or chipotle chilli powder, for some extra kick.

How to Make Pulled Pork

To make pulled pork, you need a cut of meat which is suitable for slow-cooking or braising. Pork shoulder is the cut which is often recommended in most recipes for pulled pork.

You should buy the pork shoulder in one piece, but it is also fine if you cut the meat into several large pieces.

Marinate the meat in a dry rub, preferably overnight so that the meat can take on some of the flavours. But if you are in a hurry and plan to make pulled pork using the pressure cooker or Instant Pot, you can skip the overnight marinating time.

Once you are ready to cook, use an oven-proof pan which will fit the meat snugly. You don’t want to use a pan which is too large, otherwise the meat can dry out during the cooking phase. I like to use a Le Creuset Dutch oven.

I like to make pulled pork by slow-cooking it in the oven, but I have also tried it using the pressure cooker, and the results are equally delicious.

So if you are pushed for time, you can make pulled pork in about 1 hour!

What to Serve with BBQ Pulled Pork

Some of my favourite ways of serving BBQ Pulled Pork include:

Some of my favourite sides and toppings for BBQ Pulled Pork include: 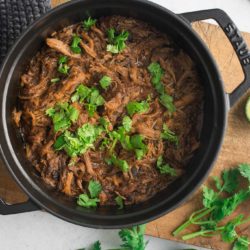 For the Spice Rub

For the Pulled Pork

For the Barbecue Sauce

For the Pulled Pork

For the Barbecue Sauce

INSTRUCTIONS FOR PRESSURE COOKER OR INSTANT POT
Follow the instructions as above, and cook using the manufacturer’s instructions on high pressure for 50 to 60 minutes with a slow release.

INSTRUCTIONS FOR SLOW COOKER
Follow the instructions as above, and then transfer the cooked onions and browned meat to the slow cooker. Add the chicken stock. Cover and cook on low heat for 8 to 9 hours, or until the pork is meltingly tender.

LEFTOVERS
This recipe makes more pulled pork than you will need for one meal. Any leftovers can be kept in the fridge in a covered container for a few days.