Tasty and succulent Vietnamese Grilled Pork Chops, with a simple marinade to give maximum flavour. 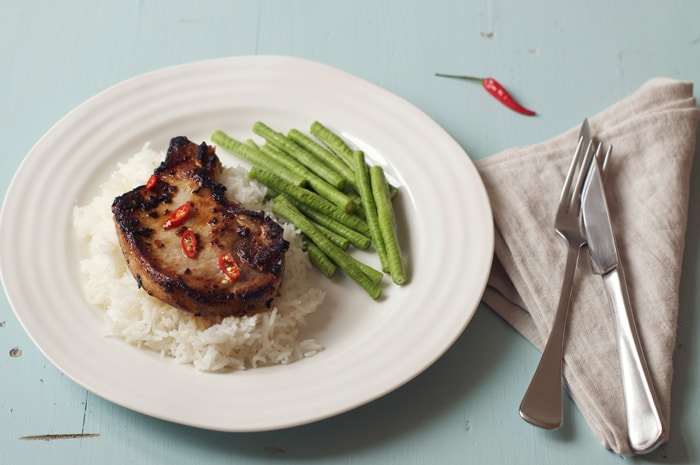 The Vietnamese have a popular dish called sườn nướng where the main component is a pork chop which is typically marinated with garlic, lemongrass and fish sauce. The pork is either grilled or pan-fried until it is golden in colour and caramelised, and served on a bed of plain Jasmine rice with accompaniments such as pickled carrots and daikon, fresh cucumber and tomatoes, and some traditional Vietnamese specialities such as finely shredded pork belly and a steamed pork and egg custard. And if you’re really hungry, you could also order this dish with a fried egg on top, sunny-side up. Some restaurants even offer a small bowl of clear soup on the side to make this truly a complete and satisfying meal.

Nearly all Vietnamese restaurants have this dish on the menu or some variation of it. It is a dish worth ordering in restaurants because you would probably otherwise exhaust yourself at home trying to get all of the components on the dish.

At home, my mum frequently made the pork chops which was simply served with plain Jasmine rice and maybe a simple salad on the side. She always had a bottle of homemade nước chấm (Vietnamese dipping sauce) in the fridge and we would drizzle this sauce over the pork and rice before eating. 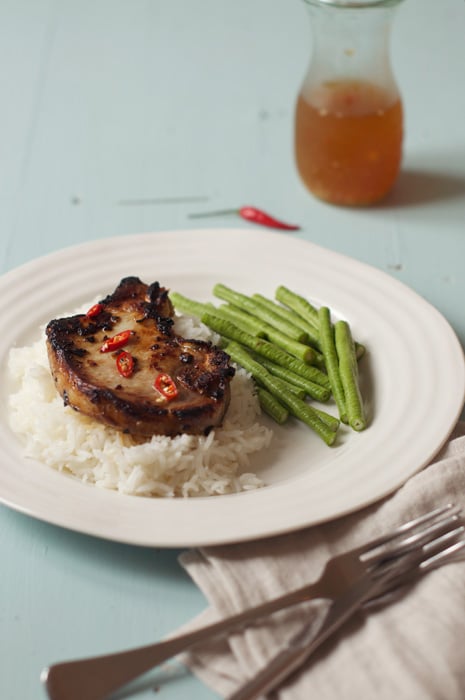 I particularly love the pork and egg custard that is often served with this dish in restaurants and so does my mum, so we are often disappointed if some restaurants simply don’t offer it or it is not made to our expectations (not that we are connaiseurs but we have tried this savoury custard in many restaurants to know what is good and what is not). I love to make this pork and egg custard at home when time permits, although, these days, it is precisely time which seems to be always lacking.

I like to make these pork chops the way my mum does, which is to marinate it overnight with garlic, lemongrass, fish sauce, sugar and sesame oil. Lemongrass can be sometimes hard to find in Zurich (let alone when I am working in the suburbs of Illinois) so I sometimes leave it out, but then I often regret doing so because its fragrant and citrusy flavour is so fundamental to a lot of Vietnamese dishes.

So it was with some hesitation that I tried Bill Granger’s recipe because of the missing key ingredient, but I was rather open-minded about the experiment, in the same way that I was when I tried his recipe for Chicken Curry Soup. Bill’s marinade calls for only garlic, sugar and fish sauce. And he suggests marinating the meat for only 15 minutes. Of course, the meat will be more flavourful the longer you marinate it, but 15 minutes seems to be sufficient, during which time you can put the rice cooker on and prepare a light salad. I found the simple marinade gave a nice flavour to the meat and, if you have time to make some nouc cham to serve as a light dressing over the meat and rice, you would have yourself a delicious meal, Vietnamese-style.

I tried this recipe during a busy working week when I didn’t have time to go the Asian grocer and had to make do with ingredients I could find from the normal supermarket on the way home from work. It was amazingly quick to prepare and, yet again, I was grateful to have found a short-cut recipe for a traditional favourite. Of course, if I had more time during the week, I think I would prefer to go the extra distance and make my usual marinade and let the meat marinate overnight. But given the busy past few weeks (or has it been months??) where even boiling pasta has felt time-consuming, it’s good to know that there are some short-cuts which are worthwhile taking. 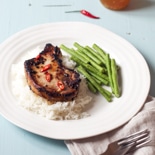 Tasty and succulent Vietnamese Grilled Pork Chops, with a simple marinade to give maximum flavour.

VIETNAMESE DIPPING SAUCE (NUOC CHAM)
To make nuoc cham, Bill Granger’s recipe is to dissolve 1 tablespoon of caster sugar in 3 tablespoons of lime juice and 2 tablespoons of fish sauce. Add 1 finely chopped clove of garlic and some chopped red chillies. The sauce keeps well in the fridge for a few days.