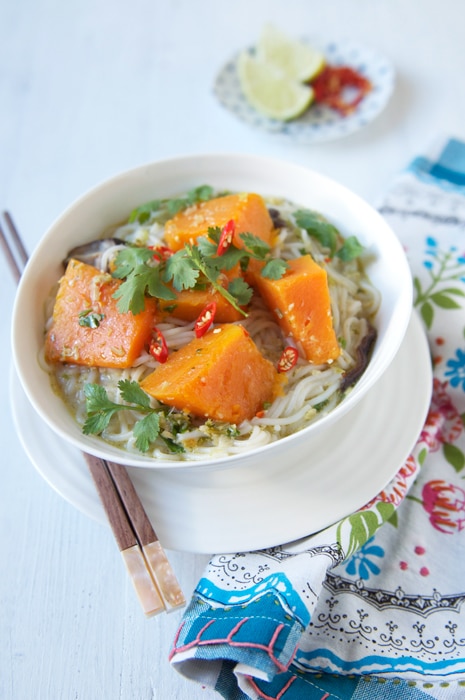 I have long been a fan of Nigel Slater, his books having been instrumental in my initial forays into the kitchen, along with Nigella Lawson and, dare I say it, the Australian Women’s Weekly. One of my favourite cookbooks would have to be Appetite, a hefty book filled with amazingly delicious recipes but provided in a manner that encourages the cook to develop some intuition in the kitchen. Rather than call for, say, 100 g of tomatoes, Nigel Slater’s recipes would instead ask for 3-4 medium-sized tomatoes, not only making it a bit easier to shop but also allowing the cook some flexibility.

I have been distracted in recent years by cookbooks from other authors, but this year hopefully marks a revisit of some old favourites. I was only reminded of Nigel Slater recently when hubby and I were browsing in the bookshop and Nigel Slater’s Tender Volume 1 & 2 were being sold together in a limited edition boxed set. Having lusted after these books for some time but trying to sensibly refrain from hoarding too many cookbooks in one year, I couldn’t resist a boxed set. And upon realising that Volume 1 was all about vegetables, and Volume 2 was dedicated to fruit, hubby generously offered the books to me as a gift, on the condition that they supported his New Year’s resolutions to eat more vegetarian and healthy food. Of course, honey …

With pumpkins in season, I was instantly taken by Nigel’s recipe for pumpkin laksa in Tender Volume 1. As a lover of all noodle soups, from the robust and herbal hit of a Vietnamese Pho to the equally comforting but milder-flavoured chicken noodle soup of the western palate, and not to mention the 2-minute noodles (or pot noodles) of my student days, I can rarely turn down a recipe for comfort in a bowl. 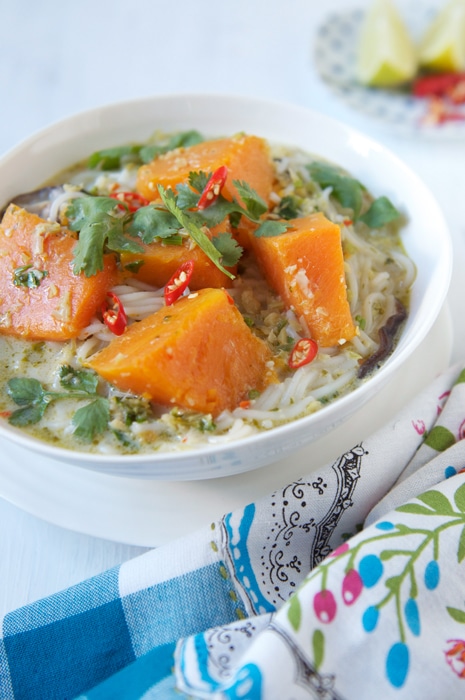 A typical laksa consists of a hot broth flavoured with curry spices and coconut milk, ladled over a nest of thick vermicelli noodles with either chicken or prawns (or both), some deep-fried tofu puffs, sprinkled with some crunchy bean sprouts and a generous garnish of fresh herbs. So anyone who may have sampled as many laksas as I have might disagree with the name of Nigel Slater’s soup. His soup is not the fiery and aromatic red broth typically served in Malaysian restaurants, but since I can’t remember when I had last slurped my way through a hearty bowl of laksa, nor pinpoint its taste in my memory, I don’t think I am in a position to comment.

But whatever you wish to call this soup, it is pretty delicious. It is not unlike Rachel Allen’s Fragrant Sugar Snap and Beansprout Noodle Laksa from her book, Home Cooking. Both recipes use the same ingredients in the spice paste and the soup, albeit in differing quantities. The spice paste is quick and easy to make and provides a fragrant and spicy base for the soup. You could add any vegetable of your choice – mushrooms, baby corn, snap peas, beans, bok choy, etc – or even slices of raw chicken for a chicken noodle laksa.

Nigel’s suggestion is to add steamed pumpkin which, in the absence of meat, makes this soup quite hearty and filling. The pumpkin also lends a nice sweetness to the soup, a welcome flavour against the gentle spiceness. Next time, I might try to cook the pumpkin in the spicy broth so that the pumpkin can take on some of the flavours of the soup, and also to save on some washing up. That said, it was rather nice to bite into the untampered pumpkin for a mild contrast in taste against all of the other flavours.

But I was rather perplexed to look at the pan of simmering broth and accept that it was enough for 4. Nigel’s recipe makes about 1 litre of broth and calls for 25 g of noodles per person. I don’t know about you but I would have gone to bed hungry if I was indeed making this recipe for 4. I found the soup to be a little concentrated for my taste and added an extra 300 ml or so of water until I was happy with the balance. I cooked 300 g of noodles and found that, with the extra broth and noodles, it fed the two of us generously with some leftover for my lunch the next day. Perhaps Nigel’s intention for Tender Volume 1 was not only to educate readers about how to cook and prepare certain vegetables, but to also encourage healthy eating of said vegetables through sensible portion controls. I think eating more vegetables, and vegetarian meals in general, is already a congratulatory start for us in this New Year; I might focus on the petite serving sizes another time. So below is my adaptation of Nigel’s recipe for more generous portions. 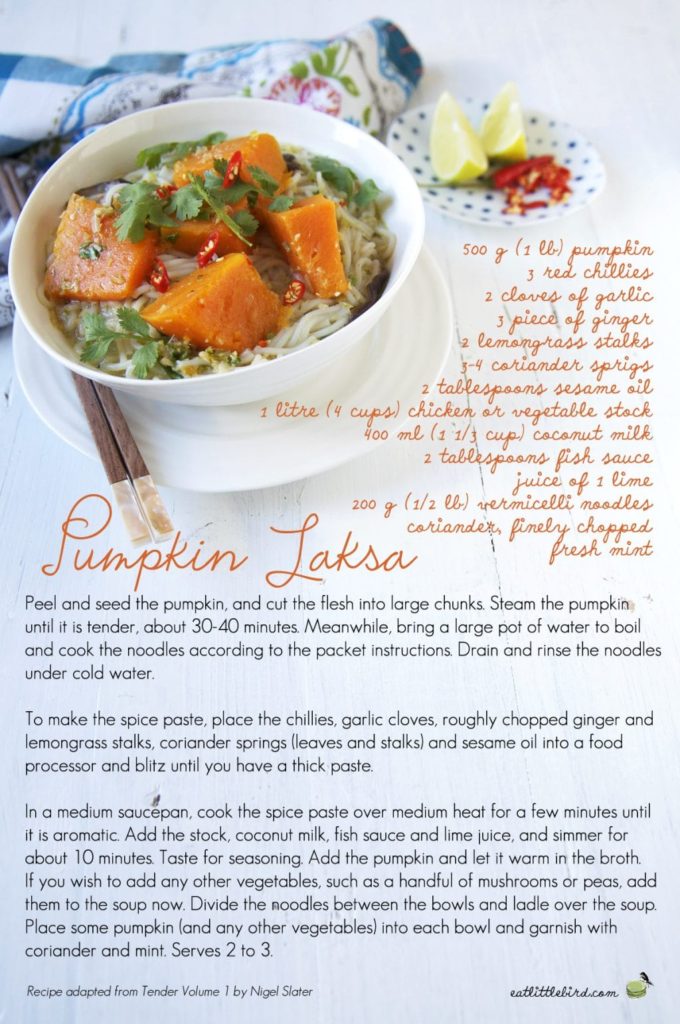