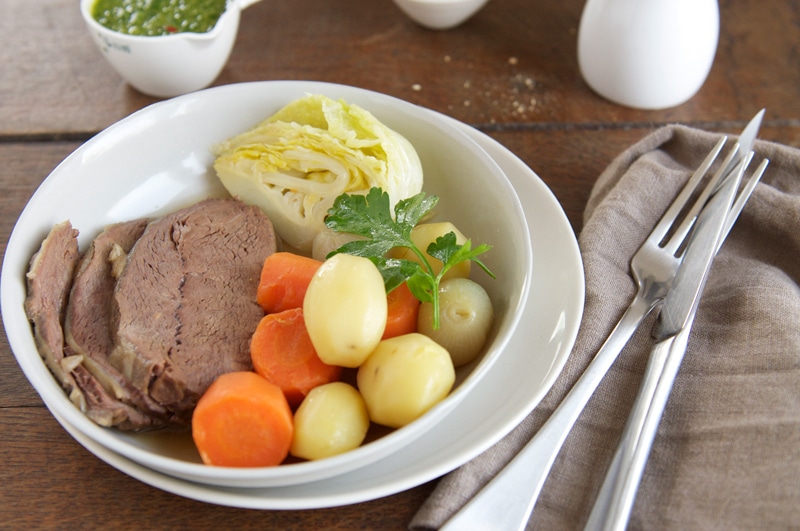 Pot-au-feu literally translates into English as “pot on the fire”. It is a classic French beef stew, a peasant dish at heart. Traditionally made from beef bones and stewing beef, the broth is typically served as a clear soup, preceding the main dish of sliced beef with vegetables which have been cooked in the broth. It is honest and hearty French fare. Although the dish may take several hours to cook, you are not required to do much during this time, other than to skim the surface of the soup and to check that the meat is continually submerged. This makes it an ideal dish to make when you have time to potter about the kitchen and can look forward to a simple, yet satisfying, supper.

Recipes abound for pot-au-feu and they are all variations of the same blue-print. The beef bones are necessary to add richness and depth to the soup, and oxtails are perfect for this type of cooking, in part because you can also eat the tender and sweet meat later. But the stewing beef is what is traditionally served at the table, so you should find a cut which needs a few hours of cooking time, such as beef brisket or beef shank. In Switzerland, the beef is often labelled “Pot-au-feu”, making it clear what the cut is intended for. But “Bouilli de boeuf maigre” is also a good choice. In Australia, I recall buying cuts of meat simply labelled “soup beef” which would be perfect here. You could also use beef cheeks, which are wonderfully tender and flavoursome upon cooking, though they take longer to cook and you might need to order these from your butcher.

Aside from the meat, the broth is also flavoured with a traditional base of carrots, celery and the ever-present herb bundle in French cooking, the bouquet garni. A bouquet garni is usually comprised of fresh bay leaves, a small teaspoon of peppercorns, a small bundle of parsley stalks and a few sprigs of thyme, but the combination of herbs can often vary. Some supermarkets sell ready-made bouquet garni but they can be easily assembled yourself. I typically place everything directly into the pot because the contents will be strained before serving, but you can wrap the bouquet garni in some muslin or cheesecloth for easier removal from the broth.

After a few hours of cooking, most of the vegetables will turn to mush, so a fresh batch of vegetables is added to the pot for serving. Carrots, potatoes, turnips, cabbage and the like are traditional, but what you add is really up to you. 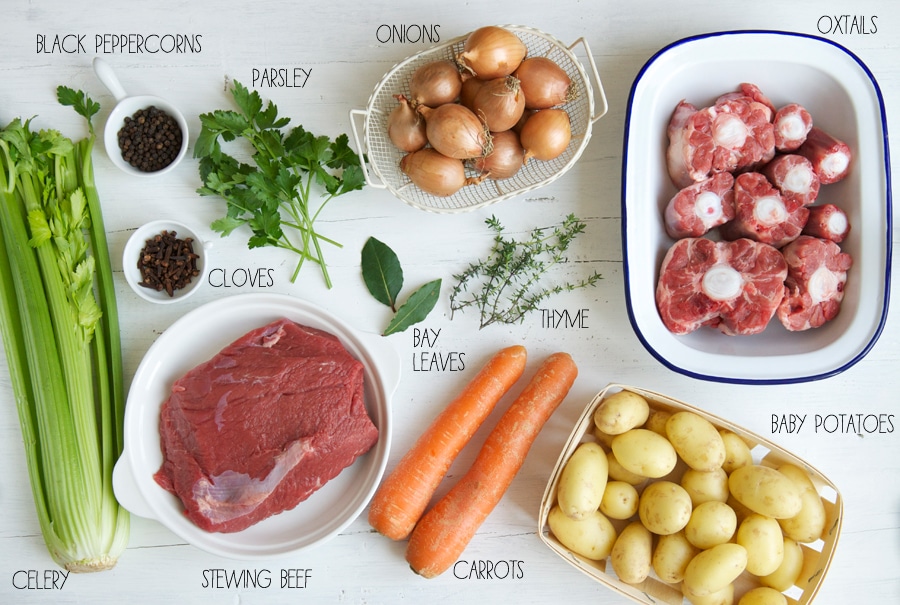 To serve, simply slice the meat thickly and serve with the freshly cooked vegetables. It is a rather simple meal, requiring nothing more than perhaps mustard and cornichons on the side. A meal to comfort.

But despite the refined and elegant flavours of traditional French cooking, I will go out on a limb to say that it is not exactly a cuisine which packs a punch; everytime we return from France, I always find myself seeking out a meal with an unapologetic burst of flavour … with maybe a squirt of Sriracha sauce on the side. That’s not to say that French cuisine is not flavourful, but there have been many instances where I have felt that my palate for spice could not be answered by French cuisine alone.

So when I saw Rachel Khoo’s recipe for pot-au-feu and her suggestion to serve it with a Cream Sauce and Spice Green Sauce, I was instantly charmed and set about making her recipe in full. For those who have not heard of Rachel Khoo, she’s the new chef on the block, the British Amélie of the kitchen as she calls herself in her new cookbook, The Little Paris Kitchen. I wasn’t sure if I needed another cookbook on French cuisine to add my burgeoning cookbook collection (or another cookbook for that matter), but Rachel Khoo’s fresh take on French cooking is exactly the encouragement I need to cook more French food, even if my French husband is a bit skeptical of her version of the French classics. 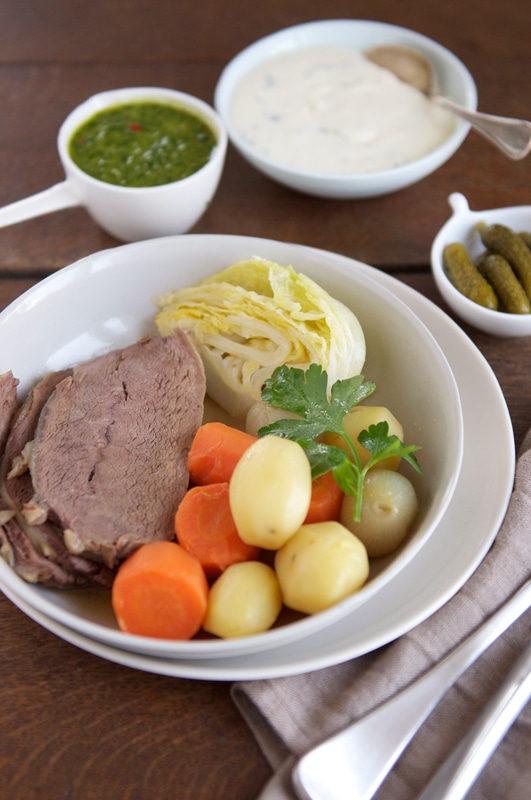 And despite his initial complaining that the Cream Sauce and Spicy Green Sauce were “not necessary”, he graciously helped himself to many servings of the Cream Sauce alongside his beef. And whilst I was a bit hesitant to replace my usual serving of grainy mustard, the Spicy Green Sauce was a surprising and superb accompaniment. The vinegar and the chillies did wonders to lift this otherwise simple dish into something that would satisfy any craving for heat. I felt a guilty pleasure in having chilli with my pot-au-feu, guilty because it was almost akin to asking the host for ketchup. For me, it made me look at pot-au-feu in a new light. I wonder what my mother-in-law would think if I were to bring this vivid green concoction to the table at our next Sunday supper?

The original recipe for the Spicy Green Sauce uses curly parsley, and half a bunch at that. I rarely buy curly parsley so I used the flat-leaf variety in my sauce. Initially, my sauce was too liquid and I realised that, of course, a bunch of parsely in France is perhaps more generous than that offered in other countries. So I added more parsley to get a texture similar to pesto.

The Cream Sauce is perhaps misleading in name as it is made from crème fraîche, mixed with some chopped cornichons, mustard and lemon juice to give it more piquancy. This sauce lends a lovely, tangy flavour to the pot-au-feu, perking up the meat and vegetables.

All in all, Rachel Khoo’s recipe for Pot-au-feu, together with the Cream Sauce and Spicy Green Sauce were a winner for me. I loved that she took a French classic and gave it a fresh twist but which is still somewhat faithful to the ingredients typically found in a French pantry. I can’t wait to cook more from this book! 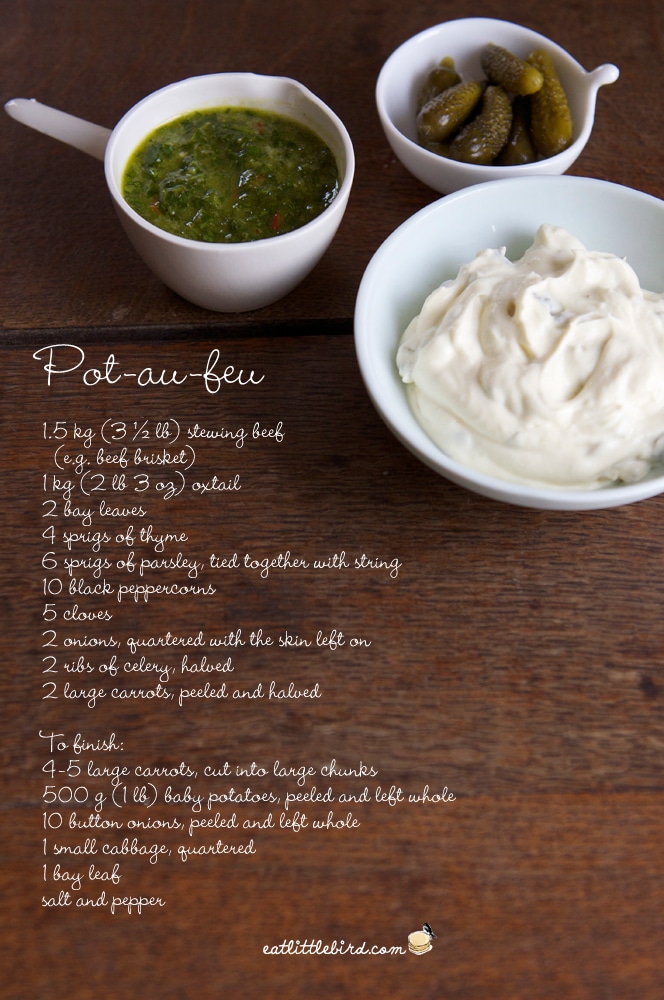 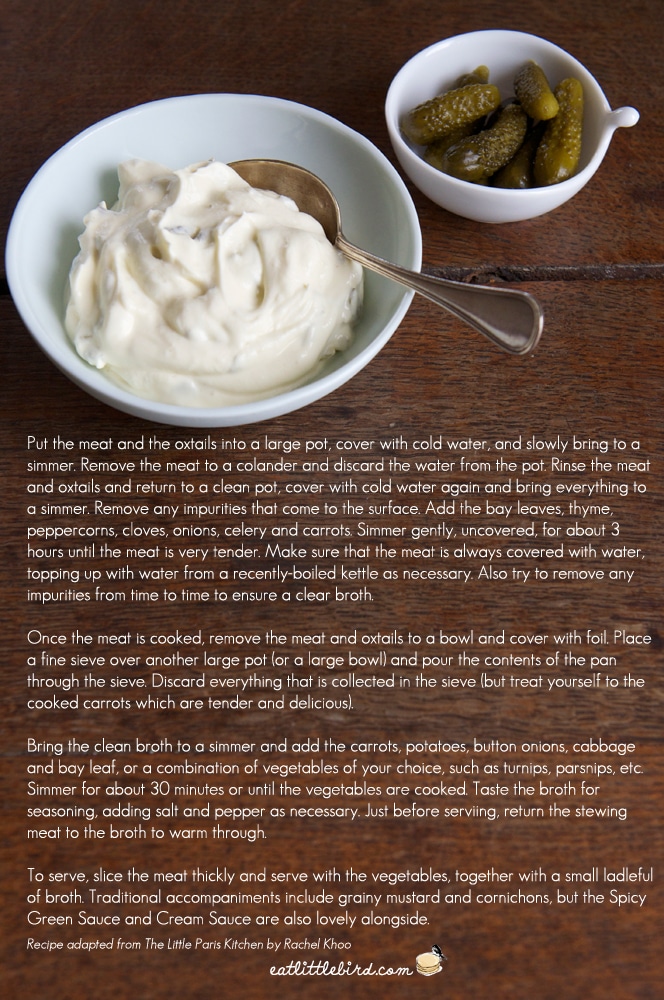 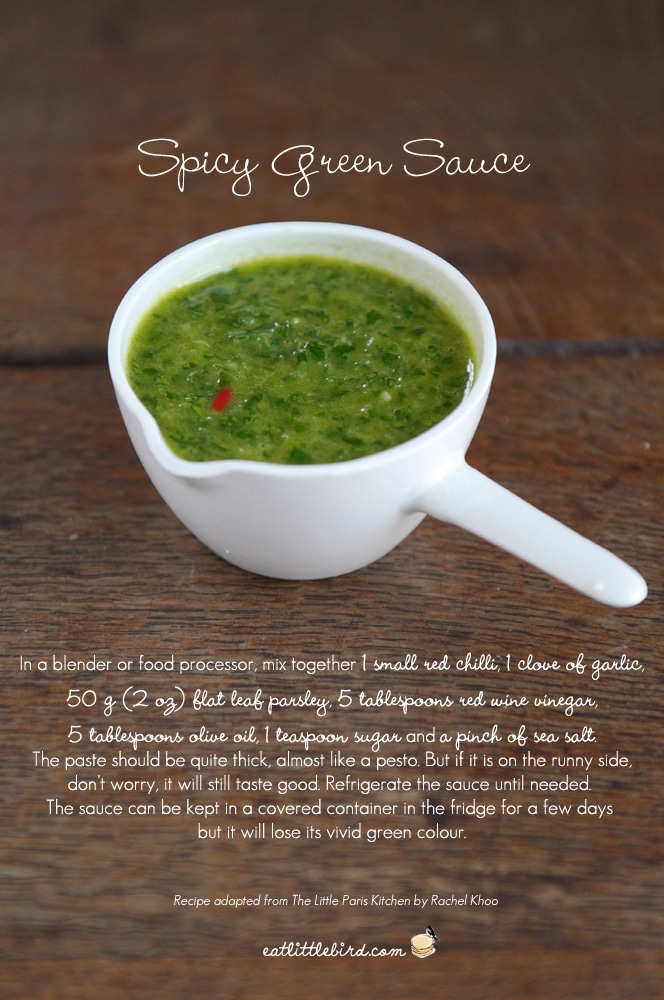 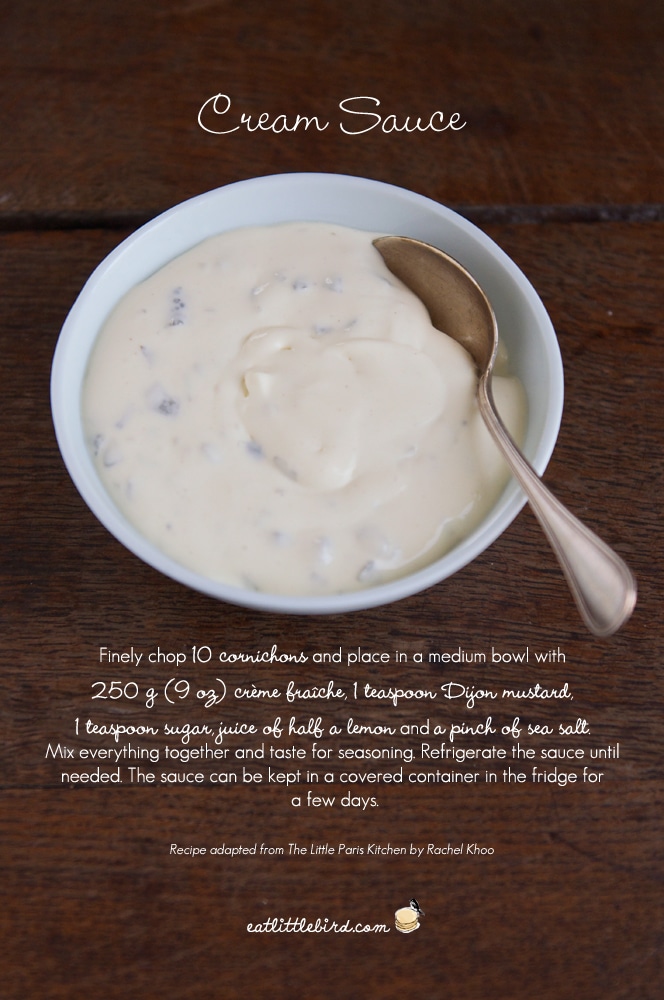 For those with a Vietnamese heritage, you might recognise that “pot-au-feu” sounds a bit like “Pho”. Indeed, theories abound that the classic Vietnamese beef soup borrows from the French original, a notion which is abundantly apparent when you compare recipes for both classic dishes.

A typical Pho recipe uses oxtail and stewing beef for the soup base. But instead of the vegetables and bouquet garni for flavour, the Vietnamese typically add an onion and piece of ginger which have been chargrilled beforehand, together with spices such as star anise and cloves, along with the usual Vietnamese flavourings of fish sauce, salt and sugar.

Given the time taken to brew a pot of Pho, not to mention the extravagant cost if you live in a country where meat is a small fortune (I think peasant dishes in Switzerland are based more on potatoes than cheap cuts of meat), I love to make a big pot of Pho and invite friends over to share in this abundant meal. 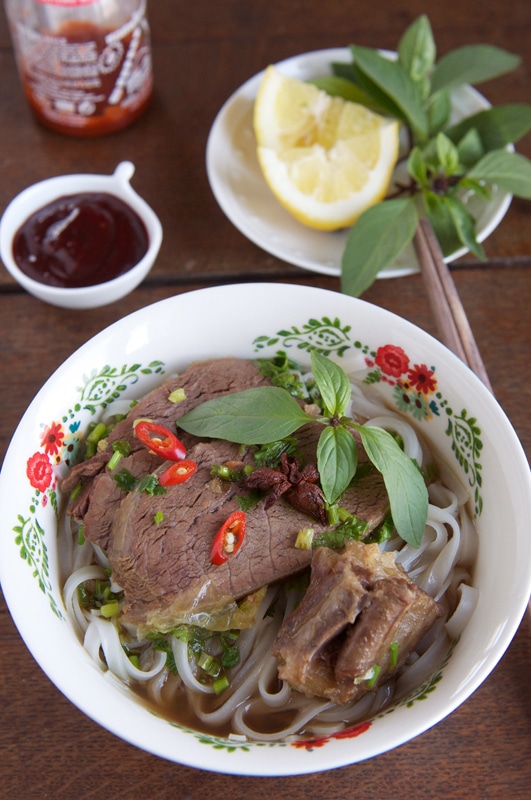 But as hubby and I did not use the broth from the pot-au-feu, I was curious to find out if I could transform this French broth into an aromatic Vietnamese soup. The pot-au-feu broth is quite sweet from the celery and carrots, and the bouquet garni certainly lends an aroma which you would not find in Vietnamese cooking. But a gentle simmer with some sliced ginger and star anise, together with a dash of fish sauce and followed by some chopped coriander (cilantro) and Thai basil, slowly transformed this broth into something more familiar to me. The broth did not taste like an authentic Vietnamese Pho, but it hit all of the right notes and tasted quite delicious! To know that I can make a Frenchy Pho each time I make pot-au-feu is an absolute delight! Best of both worlds, I think 🙂 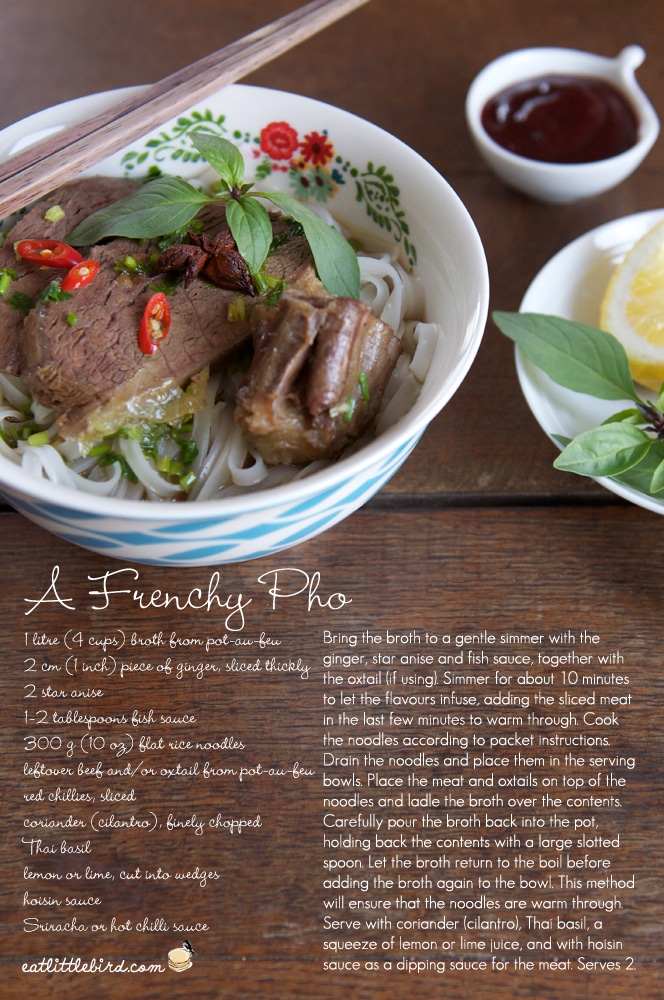