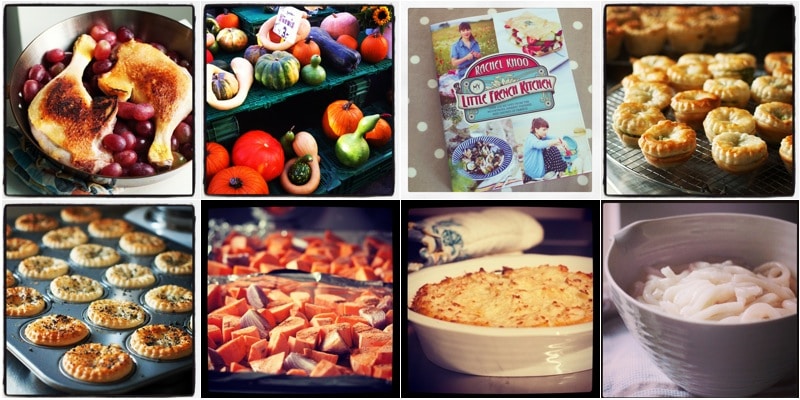 Since my last post, I’m happy to report that our cocktail party went off without a hitch and the evening was a roaring success, if I may say so myself. Our large buffet in our dining room was actually used as a buffet for the first time ever, where we laid out bowls of homemade hummus and black olive tapenade with Swedish crisp breads. On offer was also my Chicken Liver Pâté with Green Peppercorns, served with a Sauternes jelly, an idea which I saw in Pete Evan’s My Party and from where I also got the recipe for his Mushroom Tarts. We typically serve pâté with Sauternes, Barsac or another sweet wine, but this Sauternes jelly was a fun and novel twist for our wine connoisseurs. (We still kept a bottle of sweet wine nearby.)

For our vegetarian friends, I made a serve of Nigella Lawson’s Potato Cakes just as our guests were arriving (we were running a bit behind schedule) to serve alongside some smoked salmon with capers and cornichons. This is a recipe which I love to make for brunch, but having now whipped it up in less than five minutes with about 10 minutes of cooking time, I can’t think of a more failsafe recipe. Perhaps it is because Nigella uses instant mashed potato flakes in her recipe instead of “real” potatoes, but no one really needs to know and I don’t think anyone would really mind either.

Just as our guests became settled and had had a bit to eat and drink, I brought out little espresso cups filled with Roast Pumpkin & Sweet Potato Soup. It was a lovely surprise for all, as well as a welcoming starter given the cool weather outside.

And as the night rolled on, hubby fired up the barbeque on the balcony and grilled skewers of chicken marinated in coriander, ginger, garlic and chillies, as well as individual skewers of prawns which had been marinated in garlic, chillies and lemon.

And then there were also the Little Aussie Meat Pies by Katie Quinn Davies, a recipe which has since been included in her cookbook, What Katie Ate. In addition, I made mini spinach and feta pies for the vegetarians but which I think were more of a hit with the meat-eaters! I’ve received a lot of emails and messages for the recipe so I will do a special post on these soon.

If our guests thought there was already too much food, there was still dessert … stay tuned for my next post!

In other news, I was giddy with excitement this week to receive a pre-ordered copy of Rachel Khoo’s new cookbook, My Little French Kitchen. I’ve had such a delightful time cooking from her previous cookbook and, so far, the recipes in her new book look just as lovely and tantalising. I recently made the Crispy Duck with Roasted Sauternes Grape Wraps , a sort of French play on Chinese Peking duck. I took the liberty of rendering the duck fat first before proceeding with the recipe, and the duck legs ended up wonderfully crispy. The roasted grapes are then blended together with some chilli sauce to go alongside the duck. My tip would be to first blend the grapes with just the chilli sauce and to only add some of the pan juices to thin out the sauce as needed; I followed the recipe closely and ended up with a sauce which, although was nice and perfectly sweet-tasting, was a bit too runny and made the wraps a bit sloppy to eat.

As the ducks required about 2 hours in the oven, I somehow found the time to make some Chinese pancakes in case the lettuce wraps were a bit too light for dinner. I found a recipe in Leemei Tan’s beautiful and evocative cookbook, Lemongrass & Ginger, which was both a breeze to make and tasted better than any that I’ve eaten in Chinese restaurants.

Follow me on Instagram to see more of my daily snaps in the kitchen, as well as out and about in Zurich.