Merry Christmas and Seasons Greetings to everyone!

I hope you have had a wonderful season cooking and baking your Christmas favourites, as well as being inspired by some new recipes.

I know I have previously mentioned that I am not a great fan of fruit mince. That still remains the case, but I cannot conceive a Christmas without mince pies.

I try to resolve this conundrum by either making mince pies with really thick pastry and minimal filling, or just really, really tiny mince pies.

For the latter, I like to resort to Nigella’s tried and trusted recipe for Star-Topped Minced Pies from How to Be a Domestic Goddess.

This year, I tried my hand at making the Cranberry-Studded Fruit Mince from Nigella Christmas. The cranberry fruit mince itself is quite quick and easy to make, provided that you have easy access to fresh or frozen cranberries where you live.

This mince pie recipe recipe starts by dissolving some sugar into some port, which instantly provokes the scent and aroma of mulled wine, something which I love and is indeed very Christmassy for me.

There is no getting around the dried raisins and currants which are essential to fruit mince, but the cranberries provide a nice tart flavour to remind you that it is not all dried fruit.

Though, the cranberries which I used were a bit too tart and I found that I had to add more honey than specified in the recipe to sweeten the mixture; in hindsight, I probably should have just added a tablespoon or two of caster sugar.

This pastry is something which I use every year for my mince pies. It is easy to make and easy to work with.

The pastry should ideally be kept cold before rolling out, otherwise it will shrink considerably upon baking.

I use a small tart pan which produces wee small mince pies which are perfect for eating with one bite. They are perhaps a bit more fiddly to make but I find the pastry to fruit mince ratio perfect 🙂 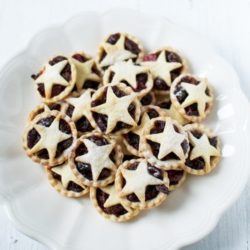 For the Cranberry-Studded Fruit Mince

For the Cranberry-Studded Fruit Mince

CONVERSIONS To convert from cups to grams, and vice-versa, please see this handy Conversion Chart for Basic Ingredients.