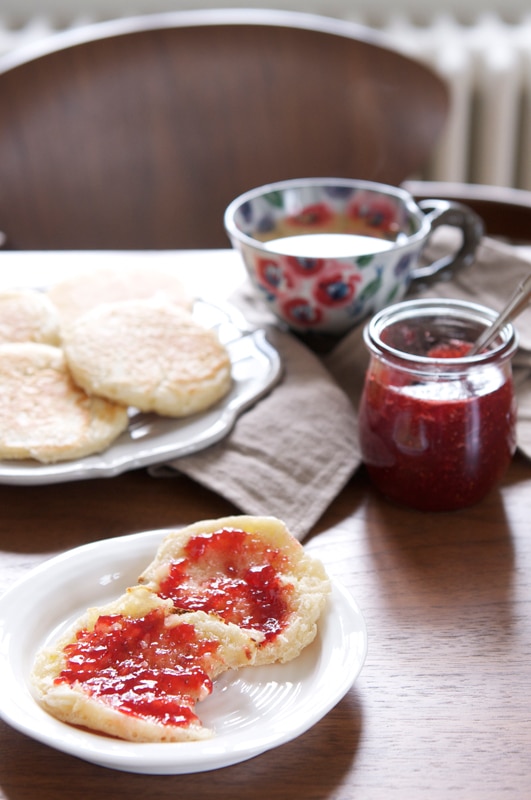 I had a sudden inkling to make crumpets the other day, somewhat unusual because I was only ever a mild fan of these yeasted breads when I was a child. My memories of crumpets are of the shop-bought kind which were round, thick and spongy in texture. Once lightly toasted, a generous slather of butter was obligatory, as was a good dollop of runny honey or jam. As a child, perhaps the allure of crumpets was watching the butter and honey disappear into the many little holes (or, rather, air bubbles) on the surface, which would inevitably end up dribbling down your chin as you took a bite into the warm bread.

Perhaps it is because I’ve had more time to contemplate breakfast lately that crumpets came to mind, and coupled with my New Year’s resolution to bake more with yeast (which I haven’t ventured near since typing up those resolutions), that I committed myself to the task of making them at home.

A quick flick through Bake by Rachel Allen revealed a relatively simple recipe with ingredients that I already had in the fridge and pantry. As with most recipes by Rachel Allen, the instructions were clear and easy to follow, and I felt another successful recipe in progress. That was until it was time to cook the crumpets and confusion set in.

In the introduction to the recipe, Rachel Allen writes, “Split them in half and the butter and jam or apple jelly melts deliciously into all the little holes.” The reference to the “little holes” suggested that what she called “crumpets” was what I had in mind, but to “split them in half” meant that her crumpets were more akin to English muffins. The crumpets from my memory were smooth, flat and golden on one side, and pale and bubbly on the other – no splitting required. Which then got me wondering if perhaps shop-bought crumpets were already split when packaged? I can’t remember. 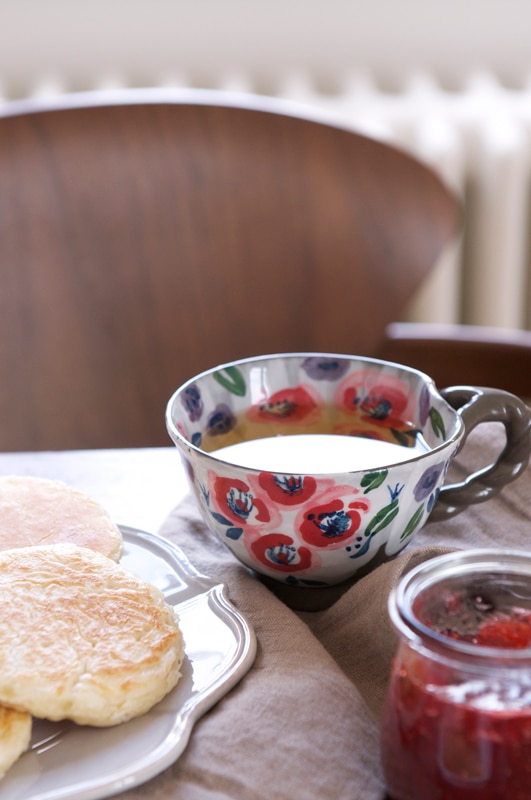 Minor confusion aside, these crumpets looked a lot like English muffins but were much lighter and fluffier inside. They also do not have as many little holes as the commercial crumpets, but I always wondered if the big manufacturers had some tricks up their sleeves in producing this little specialty bread.

Whilst these crumpets were not quite what I was expecting, they still tasted pretty good and were a welcome addition at the breakfast table. You can eat these crumpets warm, straight from the pan, but I like to lightly toast them to give them a bit more crunch.

This recipe yields about 7 to 10 crumpets, depending on the thickness of your batter and the size of your rings. 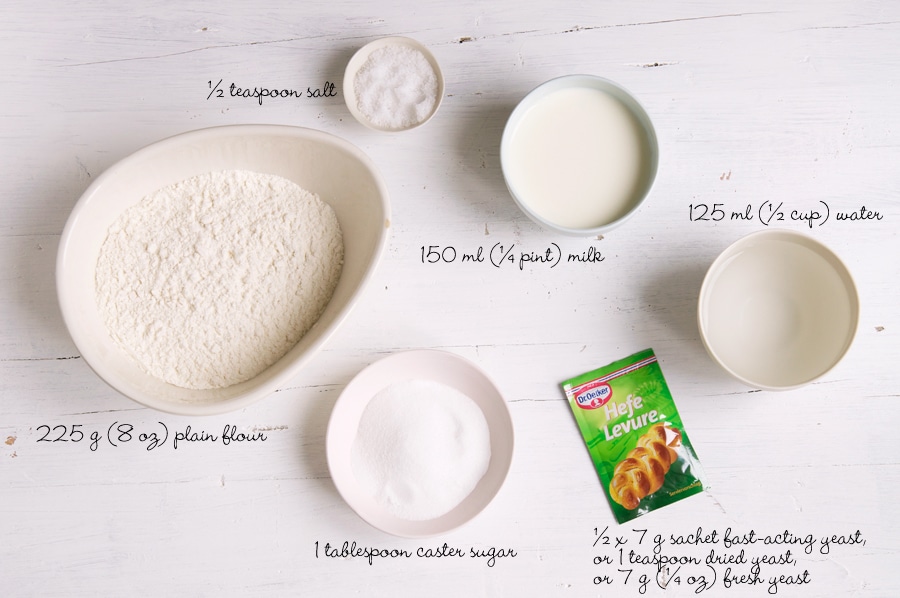 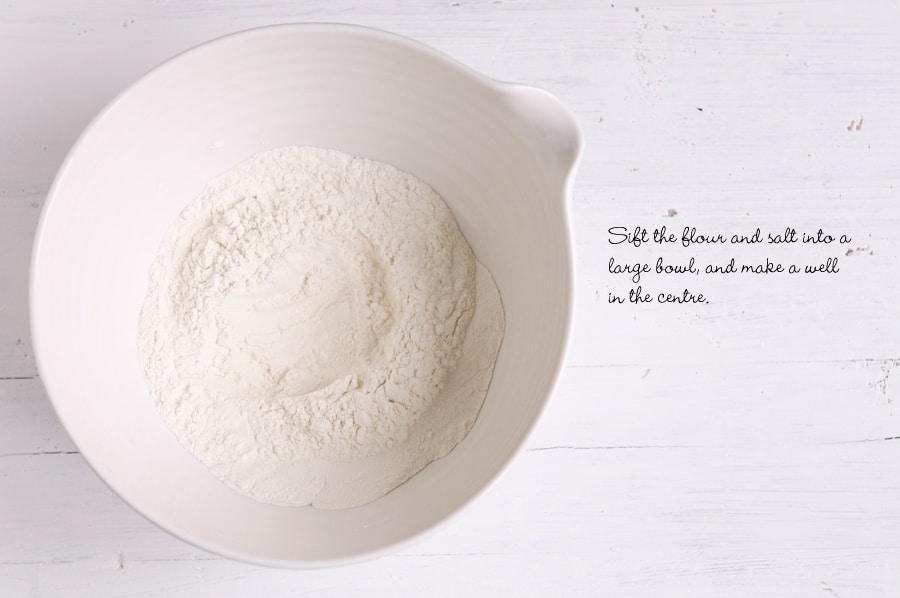 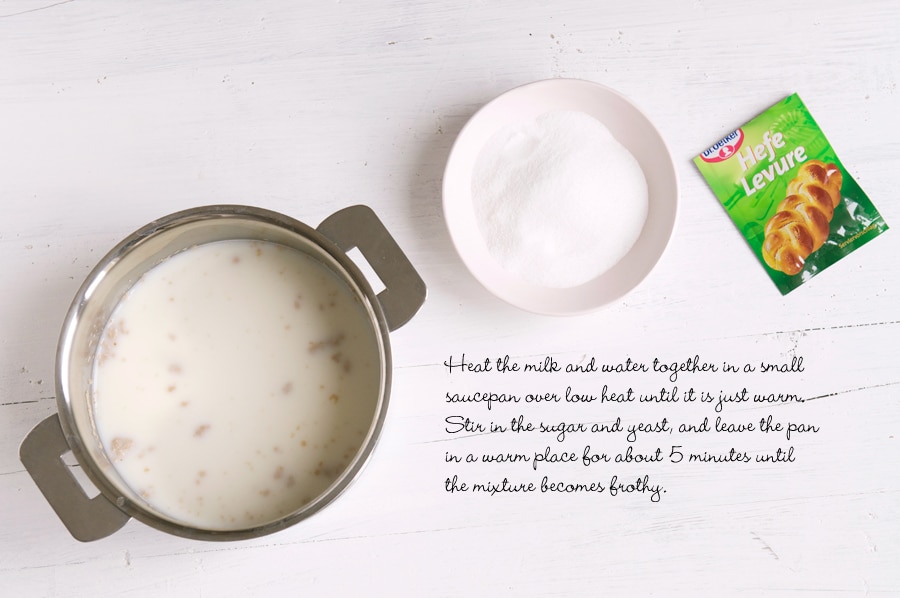 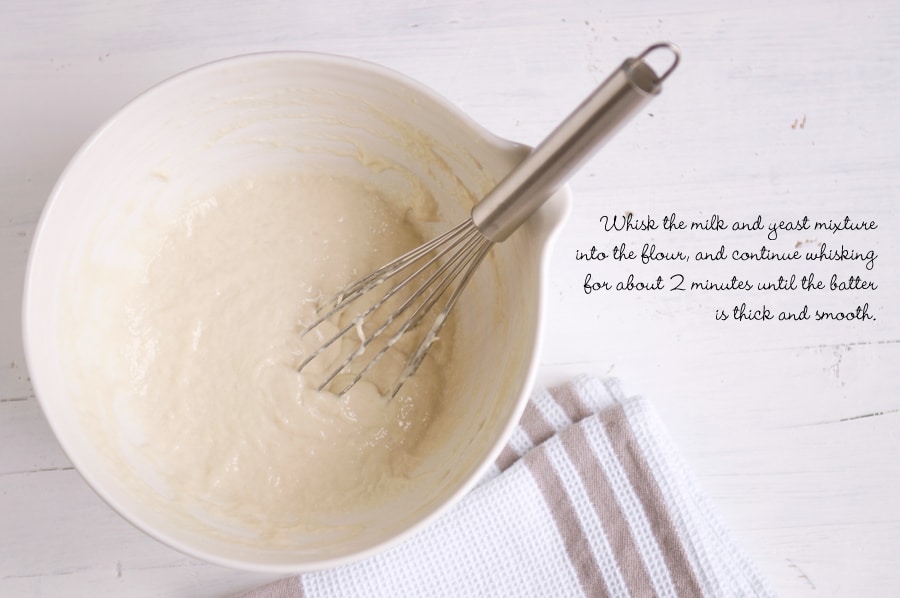 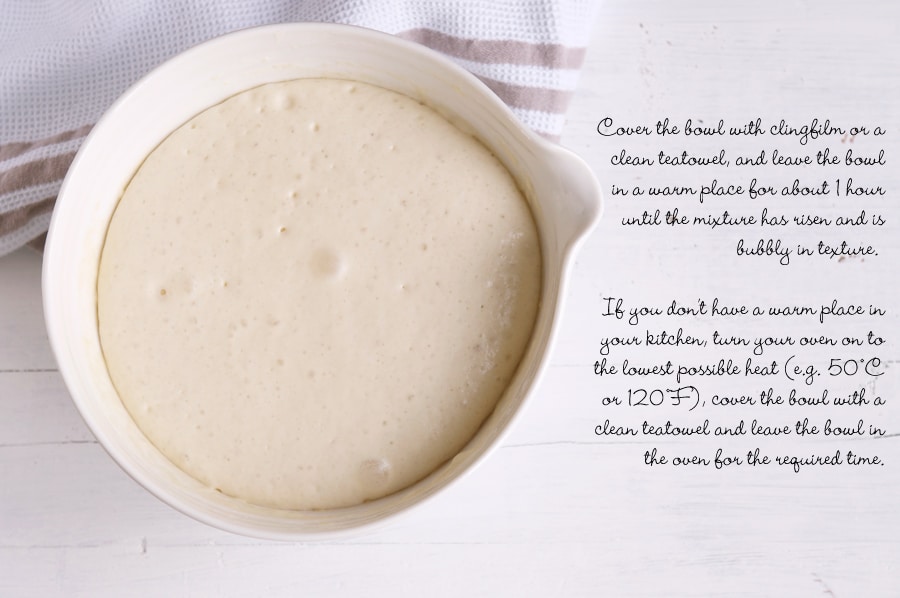 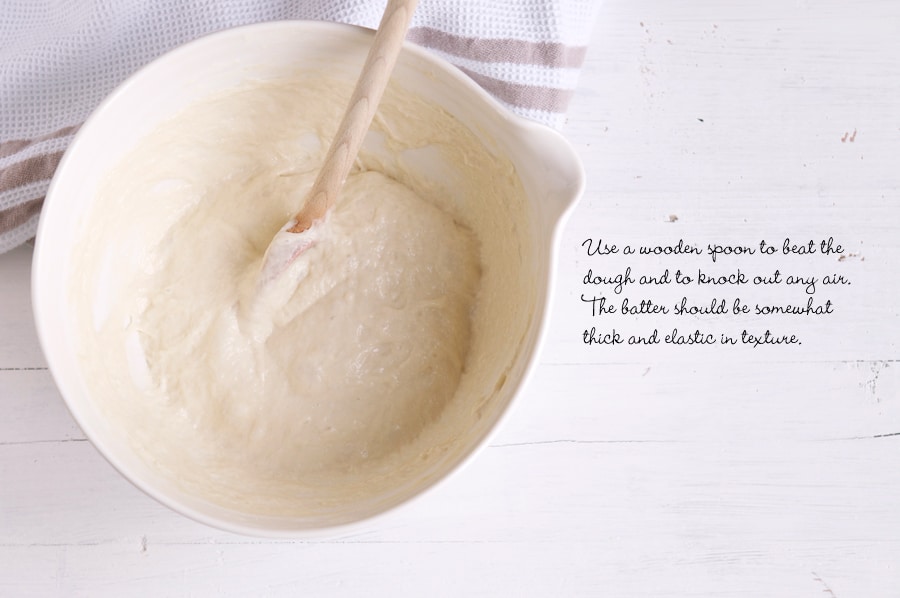 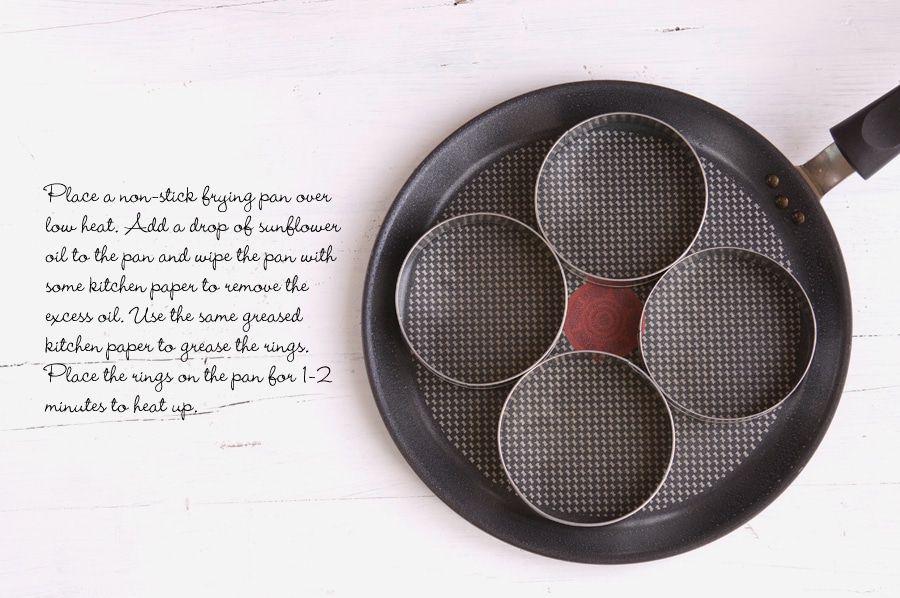 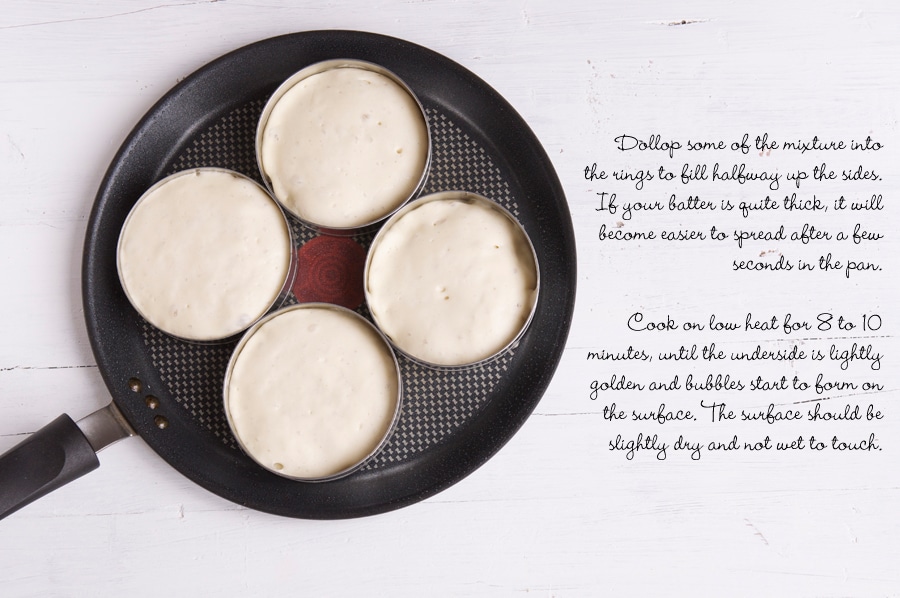 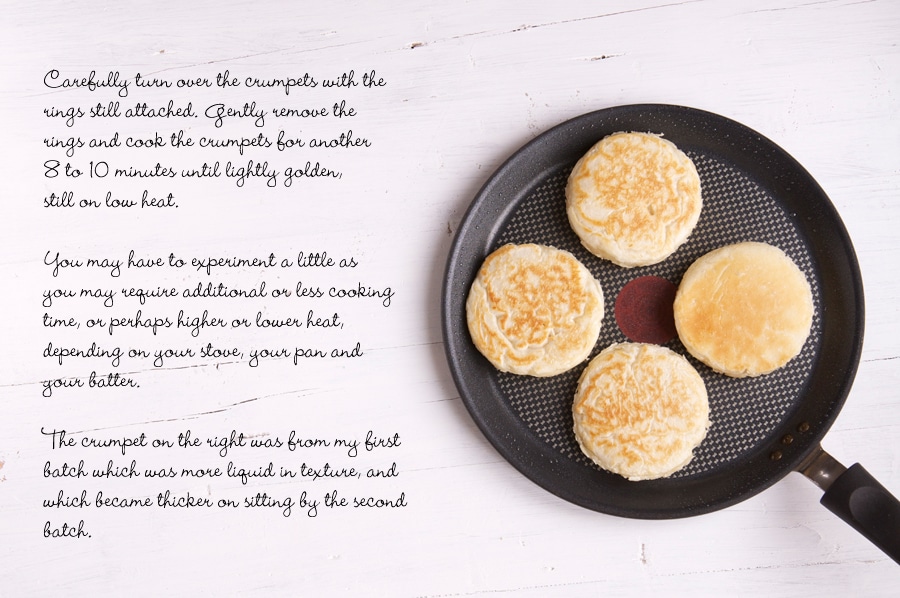 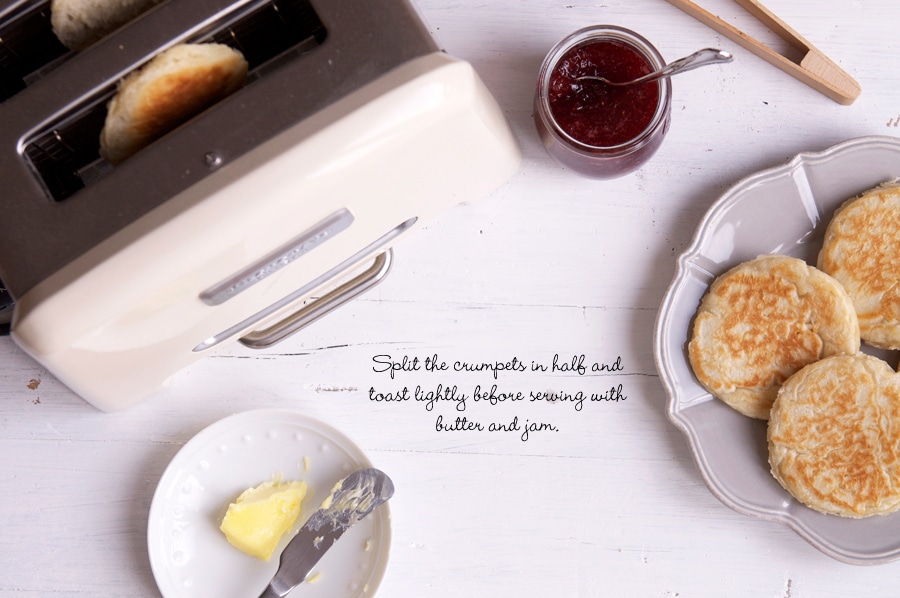 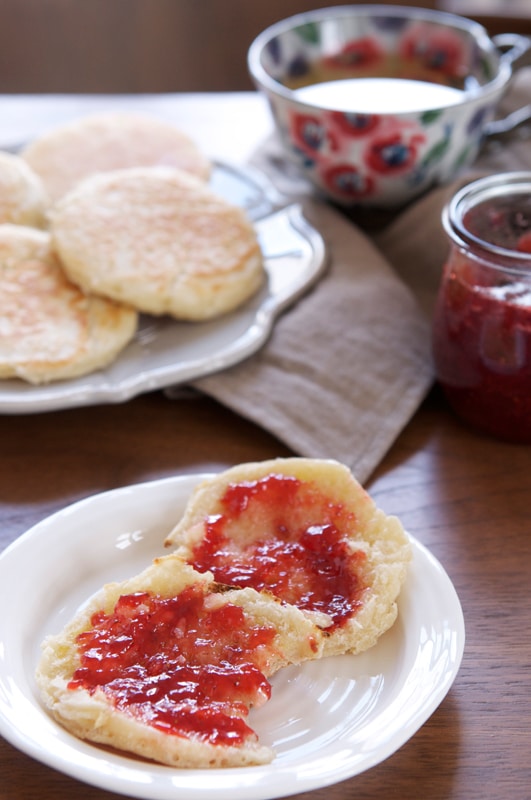