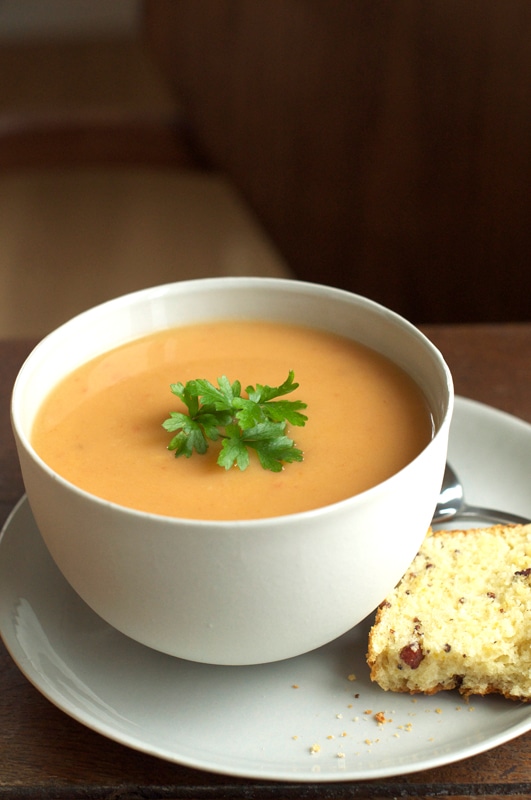 In case you were wondering what the soup is which is photographed with the Rustic Bacon & Cheddar Bread, it is the Cream of Tomato & Potato Soup from French Provincial Cooking by Elizabeth David.

Long before cooking became a passionate hobby and was more of a matter of survival for me, I heavily relied on cookbooks to put together really basic and simple meals like … vegetable soups. Yes, for something which merely required a few ingredients to be cooked together with some stock and then thrown in the blender, I needed careful instruction on how to do exactly that. And who else to turn to for motherly advice in the kitchen, when my own mother was absent, than Elizabeth David.

For those who do not know of Elizabeth David, she was a British cookery writer whose travels and adventures around the Mediterranean came to influence her way of cooking and eating and, in turn, introduced new flavours and exotic ingredients to her home country. She inspired home cooks and chefs with her simple and no-fuss recipes in the post-war era when British cuisine needed a boost of confidence after having been made weary from war rations and the like.

Looking back, I’m rather surprised that I managed to cook from a book which looked more like a history book and had no pictures, but after reading just a few words penned by this inspiring woman, I was instantly taken by her transporting memoirs and read most of her cookbooks as though they were novels. I daresay that her books were among those which started my love affair with food and cooking.

French Provincial Cooking remains one of my favourite cookbooks, my go-to book when I want to recreate some French classics, many of which are surprisingly dishes from my childhood. When my family were not cooking traditional Vietnamese dishes, the “other” meals were simply described as “French”, meals which my family in France and Switzerland were very adept at creating at home, not only because some French dishes had become well-known to the Vietnamese, but also because you would have been hard-pressed to find ingredients like coriander and lemongrass in continental Europe in the 1960s and 1970s, and my family had to adapt their cooking accordingly.

Owing to its simplicity, this soup happens to be my most-used recipe from French Provincial Cooking. You slowly cook some leeks in butter until they are tender and translucent, before adding some chopped tomatoes and potatoes, cover with water (I use stock), and later blend into a smooth soup.

I often serve the soup as is, with some bread on the side, or I frequently fry up some rashers of bacon and crumble this into the soup for a salty burst of flavour. I’m not sure if Elizabeth David would approve but she is the one who, after all, encouraged some intuition in the kitchen. 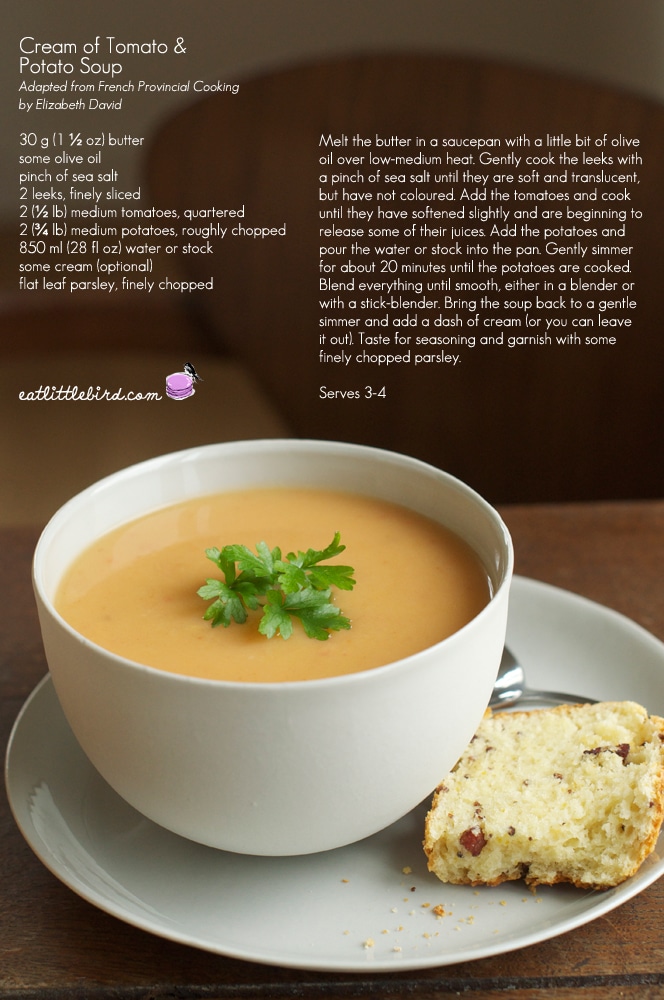