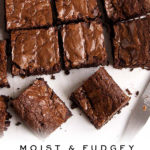 They say that anyone can buy a good house, but good neighbours are priceless. We happen to be blessed with the most wonderful neighbours in our whole building.

One particular neighbour is so sweet to occasionally leave boxes of Lindt chocolates on our doorstep, he being an employee of the local Lindt chocolate factory up the road. If you have had a horrid day at work, coming home to find a little treasure of pralines at your door not only does wonders for your spirit, but almost makes you believe in the fairy godmother.

So you can imagine my delight to come home one day to find not one, but two (!), 2.5 kg industrial-sized bags of artisan-grade chocolate chips on my doorstep!

Not quite like your average chocolate chips, these small, unpolished coin-sized pieces of chocolate are perfect for melting or for chopping to use in various baked goods. They come in a variety of grades which you can mix together to create your own custom blend of chocolate.

And what better recipe to show off good-quality chocolate than the humble chocolate brownie?

For a long time, I had been faithful to Nigella Lawson’s Snow-Flecked Brownies which first appeared as a variation to her Brownie recipe in How to be a Domestic Goddess, and which was later granted a special status as a recipe in its own right in Feast.

Nigella’s brownie recipe was quick and easy to whip together, not to mention fail-proof. It remained my go-to brownie recipe for perhaps a decade, a testament to my loyalty.

But then there were whispers in the foodie community that there was a better brownie recipe on the block, a recipe that was bound to convert anyone who had tried it.

That recipe belongs to Nigel Slater and comes from his evocative cooking journal, The Kitchen Diaries.

With a decent 250 g of chocolate in the recipe, plus a generous amount of cocoa, I had an inkling that this chocolate brownie recipe could not go wrong.

Upon biting into my first slice of this brownie, I needed no further persuasion as to which was the better brownie recipe. Nigel Slater’s My Very Good Chocolate Brownie Recipe is more than very good. They are, without a doubt, the best ever brownies.

Perhaps it is the top-quality chocolate which I used in this recipe which gives it the deep, dark, chocolate flavour. But the use of little flour in Nigel Slater’s recipe certainly makes the brownies less cake-like and more deliciously dense and fudgy.

As with any recipe where chocolate is the predominant flavour, you should use the best quality chocolate and cocoa you can afford.

I often use chocolate with 60% cocoa solids in my baking – it tends to be a good compromise if you are serving both kids and adults as it is not too sweet and not too bitter.

To that end, I don’t necessarily always use Lindt chocolate in my baking; given the amount of baking I do, I often opt for the supermarket brand (which, in Switzerland, is made by a reputable local chocolate factory anyway) and reserve the more expensive chocolate for special occasions where I definitely want the chocolate to stand out.

For this chocolate brownie recipe, I used Lindt Trinidad chocolate with 68% cocoa solids and Bensdorp cocoa from Dean & Deluca, the latter being a staple ingredient in my pantry ever since I first discovered it on a trip to New York.

I have read feedback from foodie friends who have tried the recipe below with milk chocolate (i.e., chocolate containing between 35% and 50% cocoa solids), and the resulting brownie is much sweeter and lighter in colour.

This is a fairly straightforward and easy brownie recipe. There is nothing particularly fancy about these brownies – there are no nuts, no fruit, no specialist ingredients.

Although, because it is a chocolate brownie, I do believe that you should use the best quality chocolate you can afford.

How to Make Chocolate Brownies

Start by melting the dark chocolate (bittersweet chocolate) in a bain-marie, or a bowl over a pan of simmering water. Once it has melted, set the pan aside to cool slightly.

Meanwhile, chop the remaining chocolate into large chunks which will later provide little nuggets of sweetness as you cut through the brownie slice.

Cream the butter and sugar in a large mixing bowl until it is light and fluffy. I like to do this with an electric stand mixer.

Sift all of the dry ingredients into a large bowl.

Add the eggs, one at at time, to the creamed butter and sugar, followed by a tablespoon of the dry ingredients to prevent the batter from curdling.

Once all of the eggs have been added, beat in the remaining dry ingredients, together with the melted chocolate.

Lastly, fold through the chopped chocolate.

Pour the batter into a square cake pan which has been lined with baking paper.

Baking brownies in a square pan makes a lot of sense because you will have a few fudgy slices in the centre for those who like their brownies really gooey, and the slices around the edges tend to be firmer, yet still wonderfully moist.

Bake the brownies for 30 to 35 minutes, or until a gentle shake of the pan shows that the cake has set in the middle (i.e. it doesn’t wobble).

A cake skewer inserted in the middle of the cake will come out a bit sticky, bit it should not have any raw cake batter attached to it.

Let the cake cool in the pan on a wire rack before slicing and serving. 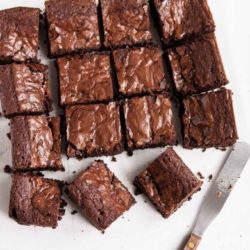 STORAGE
These brownies keep quite well for a few days under a covered dish, if you can manage to restrain yourself from eating them all in one sitting.

This recipe was first published on 24 April 2012. It has been updated with more comprehensive recipe notes.